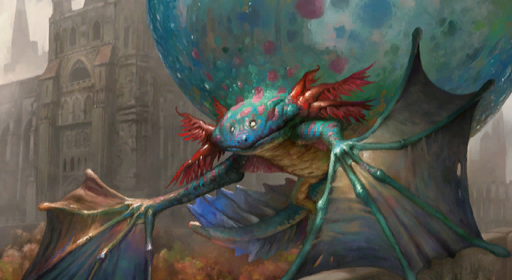 It's Autumn in Ravnica

Greetings once again, and welcome to the article series that appeals to more formats than your average column. That’s right, it’s 60 to 100 coming at you strong once again with another Standard brew that the new Ravnica Allegiance set has brought into the world, and turning it into a 100-card Commander deck!

This one is undeniably powerful. How can I be so sure? Oh, you know, because this deck recently won a Star City Games Open event... oh, and because: Autumn Burchett used this deck to take down the Mythic Championship!

That's right - we're talking about Autumn's Mono-Blue Tempo. Let's look over the list they used to become a champion:

Sleek, fast, and just wonky enough to keep you on your toes. I love it.

Every week it has been a blast to watch the Standard decks evolve; you can always bet that something new will come along, whether it's the five-color Gates deck, Jeskai Drakes making a comeback, or Esper Control slowing things down. This mono-blue deck picked up steam on Magic Arena, gathered quite the following from marquee players like Kat Light and other pros, and finally culminated in a spectacular finish at the first Mythic Championship. (Seriously, go watch the footage, it's a nail-biter.)

If you have watched or played any games with this deck, it almost plays like a Modern Delver of Secrets strategy. Play a solid threat early, turn it sideways, and protect it with just enough defense that your opponent never gets the chance to establish themselves. This list plays a few more threats than the Legacy Delver decks, but playing a load of one- and two-mana creatures followed up with counterspells and other sources of protection isn’t a foreign concept to tempo players around the world.

In fact, this week's deck is very near and dear to my heart, because one of the first real Modern decks I built was Merfolk, or, as I would often write on my decklists, "Mono-Blue Zoo." Standard's Mono-Blue Tempo isn't quite the tribal terror that Merfolk can be, but it definitely brings the beats in quick fashion, helped along by a bevy of really cool cards.

For example, one thing this deck does very well is keep resources available. Curious Obsession is almost a Curiosity for Standard players. Casting a Mist-Cloaked Herald and following it up next turn with Curious Obsession and a Spell Pierce to protect it has proven to be a very powerful way to start a game, making sure slower control decks can’t miss a beat. Even other aggro decks need to have answers quickly, or they risk falling behind.

In Commander, we still can follow this blueprint to success. While the early turns of many Commander games start with some tapped lands, maybe a ramp spell or two, setting up engines and all that, we can instead turn the game into a race and see who can’t keep up. Pteramander has worked its way into non-Standard formats, so why not welcome it into Commander as well? Sol Ring is overrated, let’s play Gudul Lurker instead!

Now that we know what we’re trying to do, finding a commander to lead the crew of tiny terrors is key. There’re actually quite a few different commanders that jump out. Staying in mono-blue, we could go wide with Talrand, Sky Summoner to capitalize on the spells we use to protect our team. Dropping a few cheap creatures and then holding up cantrips and counters isn’t a bad way to go. Alternatively, Thassa, God of the Sea makes it a little easier to push damage through, plus she helps keep us off of dead draws even when she doesn’t directly affect the board too much.

We could also potentially open things up to multi-color commanders. Surely there’s some goon you know who plays an Edric, Spymaster of Trest deck that turns tiny creatures sideways to draw fistfuls of cards so quickly you can't keep up. Well my friends, that's kind of the point, I guess. Make sure you have a ton of resources like Counterspell to protect your army, and swing like there is no tomorrow.

While all those are great choices for this style of commander deck, I don't think that the hate those three choices draw from the rest of the table is worth the hassle. Sometimes there are just some commanders that, while powerful, either aren't the most fun, or draw a ton of hate based off their reputation. Edric and Talrand are especially guilty of this.

If that's the case, we're going to go down a different path. Let's get us a recent legend who can help us quite a bit with all our twerpy little creatures.

Perfect. She's mono-blue and cares about the number "1." I'll be honest, at first, I overlooked the fact that Tetsuko Umezawa, Fugitive's ability cares about power or toughness. Once I started looking at the Top Cards on her EDHREC page, it all started to make sense. With cards like Tandem Lookout and Master of Waves, we could almost make a "2/1 Tribal" theme deck! I won't go that far down the rabbit hole, but it's a fun theme idea. In our case, it's a great start to make sure our opponents never get the chance to catch up with our pesky beaters.

With Tetsuko Umezawa, Fugitive at the helm of this tiny blue aggro deck, how do we want to up the ante? There are plenty of ways to do better than Curious Obsession in a game of Commander. Curiosity is a good starting point, but even in a deck of little creatures, we can go a little bigger. How about Coastal Piracy and Bident of Thassa? In the Standard version of this deck, we'd usually just focus on once creature to attack, to draw us cards, and to protect, but here in Commander, we can flood the field and draw four or five cards each combat step. Like Curious Obsession's amazing card advantage in 1v1, Piracy and Bident will be instrumental in terms of overwhelming the table with resources.

It's a shame blue doesn't have much in the way of double strike, though from a design perspective, that's probably a good thing; decks like this, with lots of "when this creature deals combat damage to a player" abilities, would very quickly get out of hand. Naturally, priority one is to draw cards with our little creatures, but there are lots of other effects we can make use of as well. [el]Mistblade Shinobi[/el] and Sigil of Sleep are two peas in the same bouncing pod, given how well they're able to keep enemy creatures off the table. (Just be careful not to poke the Brago, King Eternal player's creatures, otherwise that might backfire.) If you can stack those bounce effects with a Riptide Pilferer, returning a creature and then forcing the player to discard that card, you surely have a nice disruptive gameplan to go along with your own card advantage engines.

In fact, we shouldn't stop there. We can go for some massive damage triggers. Quietus Spike is one of the biggest and scariest on-hit effects we can add, making even the Soul Warden player nervous. Our little creatures will appreciate the big loss of life, putting them in much closer reach of dealing lethal damage.

We can also always just draw a mass of cards off one creature. Surrakar Spellblade is one of the most expensive cards in the deck (three whole mana?!?!) but it's a powerful option when combined with all our low-drop, easy-to-cast spells. Rootwater Thief also does a fine job in the damage-dealt triggers by making sure that even the scariest threats our opponents have in their decks will never see the light of day. Anyone who says "One damage isn't that much" obviously never played against a deck like this!

Now, let's take a peek at this Tetsuko "Death by a Thousand Cuts" Umezawa brew!

There you go folks. A quick-hitting, card-drawing, bounce-housing son of a gun. Pteramander will feel right at home with its peers.

What do you all think? Are Sapphire Medallion and Kefnet's Monument wasted here or are they a fine chance to make the fast even faster? Should we keep the mana curve this low, to keep the deck as aggressive as possible, or are there some high-cost spells we ought to squeeze in? Are there any synergies I'm overlooking? Let me know in the comments!