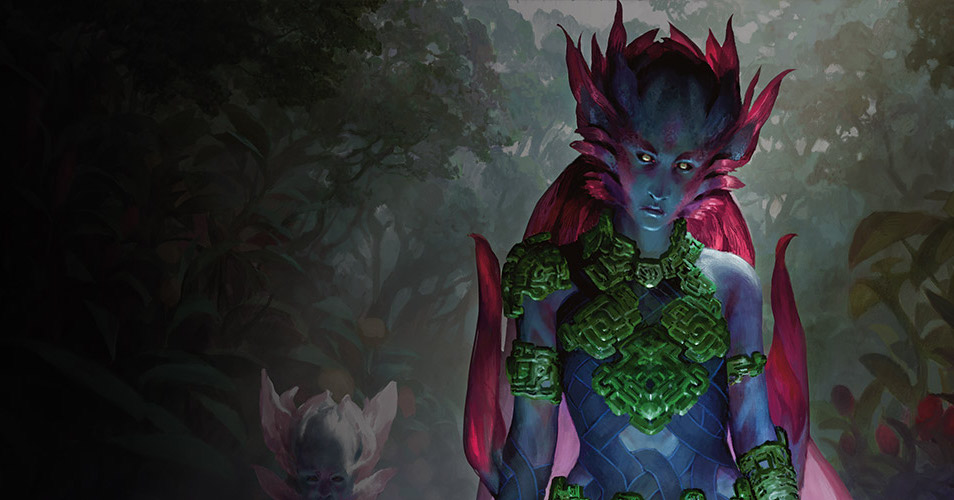 So one thing I'm personally very excited about is the flurry of new merfolk coming out in Ixalan and Rivals of Ixalan. I REALLY wanted to update my Sygg, River Guide (which I initially wrote about here) deck after Ixalan came out and change it into blue/green colors instead. The problem was that Tishana, Voice of Thunder didn't come across as anything special and is just a worse version of Prime Speaker Zegana if we're going to be honest. Thankfully, patience was rewarded. Kumena, Tyrant of Orazca arrived and might be one of the best tribe specific commanders out there. No, that was not a challenge. Yes, I'm sure your Wrexial, the Risen Deep kraken tribal is super cool and crushes your little brother's deck all the time. Across a wide spectrum of tribal decks though, Kumena's abilities are just so...fishy. Not stinky or suspicious, but merfolky. Unblockability? Check. Card draw? Yup! Pumping the team until they are unnecessarily huge too!? Duh! Remember this face. It's going to be showing up again.

So recently there was another Standard banning that completely shook up the format. Like, not just one, but TWO top decks got hit. This turned what many people assumed was a "solved," format into the Wild West of Standard, where nobody knows what is the best or not. This is a fantastic situation for those who love to brew, since everything is fair game and you could go to your local tournament and play a different deck each round. Well, our previously mentioned fish friend Kumena, Tyrant of Orazca decided to show up in this list in a recent tournament.

This guy knows whats up. Not only did he go deep on the tribal plan, but he played 61 cards in his main deck instead of the "correct," 60. Let's just take this slippery slope from 61 and take it all the way to 100. We've got some counters, tribal synergy, plus some locking down other creatures all to play with, perfect strategy for a certain legendary I know...

Jump Into the Deep End

It would be all to easy to just play blue/green merfolk here. While I love the thought of casting Kumena, Tyrant of Oraza early and often, I can't help but forget about my pal Sygg, River Guide. We had such great times together, I even wrote about him once before. I don't think I can just forget about him completely. Plus, Lorwyn block gave us lots of great merfolk in white to build off of. Quite the conundrum isn't it? Now the task is finding a white, blue, and green commander that plays into the strengths of the deck we are looking to play.

Let's take a look at the top played Bant commanders and see if there is someone we can turn to in our moment of need. Well, we didn't have to go too far to find what I think is the best answer there. It seems pretty obvious actually. Tapping and untapping permanents...cheating mana costs....built in evasion...yep. Derevi, Empyrial Tactician is pretty much a merfolk, only not. You know how Old Greg isn't quite a merfolk, but not quite a person? Derevi, Empyrial Tactician isn't fully bird and isn't fully merfolk either. Some sort of...scale-y birdfish. Weird aside...aside, taking a look at Derevi's EDHREC page we can even see that a whopping 1.4% of Derevi decks are already merfolk tribal! This means we don't have to lose out on some awesome white cards for our merfolk ensemble and we have color access to all the fishy additions, both old and new. We know our strategy now in abusing the tap/untap abilities of our creatures, especially when they connect with other players at the table, along with have color access to green and it's utility along with the Rivals of Ixalan merfolk that we get to play with now too!

So you may be wondering to yourself, "Matt, why would we want to play merfolk decks anyways? They're a bunch of 2/2's!" Well my friend, that's a great question. I will counter your question with my own question: Why not? But really now, merfolk is a deck that all the parts build upon each other where the whole deck is better than the sum of the parts. Tribal decks tend to do that, but merfolk especially are good at adding up and empowering each other. The 60-card versions play lots of "lord," effects between Lord of Atlantis and Master of the Pearl Trident type creatures pumping up the rest of the tribal team. The fun part about opening up our deck from any of its smaller counterparts to 100 cards is that we get to still be aggressive AND build in some ways to abuse their natural synergies and abilities. The merfolk from Lorwyn block care about tapping and untapping the creatures, but the new merfolk from Ixalan block care about +1/+1 counters and exploring their surroundings. Now that we're playing Commander, we can do BOTH!

You Get the Best of Both Worlds!

You know all those sweet cards that people say are "too slow," for competitive formats? Stuff like Hardened Scales or Glare of Subdual? Luckily they work perfectly in our deck! They feed our deck's subthemes that merfolk are good at along with driving the snowball effect that tribal decks love so much. Whether it's finding different ways to put +1/+1 counters on our creatures with Path of Discovery or giving extra ways to tap our own creatures for free with Cryptolith Rite, moving the merfolk to Commander opens up the floodgates of toys to abuse our crew. So I heard you want to put counters on your stuff...

Fishing In the Deep End

Since we know we don't have to worry about leaving different strategies out, we can focus on what else we get to put in. I've been excited about playing around with Deeproot Waters in merfolk tribal decks since I first saw it spoiled. No, we're not fussing around with Aether Vial here, we're working for our creatures. Cheaters need not apply. To be honest, the fact that Deeproot Waters hasn't taken off in Commander yet surprises me. Being specific to merfolk decks DOES make it hard though. But the fun part is when we throw in a leftover from an elf players favorite deck in Cloudstone Curio even and we have one heck of a way to make an army of hexproof swimmer folk don't we? Back on that Kumena, Tyrant of Orazca train, Surgespanner seems like a surefire inclusion. People have been high on the card lately and it makes a lot of sense. Fallowsage is another one of those "Holy crap, I can't believe I get to do with for free!" effects thanks to Kumena, Tyrant of Orazca's abilities to let our creatures tap themselves. For free. Did I mention you can tap creatures for free? Kumena is the Viscera Seer of tapping effects. Then thanks to our commander's ability to tap OR untap permanents after Kumena deals combat damage, we can untap and DO IT ALL OVER AGAIN! Reeling it all in

And there we are! Our Kumena/Derevi mashup of fun goodness. Did I manage to capture the essence of both merfolk themes from when it's been featured? Let me know in the comments what you think, what I missed, or what you would didn't like. Thanks everyone!