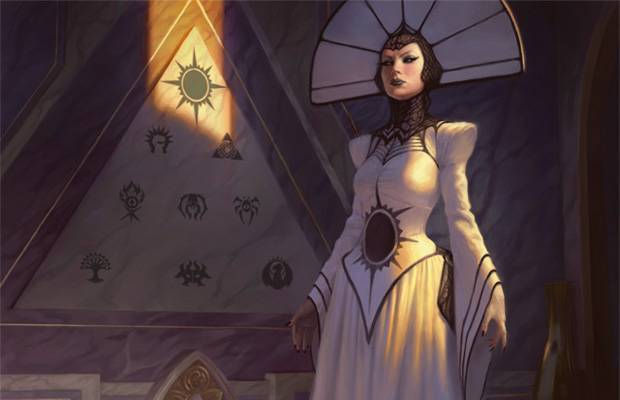 How do folks!? Welcome back for another edition of 60 to 100, where we accelerate our decks from 60-card formats to 100-card Commander piles of fun!

This week was a bit of a conundrum for me. I like brewing decks from scratch, maybe getting some ideas from some of my fellow writers at the site, polish off the list with some recommendations from the site you’re currently at and then tweak it from there. Getting a start with the deck is always the biggest step. Adjusting lists after you have the first build is where I have lots of fun.

So I’ve had this Alesha, Who Smiles at Death deck together for a while. It was the first foil rare I ever pulled from a pack so I was pretty excited. When I found out that the foils were…a letdown price-wise I decided instead of trading the foil for some other non-foil stuff I’ll actually use I decided to build a deck of dollar foil cards. This was fun for a while, but recently playing a deck with Priest of the Blood Rite as the best card was underwhelming to say the least. So this week instead of brewing something new or using a deck I already have, we’re going to update a deck I already have but take away the biggest restriction that kept some powerful cards out of the list. Plus, we already have Andrew and Bryce on staff who write some great budget articles and I want to maintain the illusion that I’m decent at what I do.

Since you guys have read my articles for a while, you know I love decks filled with cards that accrue value over time. Whether it’s Rhystic Study drawing lots of cards or Mycoloth creating an army, I love getting more than my mana’s worth out of cards. So when I saw this spicy number showing up in Standard you could say my interest was piqued…

It reminded me that for every Blood Artist there is a Zulaport Cutthroat to mess with too. Black value sacrifice effects are nothing new, Cartel Aristocrat was a very good card too and Viscera Seer is played in pretty much any black deck regardless of format for me.

The setup obviously has to change, if we’re keeping Alesha at the helm we can’t go the black/green route but we can play the “sacrifice our own dudes for gainful gainings” gameplan very well.

If I weren’t sold on keeping this an Alesha, Who Smiles at Death deck, there are a few super fun commanders we could go with to lead the deck. Athreos, God of Passage has his own following for being great while leading Shadowborn Apostles into battle, but that’s not us. While the ability is great and he finds his way into the 99 of many decks, that’s not what I was going for. Ravos, Soultender and Bruse Tarl, Boorish Herder almost took the helm of the deck in this process actually too. If you’re not a fan of the white/black color setup, the always popular Meren of Clan Nel Toth is the queen of value sacrificing effects and she has the deck stats to prove it. She was the queen of EDHREC for quite some time until she was taken down by the Commander 2017 gang. Black and green naturally line up pretty swell in terms of finding ways to generate extra value, and are just really friggin’ good on their own accord. If however, you want to play black and green but think Meren is too passe I am partial to Glissa, the Traitor as a fun alternative. Check out my previous build of her if you need some extra inspiration. A theme that I noticed as I began to rework the deck was there are a metaphoric TON of 0/0 creatures that aren’t really 0/0 creatures. They’re merely masquerading around as 0/0’s but are really oozing with potential to do some sweet stuff. Alesha’s attack triggered ability can grab any 0/0 in the graveyard, but they sure don’t enter as 0/0’s do they? Whether it’s Workhorse coming in to help ramp in a non-green deck or it’s Noosegraf Mob making an army of tokens over and over, some of the best creatures in the deck have the worst stats in your hand. Don’t even get me started about Pentavus either. That card is nuts in every good way. In my adventures(or misadventures if you think about it) I’ve found that there is nothing quite like beating your opponents with bad cards. I’ve developed a soft spot for that very reason for cards like Ponyback Brigade. It’s a great reanimation target for Alesha and makes comes with plenty of friends. Of all the carryover from the budget version of the deck, I can’t let this guy go. Red may be the worst standalone color for the Commander format, but that doesn’t mean it can’t be the most insane now and then. Whether it’s Siege-Gang Commander or any of our other go-wide cards, spamming them with Purphoros, God of the Forge makes every game a crapshoot. I’m not here to tell you Purphoros is a crazy good Commander card, but that doesn’t mean I won’t remind you either. Are You Willing To Sacrifice Our Love?

Finally, it wouldn’t be worth calling this an Aristocrats deck without some sweet sacrifice outlets. Razaketh, the Foulblooded is very hard for me to keep out of black decks at this point, especially since in Commander there are plenty of ways to get him into play without actually casting him. Say what you will about tutors, but if you’re paying two life plus an expendable creature I don’t think it’s an issue that will be terribly widespread. Butcher of the Horde is a friendly reminder that I don’t have any idea how to evaluate cards for standard(because I bought way too many of them) but is a free instant speed sacrifice outlet to beef himself up too. And of course the king and queen of free sacrifice outlets Viscera Seer and Ashnod’s Altar are probably the most played sacrifice outlets in their respective types and for very good reason. Over 18,000 decks is a lot of decks playing the altar, and I promise that going with the crowd in this instance is an OK thing. Well there we have it! Did I summon the spirit of the Aristocratic society in my Alesha re-roll? Was there something else that I missed along the way? Let me know in the comments if I did. Thanks again!

And by the way…we’re the Aristocrats!