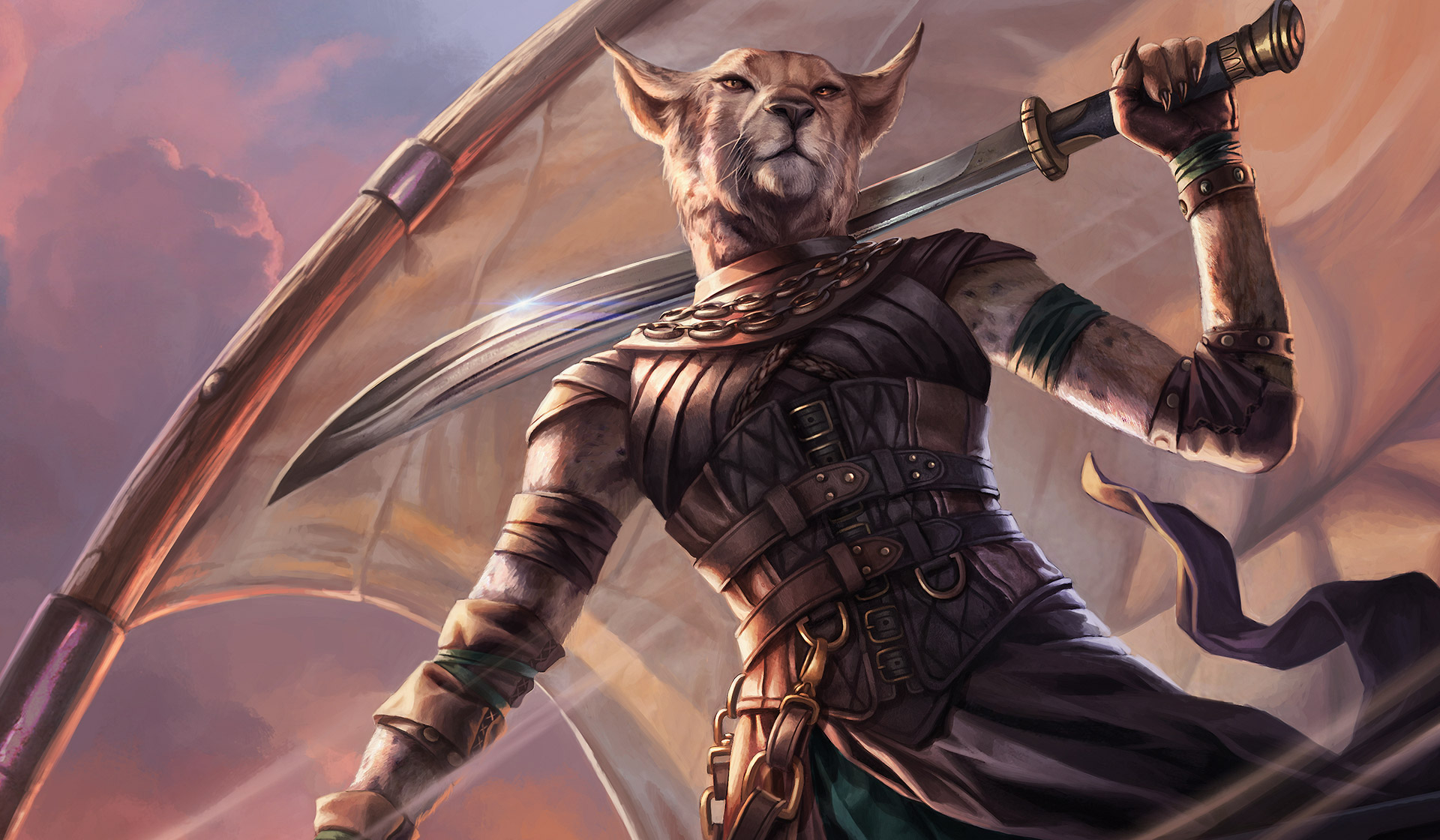 Welcome to the post-Commander 2017 world! It's where every player of every playstyle is stoked to jam with those new toys from WotC. Whether you dress up like a wizard and do Harry Potter cosplay while expressing your inner nerd (which we all are) or you're setting out to bash some skulls and give swirlies to anyone who looks at you funny (not that I haven't seen it happen) there really did feel like there is something for everyone in the new Commander product. Pretty much every day of spoiler season was filled with "holy crap look at this!" moments. And now here we are, on the cusp of having these slick new pieces of cardboard in our grubby hands.

As you all may well know, I LOVE white and green decks. It just calls to me. Casting creature spells and winning through combat, that's what gets me excited. Some people are whacky combo players, and while I do enjoy seeing what people come up with, I like simple elegance. So when I first saw one of the feature cards of the new cat tribal deck you can only imagine my excitement.

Look at this beauty! She makes combat hard for opponents both ways. Mirri, Weatherlight Duelist is like a highway and I'm going to ride this card maybe not all night long, but TOTALLY until I've had my fill for the day. This is what I am all about right on display for all you ladies and gents!

Something to keep in mind when looking at the first wave of Mirri (or any new commander from C17) decks we see that a healthy amount of players decided to retain a decent amount of cat tribal style cards from the deck as it came out of the packaging. Some cards you will see getting played in a high amount of Mirri, Weatherlight Duelist even though they may not seem to be the most powerful cards around. This is something we've seen over and over before with different commanders like Breya, Etherium Shaper or Yidris, Maelstrom Wielder where certain cards are played at a higher percentage than normal in specific commander decks because they came with that given commander in that preconstructed deck. Take a look at their pages and you'll see what I mean. There's more to them than meets the EDHREC eye

So while Mirri, Weatherlight Duelist may not be as cat focused and tribal themed as say Arahbo, Roar of the World for awhile we might see frequent visits from cards like Leonin Arbiter. This isn't a wrong move on anyone's part since this is Commander where you can do just about anything you like, just something to keep in mind for future reference as you're going along thinking "why does it feel like there are a ton of (tribe) creatures in (C17 tribal commander) decks?" The more you know...

This week our inspiration comes from when one of my favorite cards in recent sets was in Standard: Fleecemane Lion. I loved having an aggressive creature to cast turn two and then making it even BETTER on turn five. This was when I was getting back into the game after a long hiatus, but from the first time I slammed a Fleecemane Lion, made it Monstrous and put Unflinching Courage on it I was hooked.

For getting back into Magic the deck was super straightforward and powerful enough to contend with some of the major decks in the format. For many years in Standard you could play some green fatties along with a little bit of removal and utility from white or red and you had yourself a fine deck to play at Friday Night Magic. This is where the "Green/White Little Kid," decks came from. They were cheap and easy to play, thus the little kid aggro decks were born. Swinging for the Fences

One thing that stuck out to me when I first saw Mirri was how it created situations where you're just not going to worry about what stone wall your opponents have out there. Whether it's The Locust God with fifty locust tokens or a horde of Relentless Rats, Mirri is going to find a way around. Mirri excels at Restricting your opponents' options during combat, all we have to do is attack and play a normal game of Magic! With that, we want to play lots of creatures and have the ability to "go wide." Mirri doesn't naturally lend herself to being a token deck, since her abilities don't interact much with them beyond making them hard to stop from hitting your opponents. She isn't a Rhys the Redeemed type commander, but I'm certainly down to make her fun regardless.

Since Mirri's first ability doesn't trigger unless we actually attack with her, we need to find ways to make sure she can survive that attack. At three mana she is a cheap commander, but after a couple commander taxations she's not going to stay cheap forever. Reconnaissance might be one of the easiest ways to pull Mirri back from the fray or any other attackers in case an unfavorable block does happen to come along. Godsend is played at a high rate in Mirri decks already, so that sample size is sure to go up quickly. Only allowing one blocker and then blowing up that blocker seems like a pretty easy way to make sure Mirri isn't getting cut down for the sake of crashing everyone else through. Grade A combat tricks EVERYONE can see coming

The Only Wall You'd Really Want

Now, say you don't have a way to protect Mirri and there really isn't a viable attack you'd want to make for the sake of attacking. Mirri still has a second ability though that protects us from hordes of nasties crashing through, and we want that second ability to ensure only one creature can attack us per turn. That means we need to have a few ways to tap Mirri without actually attacking. In playing around with the deck online, Glare of Subdual has been an absolutely house in the deck. It let's our creatures turn into repeatable Fog effects on their creatures or if we need to even tap down their Static Orb so we can do stuff. Nobody probably plays Static Orb though, but if they do they definitely deserve to be the first to go down...they knew what they were signing up for.

ANYWAYS. Tapping Mirri, right. Along the lines of Glare of Subdual we can get some awesome ramp from Cryptolith Rite, one of my favorite cards in the past few new sets. If you're playing creatures this is awesome since it makes every creature a Birds of Paradise and we all know how common Birds of Paradise is in this format. Yep, it's only in dang near every green deck ever. To partner off of Cryptolith Rite, a newer card out there is one that I think will help the traditional problem that green/white decks have in multiplayer games is keeping up with multiple opponents. Throne of the God-Pharaoh fixes that problem in a pinch since it rewards us for tapping our creatures as well. Sick synergy indeed people! Get these now and be a cool kid early

Some Catnip for the Road

Let's wrap this up now, my heart can only handle so much excitement before the deck is built in paper. How is everyone else planning on building Mirri, Weatherlight Duelist? Should I have kept the tribal cat feel to it or strayed further away? Let me know what you all think I'm forgetting in the comments. I'm off to wait patiently by my mail box for a few days and rip this open once it arrives.