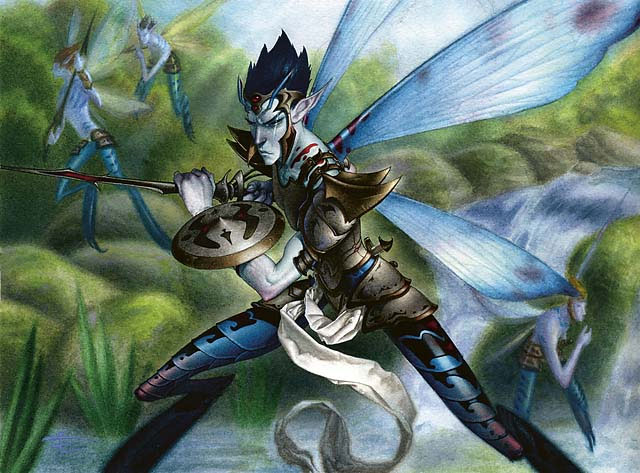 Howdy all my friends and fellow spell slingers! I hope your weekend wasn't bogged down with too many Tree of Redemptions! Masters 25 is out and reprints are everywhere! I know the community at large is a bit sour on the set, but being able to get Eladamri's Call on the cheap again is something this guy won't ever argue with. The draft format seems fun and who doesn't love playing the lottery?

As I have often said, I am a man of the people. So, when you folks request a deck I kinda owe it to you all to respond! This week's translation comes via request from reader Nathan Ball. He reminded me of a tribal deck that is getting played a bit in the Modern format right now, but really took it's place of dominance in some old school Standard way back.

Check out this deck that spent quite some time tearing up the Standard format of it's day. We're talking unheard of dominance at that time.

Just...whatever. Us old fogies who played Standard back when Thoughtseize into Pack Rat was a thing are having old fogie flashbacks seeing discard into an aggressive 2-mana spell you just can't beat. That's what this UB faeries of old was like. Whether is was casting 1-drop into 2-drop into 3-drop and just embarrassing anything you tried to do or it was killing and countering everything you tapped mana for, this deck was a house. Everything was evasive and hard to kill. Even if you started to kill one it was just replaced by another.

Luckily for us, Faeries is one of the most synergistic tribes available according to our handy dandy Tribal page on this here site! What the tribe doesn't have in lord effects or big fat beaters it makes up for in policing any and all fun from happening at the table.

So one problem we have here is a distinct lack of legendary faeries. The options are so limited that the most played faerie legend is a 6-mana creature that doesn't even have an Eminence ability. Talk about a pile of yuck. This could explain why so few faerie tribal decks seem to get built; there aren't many options if you're looking to stay on theme. Oona, Queen of the Fae owns a "commanding," lead in terms of most popular faerie commander at an entire 182 decks currently. Yea. Watch out for that. Of all the nerds out there there are only 182 of them speak for the majority of faerie players. That doesn't mean we don't have some solid information available to us though!

In case you need a quick refresher on what this "synergy" thing is, synergy scores are calculated based off how unique a card is through your current filters compared to all other eligible decks the card could be in. For example, we see that Scion of Oona is in 94% of faerie decks with a +94% synergy score. This spread of 0% essentially tells us that the card doesn't get much play in many non-faerie decks. Likewise, if the card were played in 94% of 222 decks and was only a +20% synergy then we know that 74% of all blue decks are playing that given card. Basically, the higher the synergy score, the more specialized to the current commander or theme the card is. The lower the synergy score means that the card might be UNDER played compared to the average deck it would be eligible in.

Does that make any sense to you? No? Yeah, me neither. Basically we know that according to this list of cards, decks with tribal specific effects like Lord of Atlantis or in our case Scion of Oona are going to have very little overlap with your typical brew. You're welcome for the reminder on how all this works. *Psst, this is where you say "Thanks Matt! I forgot about all this, you're the greatest! I hope they NEVER fire you!"*

Since we can't pick Tinker Bell to lead our merry mites we still need to find someone who can. We already mentioned that Oona, Queen of the Fae is the most popular pixie pick. If we wanted to go wide that would certainly be a great choice, since she also makes for a great mill commander if trying to burn the table for 99-life instead of just 40 is your thing. Vendilion Clique is a staple of the 60-card competitive blue decks, but losing access to an extra color and playing a creature-themed deck feels really bad. There's actually a 4th option for legendary faeries that we haven't seen yet, but it's not one that fits the bill either on theme or colors. Bet you can't guess what it is.

Did you cheat? I know you cheated. Whatever, cheater, you didn't know that Rubinia Soulsinger was a faerie, shut up. Your pants are on so much fire that the youths would say it's hip. Or just on fire. Yes, you're lying and now your pants are frying. Just because of your deceit we're not playing Rubinia.

We have to pick a the last remaining legendary faerie now. The one who is damn near impossible to kill with sorcery speed or instant speed removal. Wydwen, the Biting Gale fits our bill as a blue & black control deck finisher as hard to kill, evasive, and on theme with the faerie motif. Perfect for those of you who miss the days of ruining friendships and mirror matches for daaaaaaaaaaaaaaaaaaaaaaaaaaaaaaaayyyyyyysssssss.

No, this isn't where I tell you to get that wicked sweet lower back tattoo that has nothing to do with your actual heritage. Nor am I going to advocate covering half your upper body with some sort of Samoan/Viking hybrid...thing that you got when you were 19 and now you're 20 and already realize the error of your misspent youth. But whatever bro, you do you. This is where I think it's worth revisiting some of those tribal staples that people throw into decks but sometimes forget to mention how solid they are in any tribal deck regardless of what species you're promoting. 2017 was a WONDERFUL year for tribal decks and it's easy to let some of the under-appreciated cards slip through.

If you look a few different tribal pages on EDHREC and scroll down to the artifact section, you'll find a stack of great cards that can fit into nearly any tribal deck. Herald's Horn is a great way to build value and sneak in some extra draws throughout the game along with a relevant mana discount. This is basically your artifact twist on a card I've long been a huge fan of for tribal decks: Call to the Kindred. Some people aren't keen on how fragile an aura can be, especially in a deck like faeries where you may be bouncing and replaying creatures over and over, but trading in a mana discount for straight cheating creatures into play is big game for the little faerie folk. I know there are more than 1,600 blue decks playing tribal themes, but that's how many are playing Call to the Kindred and I can't help but think that number should be higher after this past year. Plus you can pick these up for $.39 at Card Kingdom right now...just so you know. For tribal deck that likes to go wide there is another card I think folks could use a reminder on: Stoneforge Masterwork. This gets suited up in over 3,200 decks out there so you know people have heard of it, but in a world where tribes make multiple creatures who can flood the board, this can make one of those creatures stand out among the rest, plus it's mana investment is next to nothing. Being under a buck will make the budget brewers happy too, so slap this on one of your evasive dudes and finish the game quickly here!

There we have a sweet counter control brew, some removal, lots of card draw and evasive critters. We even are able to build in a little voltron "beat face with my commander," subtheme going on since Wydwen, the Biting Gale is so hard to kill and can go back to your hand at instant speed. We even have Nectar Faerie to offset all the lifeloss! Strong idea, Matthew. Strong.

And there we go, a tribal deck for those of you who like making your opponents hate 1/1's! What do you think? Maybe that I need to quit making tribal decks all the time? Well, you keep reading so I'll keep writing them. Give me some other decks and maybe I'll take a swing at your brews! Thanks everyone and I'll see you next time!