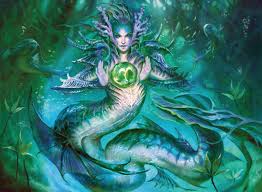 Welcome to Andrew Jackson Highlander, a weekly series where I share an EDH deck tech that costs twenty dollars. In this article, your opponents are going to need a bigger boat, because the monsters are rising from the depths. This week, I am bringing you a Tatyova, Benthic Druid deck with a very singular theme: Simic Sea Monsters. I am really excited about this deck. It's fun to play, interactive but still easy to pilot, and surprisingly strong at most casual to casual-competitive tables. This would be a deck I would recommend to anyone who wants to try out EDH and has any level of experience with Magic: The Gathering as a whole. Plus, it's very easy to upgrade without spending too much money, because the "more expensive" sea monsters aren't that expensive and the rest of the upgrades you'd want are just good ramp/draw/efficient interaction that any other Commander deck with these colors would want.

This deck is bread and butter Simic. Ramp, draw, protect yourself with good interaction, and then drop and protect some game-ending fatties. Rampant Growth and Cultivate get the mana flowing, Concentrate and Harmonize keep you stocked, Beast Within and Void Shatter help keep the board under control, Aetherize and Fog protect you when it isn't, and Inkwell Leviathan and Simic Sky Swallower finish the game. Tatyova is a perfect pick to helm this deck because the lifegain and draw play right into what this deck wants to do.

This is a really easy style to wrap your head around. Ramp early, refill with draw spells, and then protect yourself until you can start dropping Sea Monsters and protect them.

To keep the budget down, the draw is sorcery speed. It is totally fine to tap out midgame or leave just enough mana for a fog up (just in case, this is Commander after all) to just draw some cards, even if you have good instant speed interaction in hand. Also, you don't want to burn your fogs or other interaction early, Tatyova's lifegain can actually do a decent job of pulling us back to safe levels of HP.

Once we're into the middle and late game, it's about getting a Sea Monster or two down and protecting them. I really don't like to use counterspells early, I'd rather answer threats on the board and use all of our countermagic to protect our creatures. And it's a good idea to hold our fogs for the late game, so we don't have to hold our Monsters up as blockers. Inkwell Leviathan / Simic Sky Swallower- These are the finishers of choice because they have great evasion and do a great job of protecting themselves. Reason // Believe- This card is really cool in this deck. You'll usually cast both halves in the same turn to try and cheat out a big fatty. Still ok value even if you can't, but it Is really fun to flip a Sea Monster midgame. [card]Unexpected Results/card]- Speaking of fun ways to cheat a fatty into play early… this is such a fun, spirit of the format type card. Hopefully we don't hit a fog or counterspell, but this card is too fun not to play in a Simic deck. Aetherize / Aetherspouts- Super fogs! Just wanted to point these cards out because they are fantastic cards. Awesome budget cards that protect us and, honestly, I'd have to look really hard for a reason to not run these in any non-cEDH blue based deck. Dissipate / Void Shatter- Along the same lines, these are among my favorite counterspells in the format (along with Faerie Trickery. Not efficient, sure, but the exile is HUGE. Stormtide Leviathan- This is my favorite Sea Monster in the deck and probably the best. It has a great body, evasion, and turns off a lot of attacks from our opponents. Breaching Leviathan / Lorthos, the Tidemaker / Scourge of Fleets / Slinn Voda, the Rising Deep- These all come with game changing abilities on them. But timing when to play them isn't as important as it seems, they have huge bodies so slam them when you can and any extra value you get is gravy. Nezahal, Primal Tide- Grown up Mystic Remora would be really good in this deck. Great body, draws cards, protects itself. Not expensive now and can probably pick it up for 50 cents or less if you wait until it rotates out of Standard. Crush of Tentacles- This was the last cut in the deck to get it just under $20. Fine card even without the surge, really good and super on theme with the surge. Stormsurge Kraken- 5/5 Hexproof for 5 is fine. 7/7 hexproof that draws cards when it blocks for 5 is really good. Simic EDH Staples- This deck really has a great base so after adding a few more Sea Monsters, you can focusing on getting your staples: Cyclonic Rift, Sylvan Library, Rhystic Study, etc. Lands- It is ALWAYS worth upgrading the lands in a budget list. Fetch lands, like Misty Rainforest, in particular are really good with Tatyova. Aggro- While the fog effects and removal should be able to keep you in a game, there are no early blockers in this deck. If you get focused by multiple opponents early, you probably will struggle. Knowing that you have fog effects can deter a lot of attacks on its own and playing politics will be your friend if you're in an aggro meta.

Control- Wait… what? I thought aggro was the problem? It is, but playing against multiple hard control opponents can be tough too. We really on a few big threats to end the game, so we have to make sure they hit the board and stick and wading through a ton of counters and removal can make this extremely hard. If this is the case, it makes sense to switch in more low cmc counterspells (usually can cut fog effects in a control meta) to help protect your Sea Monsters.

I have been really impressed with this deck (and to be honest, am quite proud of it). It feels very "spirit of the format to me." It ramps, it draws cards, it has good cheap interaction without being oppressive, and it relies on big ol' Sea Monsters to close a game out. Once again, I really recommend this as a way to introduce people to the format. But it is also refreshing to pilot a deck like this. One that is surprisingly fun and will cause your opponents to close down their beaches and head inland.