Hello, and welcome back to Archetune-Up, an article series devoted to tweaking a deck with the help of the EDHREC Theme pages!

This week I'm continuing the month of spoopy decks with a color combination a bit outside of my wheelhouse.

When planning out the decks for the month, this week was originally going to be an Atraxa, Praetor's Voice Horror Tribal deck, but I wasn't pleased with the way the list turned out, so, naturally, I scrapped it entirely and started from the ground up. I still wanted a deck that dealt with counters in some way, but what commander could helm a spooky counters deck?

-1/-1 counters seemed obvious if I wanted to fully commit to some form of counters, but -1/-1 counters felt more mean-spirited than spooky, and I had other plans for them in an upcoming article. Just for the heck of it, I decided to scroll through the Theme tab to check out the +1/+1 Counters Theme to see if there was something salvageable in there. And what do I find next to it? 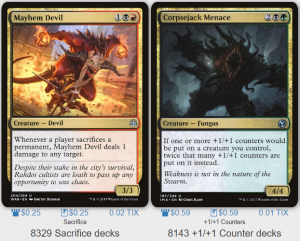 The Sacrifice Theme! Blood rituals and sacrificial offerings are a spooky trope in movies and media like Midsommar and Cabin in the Woods, so I couldn't help but peek in and see what this theme had to offer! Luckily for me, it had the perfect commander that straddled the line between sacrificing and counter payoffs:

Mazirek is a commander that I've liked for quite some time, especially since I've always found myself enjoying Golgari more when it isn't pigeonholed into the same old graveyard shenanigans. Our Insect Shaman dodges this trope adeptly, merging black's love of death with green's ability to grow stronger from it in a morbid balance of life blossoming from death.

That just raises the question: who is being placed on our grisly altar, and what will we gain from it? Let's pull open the Sacrifice Theme open and see what dark secrets rest inside.

Please, Take a Seat... It Will All be Over Soon

There are a lot of moving parts in the average Mazirek deck. You need to have creatures to sacrifice, ways to sacrifice them, creatures on board to receive +1/+1 counters, and +1/+1 counter synergies. This sounds like a lot to juggle, but all of these things are abilities that Golgari is quite versed in, so finding cards that can function on all of these axes isn't terribly hard!

A lot of the +1/+1 synergies in the deck are covered with cards like Hardened Scales, Winding Constrictor, and Corpsejack Menace, so I decided to focus my efforts on adding some more expendable creatures to the deck.

Reclamation Sage and Wood Elves are exactly the kind of creatures that this build wants. They're small, cheap, come with desirable ETBs, and are great sacrifice fodder later. I can't see a world where I wouldn't include these dorky creatures.

Demon's Disciple is the latest Fleshbag Marauder-like creature that's been printed, and since the deck already has three of the other four variants (no love for Slum Reaper 😢), Disciple seemed like a perfect fit. All of these cards have the potential to provide our team with four +1/+1 counters when Mazirek is out, and they help make our other sacrifice effects more potent. Your opponents will only have a finite number of "bad" creatures to feed to our edict effects, so the more we put in, the better!

As Likely to Hurt as to Heal

Not every creature's purpose here is to be put under the knife, though. Some are there to facilitate our strategy and will want to be on the battlefield more often than in our 'yard.

Sylvan Safekeeper is a cheap and efficient way to protect our creatures while also doubling as a way to pump them up considerably if we're looking to alpha strike an opponent when Mazirek is out. While they aren't in the deck, Ramunap Excavator and Crucible of Worlds are potential inclusions if you have a more expensive manabase with fetch lands as well. Cards like Wave of Vitriol or Squandered Resources also synergize incredibly well with Safekeeper and allow for a secondary style of build where you sacrifice your lands to boost your creatures as opposed to this build where they cannibalize one another.

The final creature, Yawgmoth, Thran Physician is everything this deck could ever want in one package. He gives us the ability to sacrifice our creatures, cripple opposing ones, and draw cards for the mere cost of one life. For two black and having to discard a card, he also Proliferates, swelling our board while further diminishing the strength of our opponents' crippled creatures. Yawgmoth is on his A-Game here, and he's perfect for this strategy.

Death is No Excuse to Stop Working

This deck only has a finite number of creatures, though, which meant that I either had to commit to going wide with tokens or finding a few ways to recur our creatures from the 'yard, and I decided to opt for the latter.

Phyrexian Reclamation is an underappreciated black uncommon. Yes, it already sees play in over 12,000 deck, but I think that number should still be even higher. Two mana and two life for a repeatable Raise Dead is a price I will pay every time. Recurring a Blood Artist or Zulaport Cutthroat with it will quickly restore our life, while constantly bringing back Fleshbag Marauder and friends will keep the board under control. Then, when you begin to buy back haymakers like Avenger of Zendikar and Iridescent Hornbeetle, the game will quickly swing in your favor. Don't underestimate this fantastic little card!

As I discussed in my Black Review for Zendikar Rising, Agadeem's Awakening is my ideal design for a Modal DFC. One side is a land that will be useful early to mid game, while the other side is big and splashy, which is perfect for late game. We have numerous creatures that are smattered between one and three CMC, meaning that if we were to spend a simple six mana, we can get back groups of synergistic creatures like Viscera Seer, Winding Constrictor, and Springbloom Druid! If we have the mana to dump into it, we can bring back even bigger creatures like Corpsejack Menace and Tendershoot Dryad too! We can even buy Agadeem's Awakening back with Eternal Witness if we decide to reanimate it as our three-drop! Awakening has flexibility like no other card in this list.

Finally, one of the original mass reanimation spells, Living Death, makes its way into the deck!

I cannot explain how powerful this card is when it's included in a strategy like this. This deck can manipulate its board to such a fine degree, thanks to creatures like Viscera Seer and Woe Strider, that you are sure to bring back whatever creatures you want each time you cast Living Death. Not only that, but thanks to cards like Demon's Disciple, Butcher of Malakir, or Archfiend of Depravity, our opponents' boards will come out of a Living Death in tatters no matter how strong it initially looked post-reanimation. Living Death upheaves the board and can set you up for a win, similar to Cyclonic Rift, so don't be afraid to pull the trigger when the time comes to win.

'Tis But a Flesh Wound!

We've gone through the expendables, the engines, and the recursion, what else does this deck need?

Well, a way to win and a way to take advantage of all of our death would be nice!

Eldrazi Monument pumps the team, gives flying, and grants indestructible, while also being a sacrifice outlet. A better and more budget-friendly Akroma's Memorial? Sign me up! One of the build's issues is getting damage through token decks or other strategies that have nigh-infinite number of creatures to throw to our sacrifice effects. By putting our team in the sky and making them resistant to removal, we can consistently crash into our opponents and wear them down until they are forced to succumb to our growing swarm.

Death is a constant on our side of the field, so why not capitalize on it? Liliana, Dreadhorde General does just that, drawing us a card whenever a creature of ours dies. This includes tokens, too! On top of her fantastic static ability, she also makes a 2/2 Zombie, casts Barter in Blood, and can completely decimate the board if you are able to get to her last ability. She is right at home here, and she contends with Yawgmoth, Thran Physician as the most synergistic card in the deck.

Rising from the Grave

There is one more card that I added to the deck, but it wasn't from the Sacrifice Theme, instead it was from Zendikar Rising.

In this deck, Roiling Regrowth is a second copy of Harrow, giving us two ramp spells that also provide our entire team with counters when Mazirek is out. Roiling Regrowth isn't the only card from Zendikar Rising in the deck, though. Iridescent Hornbeetle, Scute Swarm, and Soul Shatter are already included in the average Mazirek deck even though the set has only been out for a few weeks.

There are plenty of other cards from the set that are great inclusions for this deck, too. Modal DFCs like Malakir Rebirth, Khalni Ambush, or Bala Ged Recovery are great all around cards for Mazirek. This set also has more +1/+1 counter synergies, like Oblivion's Hunger, Skyclave Shadowcat, Grakmaw, Skyclave Ravager, Gnarlid Colony, Oran-Rief Ooze, and Swarm Shambler, to pad out the list, fleshing out Golgari's space as a purveyor of +1/+1 counters.

What are your thoughts on this intersection of themes? Do you find enjoyment from tearing apart your own board of creatures to bolster the rest of your forces, or do you prefer to endlessly recycle each of them between the battlefield and the graveyard, a la Meren of Clan Nel Toth style? Also, to all of you Mazirek player out there, how has Zendikar Rising shaped your existing decks? It seems like this set has added a lot of tools to Mazirek's kit, so I'd love to hear your thoughts. Make sure to let me know down in the comments below!

As always, if you’d like to reach me, I’m active on Twitter (@thejesguy), where you can always hit me up for Magic- or Jeskai-related shenanigans 24/7. Do you have any comments, questions, or concerns? Please don’t hesitate to leave them below or get in touch! Stay safe, wear your mask, go vote, and keep fighting the good fight. I support you. No justice, no peace.