Archetune-Up - As Thirsty as a Rose

"Bloodthirsty" is Such a Crude Term...

Hello, and welcome back to Archetune-Up, an article series devoted to tweaking a deck with the help of the EDHREC Theme Pages! This week, I continue "Monster Month" with the second most popular tribe from Innistrad: Vampires!

We started off pretty straightforward last week with a Dimir Zombie Tokens list, but this week is going to be a bit different. See, in Midnight Hunt, there weren't any real Vampire Tribal commanders. Florian, Voldaren Scion wasn't going to cut it at the helm, so I figured I should go with an older commander instead. I certainly wasn't going to rehash an Edgar Markov list since that is well-trod ground. I also didn't want to write about a mono-black commander, like Anowon, the Ruin Sage, because I didn't want to cut out an entire color from this tribe's Innistrad identity. Wanting to keep red and black as part of the deck's color identity also excluded all Orzhov commanders, like Elenda, the Dusk Rose and Vish Kal, Blood Arbiter, by proxy as well... so what's left?

Honestly? Not a whole lot.

But then, just as I was about to give in and resign myself to a generic Olivia Voldaren Vampires list, I saw her. A beautiful rose who stuck out from the rest:

Our future Queen (long may she reign) may only have 33 dedicated Vampire Tribal decks to her name, but the fact that she had any at all piqued my interest!

Marchesa and Vampires both do something that makes them a perfect fit for one another: they both care about +1/+1 Counters! Many of the Vampires in Magic's history acquire +1/+1 counters through some means, whether it's damaging opponents, killing creatures, gaining life - if you can think it, Vampires can gain counters from it!

This works perfectly with Marchesa's ability to recur creatures if they have +1/+1 counters on them, which she can also facilitate thanks to her Dethrone trigger!

That said, while there is a lot of inherent synergy here, there are still some issues with the deck. As usual, the lands are too low; 33 lands is just too few. There's also a lack of interaction, and the list can use a bit more card draw as well, especially since we plan on dumping our creatures onto the board with impunity.

So without wasting any more time, let's sate our famished palette, and dig in, shall we? Please, guests first.

Why Work on an Empty Stomach?

As this is a deck deeply intertwined with +1/+1 counters, my first thought was to use the +1/+1 Counter Theme Page and see if there were any Rakdos or Grixis pages that I could utilize to find good upgrades. Alas, while Vampires may use this theme a lot, there weren't any specific pages for those colors... 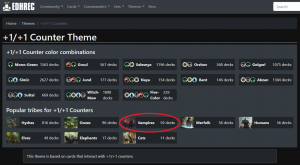 This is a neat little page that can pop up from time to time depending on how strongly intertwined certain tribes and strategies are, like we see above!

While the +1/+1 Counter Vampire Page, is a bit wordy to say, it's perfect for what we need. Sure, there are a smattering of white cards across it, but we can ignore those as we look for cards in Marchesa's color identity.

Now that we know where we're pulling our cards from, let's see which ones will make the cut!

The deck's creature curve was a bit top-heavy, so I cut a handful of the "win more" Vamps and went a bit more low to the ground. Marchesa is at her best when she's able to Reanimate a board full of creatures, and the best way to do that is to make sure our creatures are easy to cast! On top of this, Marchesa herself is a way to put counters on our creatures, and she's right there in the command zone every game, so big creatures like Necropolis Regent, or redundant enchantments like Stensia Masquerade, are unnecessary and cumbersome.

Conversely, Sanctum Seeker and Nighthawk Scavenger are solid threats that can come down early, accrue counters, and incidentally gain us life over numerous turns. We are going to be the aggressor in most situations, so padding out our life total is imperative to try and outrace and outpace opponents. Florian, Voldaren Scion can capitalize on this aggression by giving us plenty of card selection the more blood we drain from our opponents.

Finally, Bloodline Necromancer is a fantastic addition, since it not only has lifelink, but it will always bring another Vampire back from the grave when it enters! This gives the deck even more resiliency, and only gets better if you can put a counter on it!

The First Bite is Always the Juiciest

On top of the creatures, tribal decks also need removal and card draw. While this deck has a bit of each already, I think there are a couple additions that slot in well here.

Urge to Feed is a super neat instant that can pivot between a removal spell that picks off annoying creatures like Oracle of Mul Daya or Storm Kiln Artist, and a protection spell that can give all of our Vampires a +1/+1 counter to save them from removal as long as Marchesa is out! I love flexibility, especially when spells have two great "modes" like this one.

The second removal spell I added in was Last One Standing. There are plenty of great board wipes in black, but they're split between being $20+ (like Damnation) or what feels like 20+ mana (such as In Garruk's Wake). Last One Standing is a mere three mana, a mere $3, and is great for this list. Any board wipe is awesome for us, even if it has the potential downside of leaving a single creature alive on one of our opponent's boards. That single creature won't mean much when we get our entire board back post-Wrath. Not only that, but sometimes our creature will be the one lucky enough to live! A sweeper that's easy on the mana and easy on the wallet is difficult to find, but always a great addition when we can!

Coming back for a second week in a row is Kindred Discovery. This card is pricey, but is a staple in any tribal deck that includes blue. The sheer volume of cards that this enchantment accrues is mind-boggling, especially in an aggressive tribal list like this one. Similarly, Painful Truths is great here. Three cards for three mana and three life is a great rate, and with all the lifelink and incidental lifegain in the deck, it would almost be irresponsible of us not to have some way to spend life, no?

These cards join Bident of Thassa, Village Rites, Read the Bones, and a handful of other card advantage spells already in the deck to help round out our card advantage suite. Having a varied suite of ways to draw cards is great, since it allows the deck to eke out advantage from multiple different angles and prevents us from getting too predictable. On top of that, while we want to be aggressive with cards like Bident of Thassa, Reconnaissance Mission, and Kindred Discovery, there's a very real chance that we may end up falling behind in some games, and that's when raw card advantage from spells like Painful Truths and its ilk will be integral.

Before I go, there are two more cards I added, but they have a bit of a caveat:

Zendikar Rising MDFCs. Yep. I talk about them every article because I really do believe in them. I think Malakir Rebirth is perfect for protecting Marchesa when we can't put a +1/+1 counter on her, and Agadeem's Awakening is fantastic for recovering from a board wipe or two if we get too far behind.

That said, I believe I've mentioned and/or included MDFCs in every article I've written ever since their printing, so I wanted to provide the potential options of Negate and Haunting Voyage in lieu of the MDFCs in case you're tired of seeing them. Negate can deal with any stray removal spell that can come our commander's way, and while Haunting Voyage isn't a recommendation from the theme page we're working off of, it's a great reanimation spell for any tribal deck to utilize, it's and super cheap right now, too!

With that out of the way, I think that should do it! A tasty and tantalizing +1/+1 Counter Vampire deck!

This deck was quite fun to put together. Oftentimes, trying to build in subthemes to a tribal deck can feel arduous, or even like it's taking too much away from the creatures that you're trying to synergize with, but I didn't feel that at all with this deck. Vampires and +1/+1 are so closely tied together that I'm shocked that there aren't more decks like this out there! Maybe there'll be some more new toys for this style of deck when Crimson Vow releases, so keep your eyes peeled!

What about you, though? Do you like Marchesa as a Vampire commander, or do you think she is simply better as a regular +1/+1 counter commander? Do you often find it difficult to build a tribal deck that also has a subtheme? Who is your favorite Vampire commander? Make sure to let me know down below!