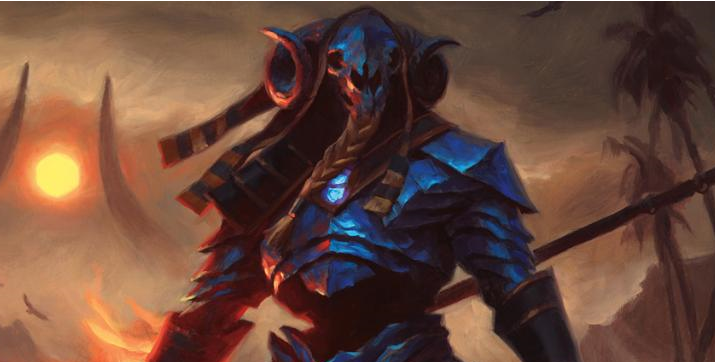 The Biggest Fire(ball) the North Has Ever Seen!

Hello readers! Welcome to Archetune-Up, an article series dedicated to diving into the plethora of themes on EDHREC and coming away with a strong, cohesive deck!

In each article I will break down a reader-submitted deck and give it a good ol’ tune-up with the help of the theme pages on EDHREC! The themes on EDHREC are one of the most useful tools on the site, and will help us create a tight, more focused deck!

Without wasting any more time, let’s jump into a Neheb, the Eternal deck, submitted by Rodrigo (@XpPotions)!

Neheb has made a name for himself as one of the few commanders that can help facilitate a Burn strategy in EDH. His ability rewards you for what you already want to do: end the game! I've had many games against Neheb where I'm comfy at 40 life, only to immediately lose next turn in a torrent of fire. This is exactly the strategy Rodrigo planned on doing with his Neheb list:

When he sent me the deck, Rodrigo mentioned that he was having difficulty balancing the setup cards against the payoff cards, so let's dive into that first!

If You Want to Burn it, You Have to Earn it!

Judging by the Rodrigo’s inclusions, the goal is to win through damage in some way. The issue is though, there are too many payoff cards, which causes the deck to feel clunky. Drawing and deploying our pieces in the right order is extremely important to any deck that relies on its commander as its linchpin. To address this issue, I dedicated the first twenty slots of the deck to card draw and ramp.

Faithless Looting, Wild Guess, Tormenting Voice, Cathartic Reunion, and Light up the Stage were auto-includes since they help us dig deep into our deck or filter our hand. Bigger spells like Commune With Lava and Knollspine Dragon will help refill our hand late in the game. Khorvath’s Fury synergizes well with Neheb, since it deals damage to our opponents while also refreshing our hand.

The last three cards in our draw package are Chandra, Torch of Defiance, Endless Atlas, and Loreseeker’s Stone. These give us card advantage each turn as opposed to the one-shot effects above. Having a varied suite of draw spells is important, since it allows you to shift from early-game to mid- or late-game more smoothly, ensuring you do not stumble and fall behind.

Star Compass, Prismatic Lens, Fire Diamond, and Mind Stone were my first additions, since I value two-mana ramp quite highly. Cryptolith Fragment is tailor-made for a Neheb deck, giving you one mana when you tap it and then three mana post-combat if Neheb is out. Worn Powerstone, Hedron Archive, and Thran Dynamo produce multiple mana and are are fairly efficient, which is why they round out our ramp package.

While we do run Mana Geyser, Ruby Medallion, Doubling Cube, and Primal Amulet, it’s important to not count them as ramp. These cards are narrow or one-shot effects, and they are not a good foundation for us to build this deck upon. They are important includes, but I see them as set-up cards, not ramp.

It is easy to put big, flashy cards into Neheb, which is why I wanted to figure these slots out first. If we start building our deck with these cards in mind, it will prevent us from going overboard on payoffs.

When I think of Neheb, I think Big Mana, and judging by Rodrigo's deck title, he thought the same. Interestingly enough, Neheb is not listed among the commanders in this theme. The Big Mana theme only looks at commanders who can cheat mana costs or reduce them, and Neheb doesn't do either. Instead, he can make you a copious amount of mana for little effort!

So, if Neheb isn't listed in the Big Mana theme, why are we looking here? Well, seven of eight listed commanders in the Big Mana theme have red in their color identity (such as Jodah, Archmage Eternal or Maelstrom Wanderer), meaning we might be able to snag a few interesting top end pieces for our deck!

Wildfire Eternal was the first card to catch my eye. It can cast 21 of our 27 instants and sorceries if it is not blocked, and worse case, if it is, we will get four mana from Neheb! Having four toughness is also important for dodging the three damage board wipes we could include.

I've always wanted to find a home for Apex of Power. Not only will Apex refund itself, but it will essentially draw you seven cards. Getting ten mana shouldn’t be difficult, and it is definitely worth it since we will dig through nearly one-tenth of our deck! The more cards we can see during the game, the more chances we can piece our synergies together.

Following in the heels of Apex, Emrakul, the Promised End is a pet card of mine. I love Eldrazi, and I will use any excuse I can find to add them into a deck. Luckily, Rodrigo was already playing a Kozilek, Butcher of Truth and Ulamog, the Infinite Gyre, so Emrakul is a logical next step. Thanks to our card filtering with Faithless Looting and friends, we can always discard Emmy if necessary, making the Eldrazi Titans a safer include here than other decks.

Remember when I mentioned that we were running twenty-seven instants and sorceries? That was thanks to the Spellslinger theme page. This theme has a lot we can add to our deck. Fork variants, damage-based board wipes, splashy spells, Fireballs - you name it, this theme has it! Yet again though, Neheb is not included on this theme page. Why is that?

Taking a quick peek at the average Mizzix of the Izmagnus, Shu Yun, the Silent Tempest, and Wort, the Raidmother decks, each of them have forty-six, forty-one, and fifty-two instants and sorceries, respectively. So, it seems that to be classified as a Spellslinger deck on EDHREC, you have to include around forty of these spells. Neheb may not qualify on that front, but we can definitely steal some ideas from this theme.

I ended up adding only five cards from this page that Rodrigo didn't already include. Neheb can be built in hundreds of different ways with different payoffs from this theme, so don't be afraid to sink your teeth in deeper than I did!

Two important cards for a Spellslinger deck are Electrostatic Field and Primal Amulet. Field does a good Guttersnipe impression, providing us with damage and mana when we cast spells. Unlike Guttersnipe, it can also survive some of our damage-based board wipes too! Meanwhile, Amulet reduces the cost of twenty-seven of our spells and will eventually double them late-game once it flips into Primal Wellspring, making it an easy include.

Bonus Round is an incredibly powerful Fork. Bonus Round, combined with Flame Rift or Sulfurous Blast, will deal ridiculous amounts of damage while giving you that much mana later. Keep in mind that your opponents can take advantage of this too, so be careful! At worst, Bonus Round will double your Tormenting Voice variants, letting you draw four cards while only having to discard one. This trick also works with Primal Wellspring and Pyromancer's Goggles!

The last two cards are Jaya Ballard and Jaya’s Immolating Inferno. While Jaya has caught flack for not being terribly strong, this is the kind of deck she was made for. She ramps your instants/sorceries, filters your hand, and has Past in Flames as a final ability. She fits perfectly here. Jaya’s Immolating Inferno is one of the best Fireball variants in Commander. As long as you have a legendary creature or planeswalker on board (we have 9 included), you can hit each opponent for an incredible amount and close out the game.

What Kind of Slug Thrives on Salt? A Group Slug!

Group Slug is Neheb’s most popular build style. He is ranked as the number one commander of this theme. The cards here are the meat and potatoes of a Neheb deck. There is a lot of room here to play around, so you can easily make a deck that fits your style.

Smoke is an odd red enchantment that only allows one creature to untap each turn. This card can deter attacks since most players won’t want their board tapped out. This also allows Neheb and friends to be aggressive and swing into smaller board states without worrying about multi blocking, providing double duty.

Insult // Injury and Quest for Pure Flame are the only two damage doublers to make it into the deck. Insult is a sorcery that we can cast whenever we decide we can end a game. Quest is only a single mana, and when paired with cards like Flame Rift and Breath of Darigaaz, it is almost always online. Neheb has a tendency to be targeted early, and anything that will help our opponents knock us out of the game is a no-go. Enchantments like Furnace of Rath are more harmful than helpful to us since our opponents can use them to punish us.

The last three cards are grouped together because they all do something very important: they hit all players/opponents. Acidic Soil and Price of Progress will punish greedy mana bases and green decks that ramp their lands too quickly. These can easily deal about 10 damage per player without issue. Hazoret, the Fervent provides us with a single crucial role: the ability to pitch useless cards and turn them into damage. Converting lands and mana rocks into late-game damage is incredibly powerful in this deck, and it's something no other card can do so efficiently.

Just a Pinch of Cayenne

We’re nearing the end, so to keep things short, here is a lightning round of spicy cards that were either additional adds or important holdovers from the original list.

Better to Burn Out Than to Fade Away

This deck has been a blast to put together. There are plenty of build paths for you to take whether you want to burn people out, blow up their lands, or sling a bunch of spells, there is a style for you!

Here is my what I've come up with for Rodrigo. Take a peek, because I wasn't able to go over every single inclusion!

I want this series to be as helpful as possible, and they can only get better with your help! Any constructive criticism or suggestions that you'd like to include in this series is appreciated! Please, reach out and send any decks you'd like me to tune-up to thejeskaiguy@gmail.com. You can also find me on Twitter @The_JesGuy.

Next time we will be playing in the dirt with a Muldrotha Lands deck, so make sure to have a compost pile handy!