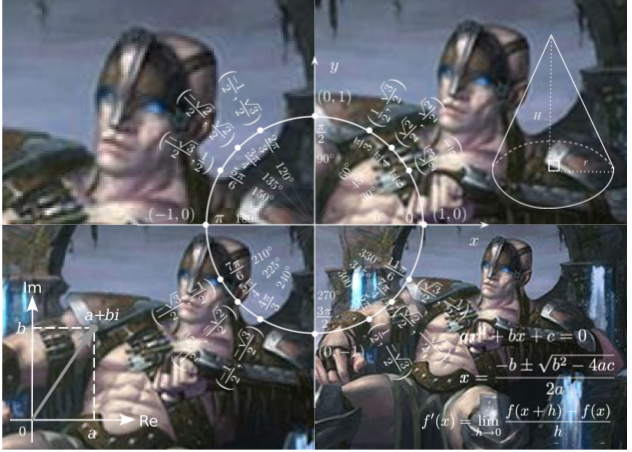 Get out your lifepads everyone, because it's time for a math test! The topic is imaginary numbers. You remember those from high school don't you? No? You probably didn't care. Well know this: your math teacher was very excited the day he or she got to show you a number that isn't real; the imaginary unit, i. With an introduction like the beginning of a mystery novel: "So there's this magical number such that when it's squared it is equal to negative 1." It's an educator's dream for a student to be so moved that they yell out, "Impossible! This is some BULL$#*%!!", and perhaps even flip over a desk, or start singing "I'm Real" and get the room yearning for a time when Ja Rule passed for a backup singer. Alas, complex numbers made up of both real and imaginary parts wash over with disinterest, too far removed from their world-changing origin in the halls of history. Standing on the shoulders of giants, right? Reclining to Reach My Full Potential

This time in the Burning Inquiry series we imagine a world where my Oloro "Over Here Just Doin' Math" deck is allowed to perform as intended. I built this list with a singular goal in mind: spend the entire game doing arithmetic. Regardless of a game's outcome, as long as I didn't miss any lifegain triggers, I want to feel as if I fulfilled my rubric's success criteria. However, what I came to realize after playing the deck was that it was fun creating insane trigger-laden board states, but my playgroup suffered through my non-interactive life-tracking calculations.

Hence, we'll do what all the mathematicians in movies do: confine ourselves in isolation while we imagine numbers swirling around our face. What's going to be on the test?

We get our first mathematical model for the deck based on the commander himself. Oloro asks us to recall each upkeep that he has a simple lifegain triggered ability, thus I constructed the deck to function on simple lifegain additions that trigger continuously. My exemplars here are Soul Warden, Soul's Attendant, Auriok Champion, Leonin Arbiter, Anointer Priest, Suture Priest, Deathgreeter, Blood Artist, Zulaport Cutthroat, Kambal, Consul of Allocation, Authority of the Consuls, Sun Droplet. Another thing that's going to keep us busy are cards that increase the magnitude of these triggers such as Faerie Artisans, Genesis Chamber, Pure Reflection, and of course Panharmonicon.

While this seems like basic addition, this is the fundamental attention our test requires. Imagine this scenario: We've got a Soul Warden, a Suture Priest, and a Genesis Chamber on board, and our opponent has a Fiend Hunter hiding our shiny new Anointer Priest. If we then cast Flickerwisp, of our four triggers we can resolve the exile trigger on Fiend Hunter first, get our Anointer Priest back, which then re-triggers our original three cards as well. We'll end up creating two Myr, gaining 1 life twice from Anointer Priest, four times from Soul Warden, and four times from Suture Priest. Then when the Fiend Hunter returns to play, the opponent can exile a new creature, but first they get a Myr, lose 1 life twice from Suture Priest while we gain 1 life twice from Soul Warden. Now, if we simply add a Faerie Artisans to this scenario, then when the Fiend Hunter comes back we also get a Fiend Hunter, which gains us 1 life from three of our sources while exiling say... our own Flickerwisp to add more shenanigans. Do you feel tested yet? Well, let's add Panharmonicon to this...

Don't underestimate the skill required in simply attending to precision. This is actually Common Core Mathematical Practice Six, so at a minimum we know we hit our standards here. (Please, consider this an opportunity to vent about common core, and post a picture of your kid's terrible math homework in the comments section below.) If I fail, will there be a retake? Is there any extra credit?

These questions are inevitable in a classroom filled with insecure young minds, and you may have noticed we sort of rely on a critical mass of fragile elements to come together. So what happens when we're inevitably disrupted? Perhaps we're not in a good place for the test, shaken by something that happened earlier out in the quad; a bullying episode where some Marath, Will of the Wild Bro called our toughness into question for hanging around a bunch of weak clerics. Why can't people just leave us alone and let us focus on our math! Well, worry not. It gets better. These are formative times where we must exhibit perseverance in problems solving (CCSS.Math.Practice.MP1).

Revenge of the Math Nerds

There are a few ways we maintain our mathematical mindset. For one, we padded our grade with extra credit. This comes in the form of our blink-protection suite: Planar Guide, Mistmeadow Witch, and Eldrazi Displacer. Note that this package not only buffers us against certain removal, it also provides us an additional set of triggers to do math! These cards also synergize well with our other test taking strategy: ETB value from cards that replace themselves such as Recruiter of the Guard, Ranger of Eos, Baleful Strix, Wall of Omens, and Mulldrifter. Another way to keep the math party going is the bevy of recursion these colors offer. We run Phyrexian Delver, Karmic Guide, Reveillark, and Body Double. Pairing several of these cards with Viscera Seer is almost like taking out a cheat sheet during the test. As you've likely seen this classic combo before, you know how the rest of the scene plays out...

I'll activate Marath to kill your board.

In response, I'll activate Viscera Seer several times, sacrifice my board myself, get everything back. Triggers...

Just remember, though you may have the power to go infinite, don't do it! That would mean you don't get to do math anymore, and if you can't do math anymore, what has this all been for? Math is BAE. What will we be learning next?

Recently, I had a student write on a report that as part of their analysis they conducted "FUTURE" math processes. Needless to say, having witnessed mathematics from the future, I'm having a hard time teaching boring, present day arithmetic. Silly, but perhaps she was onto something. It's got me thinking, can we create board states that change the trajectory of math for the rest of the game? Sure Rhox Faithmender, Boon Reflection, and Alhammarret's Archive sort of do that, but people have been doing that math for years. No what I'm taking about are effects that take my math to another dimension. Stranger Things status.

Imagine Tempt with Reflections targeting an Auriok Champion. Who doesn't want an Auriok Champion (that card is like thirty dollars)? And suddenly we get to do math for everyone! Several turns of diligent life-tallying later, now for some reason our opponent wants to cast Wrath of God, and after a Mirrorweave we're left asking, "Why would you do such thing to so many lovely Blood Artists?" The arts are always the first things to get cut, but there's such a strong relation to core subjects like mathematics. Finally, the real dream of this deck is to wrap an Ondu Cleric with an Infinite Reflection. All my math people out there probably know that in a sense we define this as "countably infinite," but... is it really?

If you choose to bring a math test to your next EDH pod rather than just imagining it, remember that people are going to project their mathematical baggage onto you. When you tell them you do math for a living, they'll feign being impressed saying things like, "I was never good at math," or they'll possibly even be combative and claim, "Math is just so boring. I've never used the Pythagorean Theorem in the real world." At this point, look up from your lifepad to tell them that mathematics, like the heavenly voice of Ja Rule, is both real and magical at the same time, and you're excited to discuss this with them... right after you finish adding up all these triggers.