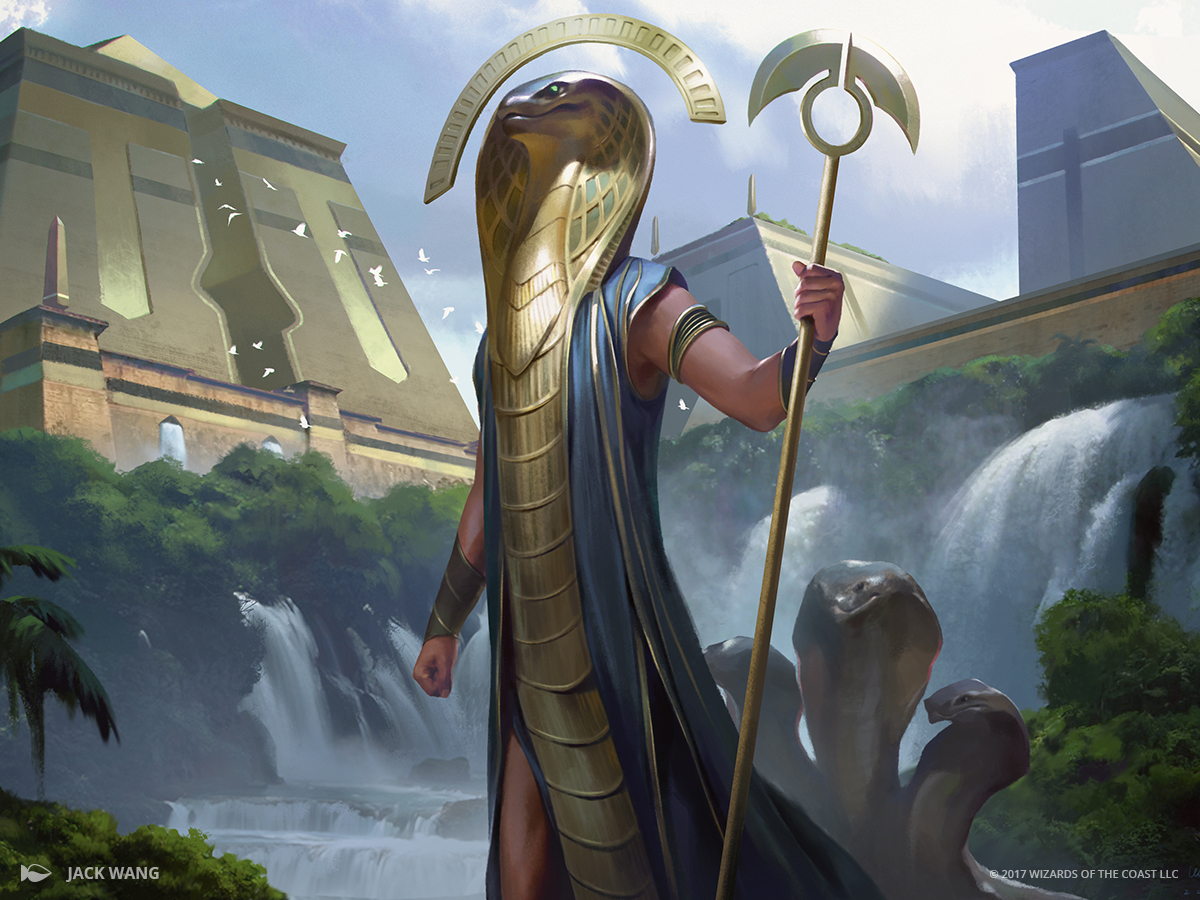 We live in a violent world. Who really knows why our culture is one that glorifies brutality for sport, ferocity for profit, and might imposed on the weak as strength? Perhaps we're too eager to celebrate our athletes without considering the physical toll they pay for our entertainment? Or maybe it has to do with the fact that 90 percent of our movies contain a violent main character? Could it be that our governments spend only $1 on conflict prevention for every $1,885 they spend on military budgets? Today's Burning Inquiry gives you tickets to the gun show as we consider all the violent things we can do with the freshly printed Rhonas the Indomitable, Magic's first ever card to combine (without help) two of the most brutal keywords out there: deathtouch and indestructible. As I write this article, there are a mere 15 Rhonas decks listed on EDHREC, so we will brew with this god of combat in a somewhat unknown arena. However, moving forward, there are some guiding questions that beg to be answered as we try to make a strong mono-green deck with an indomitable brute at the helm.
&nbps If, even at first glance, it isn't obvious what to play in Rhonas, a quick inquiry into the EDHREC page reveals cards that seem justified for inclusion. Furthermore, a common series of effects are revealed.

What do we do with Rhonas?

Right off the top, trample is great with Rhonas. Since deathtouch allows any non-zero amount of combat damage to be considered lethal, when Rhonas is given trample we need only apply a single point of damage to any blocking creatures while we assign all remaining combat damage to the defending player. For this reason, cards like Berserk, Rancor, Vow of Wildness, and Nylea, God of the Hunt ensure Rhonas can 'sneaky snake' some commander damage in. While we're at it, Rhonas also grants trample to our other creatures, which means we can confidently rely on cards with damage triggers such as Keen Sense, Sixth Sense, Snake Umbra, One with Nature, and Mark of Sakiko.

Another theme our inquiry suggests is that Rhonas is looking for a fight. Naturally, since there are a very limited few creatures that can stand against Rhonas. We might as well be playing Rhonas' Punch-Out if we include a package of fight cards in Arena, Mutant's Prey, Prey Upon, Rabid Bite, Savage Punch, Setessan Tactics, Epic Confrontation, Hunt the Weak, Clear Shot, and the ultimate man in our corner Ulvenwald Tracker. We can also get some jabs in with Irresistible Prey, Hunt Down, Provoke, and Feral Contest. Then there are some real upper-cuts that go beyond simple fight effects such as Nature's Way, Cartouche of Strength, Tower Above, and Enlarge.

There's something else lurking in the sub-text of this inquiry though. A few fights in, Rhonas has a reputation, and out on the streets some instigator tells him, "those guys over there are planning to roll on you and take your belt." Including cards such as Lure, Roar of Challenge, Alluring Scent, Taunting Challenge, Bloodscent, Revenge of the Hunted, Tempting Licid, and Shinen of Life's Roar is the equivalent of lending an ear to that instigator while he pulls out his camera-phone and yells, "Worldstar!"

Inquiry #2: We Out Here Now So far we've outlined somewhat of an ulterior motive for our Rhonas deck where the goal is to really get the most KO's. This might leave opponents stand-offish and less willing to throw more fighters into the ring.

How do we tempt our opponents into putting creatures onto the battlefield?

Rhonas doesn't shy away from challengers to the throne and encourages a battlefield filled with worthy contestants. Fortunately there are several effects in green that encourage other brawlers to try and take the belt. For one, we can discourage opponents from playing non-creature spells. Cards like Hidden Gibbons, Hidden Guerrillas, and Hidden Ancients allow Rhonas to enter combat if our opponent slips up. Non-creature play is further hindered with Nullmage Advocate, Caustic Wasps, Manglehorn, Glissa Sunseeker, and Molder Slug. If we really wanted, we could also juice the table on mana with Eladamri's Vineyard, Magus of the Vineyard, and Shizuko, Caller of Autumn. Of course this mana is non-discretionary but at a table of non-combo players, it entices creature haymakers.

There are certainly more direct means of encouraging an arms race. For example, Sheltering Ancient and Evolutionary Escalation allow you to barter +1/+1 counters in exchange for creatures getting committed to the board. Hunted Troll gives an opponent very specific creatures that might keep us busy, while also being a good fighter itself. If we really want to bring out the heavy-hitters, we've got Iwamori of the Open Fist, Hunted Wumpus, and the very risky Tempting Wurm. Bring 'em out, bring 'em out. Finally, the classic Oath of Druids acts as a sort of coliseum gate that random, exciting foes emerge from behind. At this point we seem to be playing a weird, self-fulfilling, mono-green control deck. This might not come naturally and we will need to build with intentional purpose to ensure we last to the final round.

How do we control the game until its conclusion?

First, we need to ensure our punches land. Bonds of Mortality is one way to do that. To further set grounds for a "fair" fight we mentioned some non-creature removal earlier, but those are just body checks. We're also keeping our opponents honest with Reclamation Sage, Ainok Survivalist, Nantuko Vigilante, and Acidic Slime. Next, I can't help but include Wild Defiance with so many targeted fight effects. The card seems to be at the tipping point of being a worthwhile inclusion since it just makes so many other cards in the deck that much better.

If Rhonas is somehow down for the count, we're going to need some other brawlers that can tap in. Here it's possible to diversify our threats with your choice of Hornet Nest, Skullwinder, and to a lesser extent Permeating Mass, Ohran Viper, Phantom Centaur, and Engulfing Slagwurm. I'm running a slight morph package to take advantage of Deathmist Raptor. It's possible we'll also have access to cards round after round through repeated graveyard recursion in Eternal Witness, Den Protector, and Genesis.

Including a bounty of card draw effects is one way to ensure we can float like a butterfly and sting like a deathtouching bee. In green there are actually quite a few options that suite us. Life's Legacy, Momentous Fall, Soul's Majesty, Rishkar's Expertise, and Greater Good all provide mass card draw effects that should keep our plays relevant. Most notable though are the effects that go great with our combat-centric commander: Hunter's Insight and Hunter's Prowess. Then there's the combination of the "lure" effects mentioned earlier with Benefactor's Draught, an elegant hook which when timed right will rag-doll your opponents and set you up better than Mayweather.

Right now our list is a bit rough and needs some fine-tuning. For example, I think the deck might need a better mana ramp suite. With certain adjustments Nissa's Pilgrimage and Far Wanderings could be sweet or possibly a creature package in Sakura-Tribe Elder, Viridian Emissary, and Veteran Explorer. I can even see the deck taking a sort of Enchantress direction with Khalni Heart Expedition, Ordeal of Nylea , and Wild Growth effects, making room for Oath of the Ancient Wood.

That said, even in its primitive state, we've trained a bare-knuckle bruiser here. If your playgroup has been in need of a good old fashioned beatdown, perhaps you should introduce them to Rhonas' fists, Goodnight and Good Luck (or whatever else you want to name them). I look forward to any tall tales you might share in the comments section below.

Cheers to the brewers,