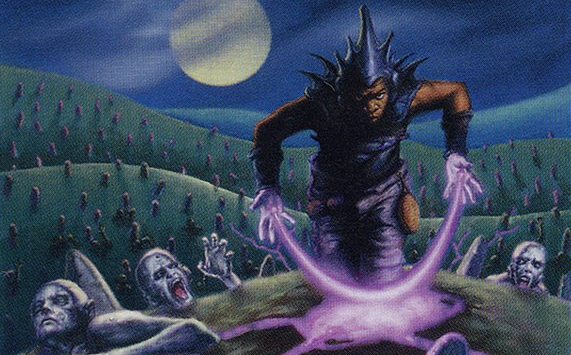 Sweet Dreams are Made of This

Welcome to Challenge the Stats! This series is based on the awesome EDHRECast segment where we pick out cards that might be overplayed, underplayed, or sleepers to challenge EDHREC’s data. Remember, these are merely comments on the data, and card choices made by you, the brewer, for any reason such as flavor, budget, art, or fun are always most important and are what keep our format unique and awesome.

This challenge comes from Die Uschi / Ruben in our Challenge the Stats discord, and it's a great pick! If you'd like to join our discord and submit cards to challenge, you can do that here.

This week's challenge is Restless Dreams, which is only in 543 decks. That's mostly made up of 16% of Anje Falkenrath decks and 2% of Syr Konrad, the Grim decks. Does it deserve to be in more decks? Let's see if we can convince you.

Restless Dreams is a one-time burst discard outlet and creature recursion spell for one mana, which can be a fantastic rate if we use it right. If we care about discarding cards or moving creatures between our hand and graveyard, it's definitely worth a look. It's part of a cycle from Torment, and its flavor text mentions one of my favorite commanders, Braids, Conjurer Adept. I regretfully don't know too much about the lore, but if you do, please let us know in the comments below!

Two mana is the standard rate to Regrowth a card, and black can typically only hit creature cards (Phyrexian Reclamation, Order of Midnight, Corpse Churn, Oversold Cemetery, etc). There are some other famous one-shots that only cost one mana (Omen of the Dead, March of the Drowned, Ghoulcaller's Chant, Disentomb, etc). In EDH, we want more bang for our buck or consistent card advantage than just a one-for-one, which is why Phyrexian Reclamation is so popular, showing up in over 17,000 decks.

Restless Dreams is a pretty efficient graveyard recursion spell, mana-wise, but it requires that we discard a card for each card we want to dig out of our 'yard. That discard effect isn't always a downside, though. Some commanders like the discard very much. That's why this spell is already being played in 16% of Anje Falkenrath decks, and there might be a few other commanders that would like it, too!

Tortured Existence is a really nice parallel card. It has a leg up because it's an enchantment that can produce consistent value, but a slight downside of requiring that we discard a creature, whereas Restless Dreams doesn't care what we discard. Undertaker is another comparable card, but since it has the tap requirement, and it's on a very killable creature, it makes sense that it's in fewer decks than Restless Dreams. However, there are plenty of decks who might prefer the one-shot version of this effect.

Thus, let's take a look at some commanders who might want to play Restless Dreams.

For new commanders, we have Sefris of the Hidden Ways, who can venture into the dungeon when we discard creature cards and then reanimate them later. Asmoranomardicadaistinaculdacar also likes Restless Dreams, since she can be cast when we discard, and she can reanimate creatures we discard with The Underworld Cookbook.

There are several commanders partnered with Tormod, the Desecrator that like to use Tortured Existence, including Kamahl, Heart of Krosa, Sidar Kondo of Jamuraa, Keskit, the Flesh Sculptor, and Ravos, Soultender. Ghost of Ramirez DePietro sticks out as one that can also benefit from creatures going in and out of the 'yard, so if we're playing the enchantment version of this effect, the one-shot sorcery could add some redundancy.

Garna the Bloodflame is great too. This commander can get back any creature cards we discard, or any other creature cards already put in our graveyard, for a no-downside mass Gravedigger effect!

Reanimator decks can use Restless Dreams to great effect as a discard outlet. Unfortunately, we do need legal targets in the graveyard before we even cast the spell, so we can't discard something big on turn one to reanimate it on turn two. That likely takes Restless Dreams out of the running for particularly fine-tuned decklists, but sacrifice decks often have a Sakura Tribe Elder, Merciless Executioner, or Diligent Farmhand in the graveyard early in the game, meaning we could reanimate a big creature on turn three or four, which is plenty early for a casual meta (and not completely backbreaking for our opponents).

Any deck that's playing Reanimate, Animate Dead, Persist, etc. and looking to sneak out an Eldrazi or Archon of Cruelty without paying full cost will be happy to have a discard effect to make that happen. I'm looking at Karador, Ghost Chieftain, Meren of Clan Nel Toth, Nethroi, Apex of Death, and more! Restless Dreams can be a backup plan for Chainer, Nightmare Adept if our commander gets removed. Whisper, Blood Liturgist can discard the card she wants to reanimate and get back some more sac fodder. Muldrotha, the Gravetide doesn't mind discarding cards because she can get them back later, and if she's not around, Restless Dreams might help us get back a key creature that we lost.

Greven, Predator Captain can discard extra lands he draws with his ability to Restless Dreams to recur creatures the he sacrificed to his ability. I know Greven is an engine that can easily draw a ton of cards, but if we ever run out of steam, Restless Dreams can help us get back on track.

Syr Konrad, the Grim loves a way for creatures to move in and out of the graveyard! If we have a stacked hand (even one that's flooded with lands), we can discard it to get a handful of creatures entering and leaving our 'yard, and loads of Konrad triggers! Remember that we have to have targets in the graveyard before we cast the spell, but if we discard tons of creatures, and return a bunch of different creatures to hand, that's a lot of pinging from Konrad.

Anje Falkenrath can use Restless Dreams as a very cheap discard outlet to enable Madness shenanigans while getting value back to our hand–maybe even some key Madness creatures we discarded earlier, making Dreams a pseudo-tutor when our graveyard is full.

Varolz, the Scar-Striped is a fantastically underrated commander that can use Restless Dreams to get back some creatures he sacrificed and pitch some creatures that might be good Scavenge targets, such as Force of Savagery or Death's Shadow.

What Dreams Are Made Of

Are there any other deck you think would like Restless Dreams? Do you have a suggestion for a card to challenge? Let me know in the comments below, or tune in to the Challenge the Stats Discord here! As always, you can find me on twitter @jevin_mtg.