Welcome to Challenge the Stats! This series is based on the awesome EDHRECast segment where we pick out ten cards that we think are overplayed, underplayed, or sleepers to challenge EDHREC’s data for a commander. Always remember, dear reader: card choices made by you, the deckbrewer, for any reason such as flavor, budget, art, or fun are always most important and are what keep our format unique and awesome.

Last article, readers voted on Varina, Lich Queen. I had an interesting request from EDHREC reader Cyberium, to challenge non-Zombie Tribal Varina decks, and I was intrigued. I'm going to take a moment to talk about how I found the data to challenge, so if that doesn't interest you, feel free to skip to the list below.

A non-Zombie Tribal Varina deck would still use her Zombie tokens, of course, but focus less on casting Zombies and more on discarding cards and exiling them from our graveyard. Most of the almost 1900 Varina decks are Zombie tribal, so my first task was to find data similar to the type of deck I wanted. Varina has a Zombie Tokens theme and a Discard theme, but those still look like Zombie tribal when we see cards like Diregraf Colossus and Rooftop Storm showing up in such high numbers. So that's my first challenge! If we're looking for non-Tribal Varina data, her current themes are so heavily imbued with Zombie tribal that we need to do a little digging.

This is a great opportunity to highlight one of the best features of EDHREC: Advanced Filters. This let's us pick and choose signpost cards to include or omit from the data that we're seeing. 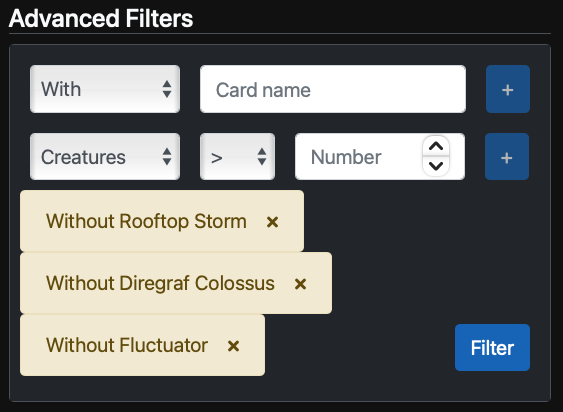 I started out by having EDHREC show me decks without Rooftop Storm. The data still looked pretty Zombie-licious, so I went a step further and asked it to show me data from decks that also didn't include Diregraf Colossus. Now we were getting somewhere! However, I was seeing a ton of Cycling cards. That's definitely a great direction, but it wasn't exactly what I was looking for, so I also asked the advanced filters to omit a hallmark Cycling card, Fluctuator.

I was left with 287 decks that really looked like the style of deck I was going for. We still have Zombie cards, but they're there for pumping our tokens, not for caring about casting Zombies. We still have some Cycling cards, but incidental Cycling could be helpful!

We're going to challenge the data from all 287 Varina non-Zombie-Tribal, non-Cycling-themed Discard decks at the time of writing, and you can see how often those cards are played in parentheses (%). Here we go.

Sorry, did you get a haircut?

Dreadhorde Invasion often gets overvalued as a Bitterblossom analog. It's okay in the right deck, perhaps one that can sac' the 1/1 Zombie for value, but I don't think it's this deck. Invasion could help us get going early by giving us an attacker for Varina, but it's pretty much a dead card late game. We're also going wide, not tall, so we're not planning on hitting that second ability.

We should be pretty critical of cards that say "nontoken creature". This could get us a few bodies to help recover after a board wipe, but we have a handful of other ways to do that. We'll have a few nontoken creatures, but our board will be mostly full of Zombie tokens. It's expensive, but I'd rather have Overseer of the Damned as board wipe protection because it's less likely to "do nothing".

We want our cards to get into the 'yard, and Bag of Holding prevents that from happening, instead exiling those cards into the Bag. We can get them out again later, but I think this is counter-productive to our gameplan. The bag is better-suited to a deck that doesn't rely so heavily on cards being in our graveyard, and Library of Leng is going to be better for us if we want to save a card for later. The same goes for The Cauldron of Eternity (8%). We really don't want to be preventing cards from hitting our graveyard, even if these cards are situationally helpful. This deck is a train of Zombies that picks up speed, and we're going to highly value cards that are good both when we're just getting going or if we're at full steam.

I want to lean on some Windfall effects to dump our hand into our 'yard and end up net positive on cards in hand. Jace's Archivist and Whispering Madness are other great effects for this.

Our plan is to draw boatloads of cards so we'll hopefully drop tons of 8/8s onto the battlefield with this cheap enchantment. Wait, does it also have Cycling?

Pay life to fill the 'yard? Heck yes. The five-drop slot is a crowded one, but since we're gaining life with Varina, we can afford to lose some. Dana Roach will be the first to tell you that any unspent life at the end of the game is a wasted resource, and you can often see him take eight life from Sylvan Library or Sign in Blood his life total down to one Wednesday nights on twitch.tv/EDHRECast.

8. Sage of the Falls

Every time we make a Zombie, we get to loot. That's awesome card selection, and it helps us dump our library into our 'yard! Also see: Murder of Crows.

Is this the deck to make Ob-Nix work? I keep trying, but he's just not great. However, 52% of Wheel decks are playing him, and I think the extra utility here might just be worth it. We're running a handful of Windfall effects so his static ability could do some work. Beyond that, he doubles as removal for our opponents' creatures and card draw for us at the cost of a Zombie. I'm love/hate-twisted about it still, but let's give Ob a chance.

This is a great pick from EDHREC writer Joseph Megill. It's a risky one, but hopefully we'll be able to get more advantage from this than our opponents. We'll make everyone discard and return three cards from their graveyards to their hands, and we know that our 'yard will be stacked with goodies.

This deck wants to turbo-discard to fill our 'yard, then exile our own graveyard to build a huge board of Zombie tokens.

I love that we have many different win-conditions in this deck. Besides making our Zombies more threatening with Aven Wind Guide, Wonder, Gleaming Overseer, and others, we can also win through other lines of play, such as Psychosis Crawler, The Scarab God, Syr Konrad, the Grim, and the oft-forgotten second ability on Bolas's Citadel (also Thassa's Oracle if you want to add it). I also think this is a deck that could reasonably pull off the Command the Dreadhorde/The Wanderer combo, since it works if we've already pitched The Wanderer to the yard.

Note: MDFCs are not counted towards total lands. Total land count including MDFCs = 40.

Are there any other cards you would challenge for Varina? Are you tilted that I didn't include Narset, Smothering Tithe, and Hullbreacher? Let me know in the comments below! As always, you can find me on twitter @jevin_mtg or shoot me an email @ jevinlortie@gmail.com.

Don't forget to vote on next week's Challenge the Stats below!