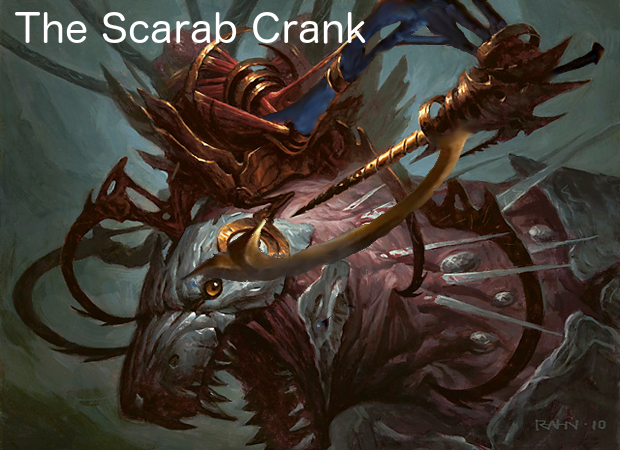 Not too long ago, the plane of Amonkhet learned of the existence of three previously unknown gods that might actually be more powerful than the ones they know and love. Some of you may know this already, but I recently made a deck with The Scarab God for the Commander Time! podcast with the purpose of facing off against the other two Grixis-aligned gods and hopefully gaining a better understanding what is going on. My first build was a very zombie-centric and not very focused, but we can rebuild it, faster and stronger than before.

This deck doesn't focus on any one combo, but there are a few key cards that should probably be mentioned when discussing The Scarab God. The first pair are probably the best value cards for any deck that is looking to this god as a commander, but doesn’t want to run all zombies.

The ability to scry X and take out large chunks of life was one of the most powerful things The Scarab God did during the games against Nate and Dean. If we reshape each creature into a zombie we can end games very quickly.

The next set of cards are going to be the instant mill plan. Why instant? It just sounds fun.

Mindcrank with our commander’s ability is just amazing, every one of our upkeeps, we get more toys to play with in our opponents’ yards and even if we do end up decking them, we get to keep our 4/4 copies until the game is done. That is just value. The Bloodchief Ascension and Duskmantle Guildmage, once activated, goes infinite with either any discard, mill or life loss while Mindcrank is on the field. So make sure you pass the turn and before we start losing friends, exile the best creatures from their decks and apologize.

As far as the deck goes, the current iteration is very oriented towards value from creatures so we can buy them back with our commander, or with Zombie Apocalypse, as long as Conspiracy is out. Besides the base creatures we also have some big mana plays we can make that will fill the graveyards with precious spells while creating some decent amount of value.

The big three cards that we want to sandbag for as long as we can are, Dread Summons, Dark Salvation and Army of the Damned, so we can really maximize our spells. Played towards the end of the game with low life totals, this could easily finish off any players who have managed to stabilize.

The trickiest part about the Mindcrank combo is getting all the pieces down and saying with a straight face that you are not a threat and should not be targeted. To that end, I suggest trying to get Bloodchief Ascension out early, as that can steal early game wins because no one had removal for it. Assuming it does get a Krosan Grip pointed at it, Duskmantle Guildmage is much less of a threat, just look at him, a guildmage from a guild that is definitely not real and definitely not going to kill you if they were real. How much harm could he actually be? Once you have the mana for Mindcrank and an activation, that’s when we get them for all their life and all their cards. Queue evil laugh track here.

Outside of this combo, we should also talk about Xenograft and Conspiracy when it relates to creature cards in our graveyard and hand. Xenograft adds the creature type to each creature you control, this does not include your graveyard or cards in your hand or anywhere else for that matter. Conspiracy, on the other hand, is far more interesting, as it turns every creature and creature card into the chosen creature type. That Baleful Strix in your hand? Not a bird anymore, it’s a zombie. Or horse. Or wizard. Or beeble. Most likely zombie though. This is how Zombie Apocalypse brings back all our creatures to end the game, Xenograft is used for finishing out a game where our board never got wiped.

Graveyard hate is going to be rough on us, but it's not the end of the day, since we plan on trying to value our way to the win, there is a good chance that we will be able to win despite any yard hate that pops up. Fortunately we are in blue so we have a few counterspells that will help us stop the worst case scenario of a Leyline of the Void or Rest in Peace.

The next weakness of a deck like this is anything that is just too fast for our deck to get going. Perhaps it might be better to pillow fort up some more in the deck by including a Propaganda or No Mercy to buy some time so our value engine can start up. The best we can do against aggro decks is leave up blockers and cast every board wipe we can until we’re dead.

The Scarab God is a very open-ended commander. He feels very much like the value commander the Dimir players didn’t have up until this point and I wouldn’t be surprised if he is chosen as the go-to commander for mid-range, non-themed decks in the future for the color pair.