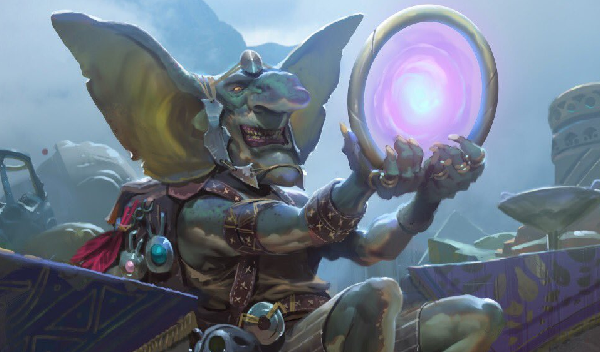 You know what time I'm talking about everyone: Commander Christmas! Commander 2018 is upon us and the decklists are spoiled. The ghosts of precons past are trying to haunt us (depending on who you ask, at least) but I cannot proclaim enough how awesome I think this year's Commander product is. You'll hear Joey, Dana, and myself go into it in more detail on the upcoming EDHRECast, but today you're stuck with just my thoughts on the new red cards in the set. Red, as always, is the "6th best color in Commander," according to Jason Alt, but I think there are some hot new toys in this set for fire mages to jam. Let's get into it! 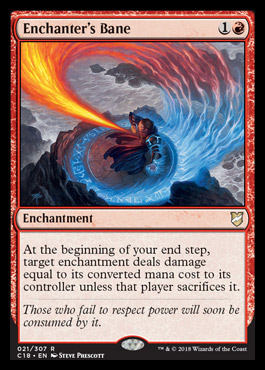 Aaaaaaaaaaand this is how we start off the set review. For you Vorthos-y, design-model types, this is a struggle. Red is known for not dealing with enchantments well, since fire can't melt the ethereal, so I think this is about as good as you'll get when it comes to red enchantment hate. Is it great? Probably not. Still, if you dome someone for a couple turns while their Cast Through Time is in play, or blow out the pillowfort Stasis goon because they don't know how to close the game... I can think of worse cards than this. The problem is finding a commander that wants this card, and outside of the desperate political decks like Queen Marchesa or the like, I can't really see it taking off. Remember, if it's the last enchantment in play, it has to target itself. 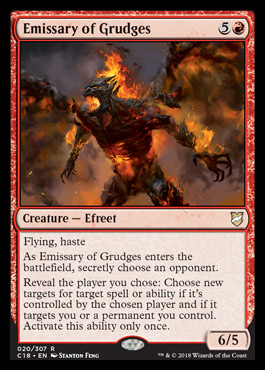 Another card with the Stalking Leonin ability, where you secretly choose an opponent and get a good payoff later. I do like the way you can basically bank this Redirect effect and then use it later, but that also means that this fiery Efreet has to live long enough to be useful. Flying and haste aren't bad, but I'm just personally not super excited about this card. I do enjoy this design space, however. It's cool that they continue to explore space like this, I just wish instead of redirecting a spell it was a Reverberate instead. Then you could catch my ears perking up a tad. 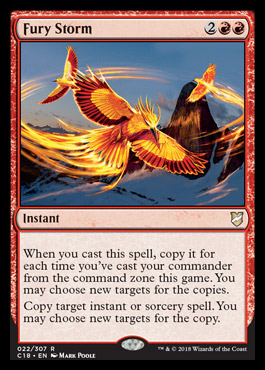 Fury Storm is part of a new 'Storm' cycle, one for each color. Rather than track the number of spells cast this turn, like normal Storm, you have to track how many times you've cast your commander throughout the game, reaping extra benefit for each time you have cast it. If you're playing a commander that has a target on its back the entire game (especially Voltron commanders) then this card might be just the ticket you need to catch back up in the later half of the game. I know that my Valduk, Keeper of the Flame deck will probably slot this in is as a way to copy someone's massive draw spells. However, the downside to this cycle is that they lose a lot of luster if you play decks that don't over-utilize the commander, or merely cast it once and sit comfortably behind it. My EDHRECast cohost Joey really likes this card, calling it the best of the new 'Commander Storm' cycle, particularly because of the way it synergizes with Partner commanders, triggering additional times for each time they've both been cast. I'm a little inclined to think that maybe, at the very least, he's not totally wrong. 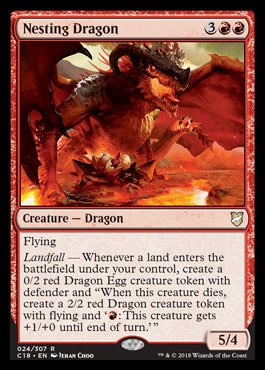 Commander players love Dragons. The Ur-Dragon's popularity proves that. With Lathliss, Dragon Queen giving mono-red Dragon decks a shot in the arm recently, there are even more Dragon players primed and ready. When I first saw this card, I thought it was kind of awkward that it makes a token that makes a token. If you're playing Purphoros, God of the Forge or Impact Tremors, then Nesting Dragon rustles your jimmies like no other.

Nesting Dragon also fits in with Landfall strategies, but it's a tough call. Those decks are already stuffed with tons of valuable pieces, so it's sometimes hard to make room. Omnath, Locus of Rage tends to be a bit more aggressive than 0/2s, but he might like the additional insurance these tokens provide after a board wipe. Outside of that, though, I'm not sure how many non-Dragon decks will play this one. If you like Dragons, there's probably plenty of room to cuddle up to this one, especially ol' Lathliss. 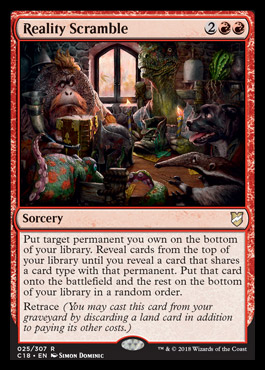 EDHREC progenitor Don Miner had a Polymorph-themed deck for quite some time, and upon seeing this card, he instantly said, "Well, now I wish I wouldn't have taken it apart." Repeatable effects like Retrace certainly are desirable, and will probably put Reality Scramble up among the top of the heap of Polymorph effects. If we're being honest, I read the name of the card and instantly was disinterested and assumed it was some chaos card. I wasn't wrong, necessarily, but this is a very fine card and will probably see a fair amount of play in decks that like this effect.

Pro tip: If you only have one planeswalker in your deck - such as Lord Windgrace, the guy whose deck contains this card in the first place - you can activate your planeswalker's loyalty ability, target it with Reality Scramble, then put it back into play and immediately reactivate another loyalty ability. It's a cool way to reset loyalty or get additional activations; like Modern Living End decks, sometimes you can manipulate the chaos by building your deck around a cool loophole. 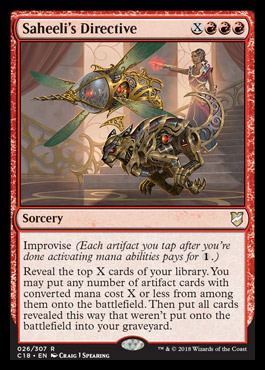 A big splashy Genesis Wave spell for artifacts? Heck yeah. I think this could be one of the most-played red cards from Commander 2018. Genesis Wave is played in over 10,000 decks at the moment, and now red has its own version, with Improvise to help out with the cost. Daretti, Scrap Savant and other artifact aficionados are about to give this spell a lot of love. I don't think people realize just how wild Improvise can be in Commander, either. I know I personally sold the mechanic short for a long while, up until it was literally beaten into my memory. There are plenty of artifacts that just sit idly on the board in Commander, and this helps you find even more of them. Don't get crushed too hard when your buddy plays this one. 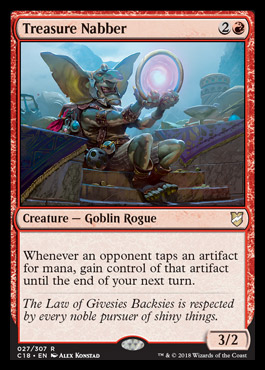 Treasure Nabber is one of the more polarizing cards in the set. Most people out there love it; it lets red actually ramp a decent amount, and it has some important implications with Krark-Clan Ironworks (which are sweet, by the way). Othersthink it doesn't do enough. If you ask me, those folks are crazy. Who doesn't want to turn someone else's Sol Ring into a "Stole Ring?" Huh? Anyone? Anyone...please!? That was a good joke and you all know it.

Anyways, Treasure Nabber. It's really stinking good. It's really fun, and it's upside is CRAZY. If you have any way to sacrifice artifacts in your red deck (which, let's be honest, you probably do) this card is going to impact the board right away. It will either discourage people from using their own stuff or make sure you get to use it too. In either case, it's a win.

Side note, the flavor text is on point here as well. Superb. 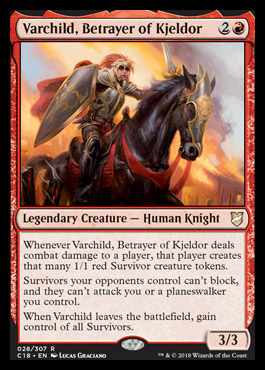 Mono-red legendaries don't really ever get their due, so I'm going to let the Commander Time folks drop some knowledge on why I think this one deserves a second look.

Friggin' spice like no other. Is it good? Not always, but that's the fun part. If you're playing mono-red you're not in it to win it every time. Even so, you'll get plenty of proverbial gooses/geese/goosí with that fun little combo, so you already know it's worth the effort. 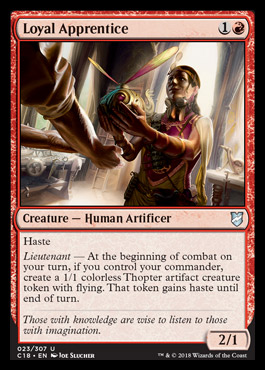 I am very glad that the Lieutenant ability came back again this year. It encourages players to work with their commanders more and more, and for a format whose player base resented the old tuck rule change so much, encouraging players to cast their commanders never seems like a bad thing. Sadly, mono-red gets the short end of the stick when it comes to the cycles here (something that shouldn't surprise you). Casting this on turn two means you probably won't be getting a Thopter here unless you're all-out aggro with that Zurgo, Bellstriker plan. Of all the new Lieutenant cards, I think this one will make the least impact, but as I've said before, if I go on record thinking it's not that good, I'm bound to get crushed by it from nowuntil I unsleeve my decks for the last time. I'm glad to be proven wrong, because the Lieutenant cards are always sweet.

And there we go, all your mono-red newness you could have asked for. What do you all think of the new set? Is it enough to carry you into 2019 when we get this again or were there some misses? Let me know in the comments! Thanks everyone!