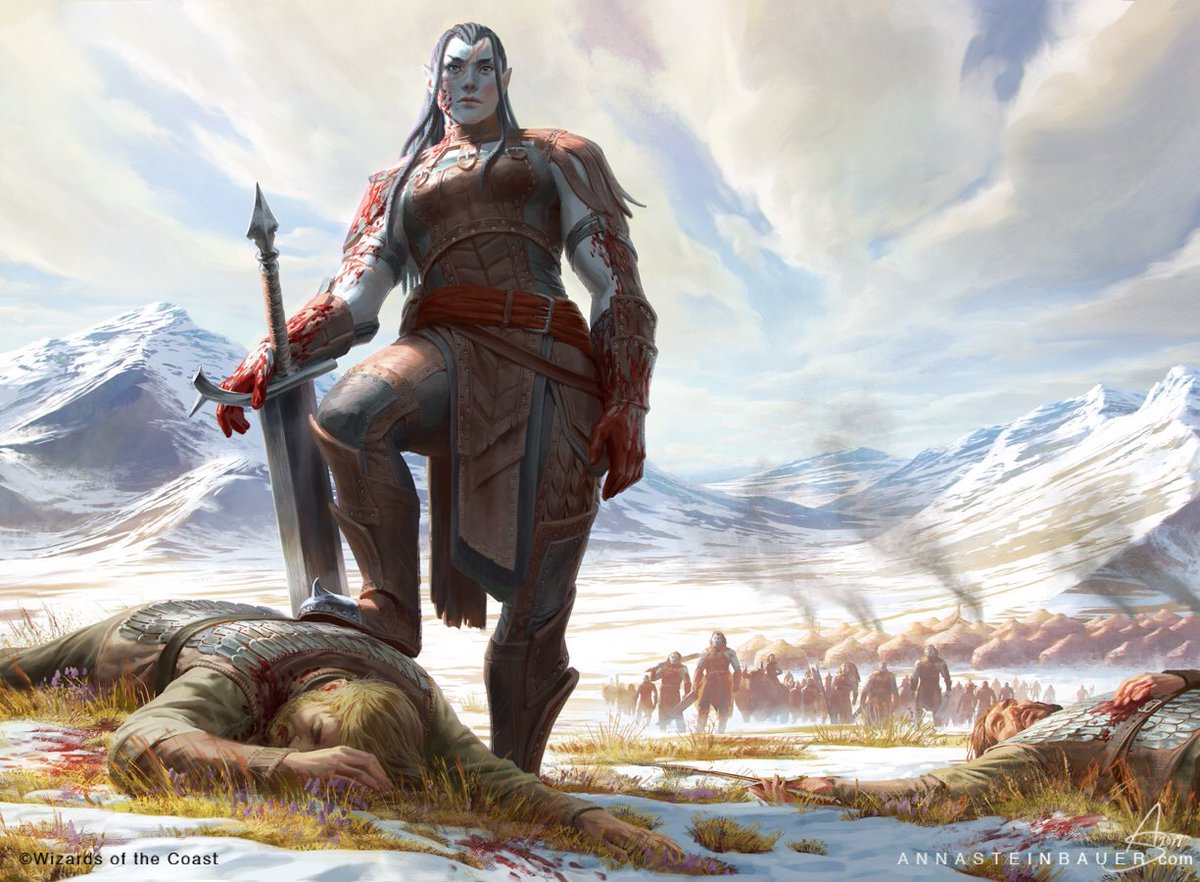 Picture in your mind an elf that taps for mana. These are colloquially known as "mana dorks". Given that descriptor, you can probably extrapolate some ideas about this type of character.

Do those ideas include decent power and toughness, haste, and an urge to charge into combat?

Grand Warlord Radha is in fact an elf, and in her own way, unless she has vigilance, she does tap to give you mana. Just don't call her a "mana dork". Whenever one or more creatures you control attack, add that much mana in any combination of R and/or G. Until end of turn, you don't lose this mana as steps and phases end.

The more creatures that attack, the more mana we get. We want a deck with lots of creatures.

In fact, as an extra challenge, this article will brew a deck that is only creatures (and lands). We already know Bedlam or Goblin War Drums or Raging River would be good, but let's really dig down into the available creatures to see what we can find, and ultimately make a deck that Ruric Thar, the Unbowed would not find objectionable in any way.

If you have seen a deck that used Xenagos, the Reveler effectively, then you already have some ideas on what goes in here, and they probably involve token creatures. This deck might have some similarities with Neheb, the Eternal or Sakiko, Mother of Summer converting combat into mana, but Radha gets her mana earlier and can potentially use it effectively before combat damage is dealt. In other ways, the deck may be similar to Grenzo, Havoc Raiser in its need to have a fast multitude of attacking creatures. The more creatures we can send into battle, the more effective our commander's ability becomes. Unlike Selvala, Heart of the Wilds, it's not the power of our biggest creature but the sheer number of them that matters for our mana. Radha is both an Elf and a Warrior.

Elf tribal is an acceptable strategy, with enough elf lords to boost each other's power and toughness and perhaps make more token elves, or token insects, or token wolves, or whatever other token creatures the elves are making lately. Warrior tribal is less popular and less supported, but there are some gems like Boldwyr Intimidator who can use mana at instant speed to directly support our commander. If you are feeling more Grenzo-ish, a goblin tribal build is probably feasible with green support creatures. For the masochistic hipsters among you, the colors are well-suited to werewolves and/or maybe dinosaurs as well. Eldrazi Drones are also available in 0/1 Spawn and 1/1 Scion token varieties if you simply must get an extra mana surge at the expense of your tokens.

While Kessig Wolf Run is an easy answer to the question of how to best use Radha's mana at the right time, we won't always have that on the board every game. What other creature-based ways can we productively use a pile of mana during combat that will have a decent effect before damage is dealt?

There are creatures in red/green with the flash ability that can be cast at instant speed. Many of those don't do much other than exist as a future potential blocker. A few of them, however, have the potential to affect a combat that is already in progress.

Depending on your creature tribal choices (if any), some of these won't be applicable to your deck. Great Oak Guardian, on the other hand, is a better example of the kind of creature we want.

Depending on our other cards, Quick Sliver, Shimmer Myr, or Yeva, Nature's Herald could indirectly affect the current combat by allowing the casting of additional synergistic tricks at instant speed. Dualcaster Mage arguably fits in this category as well, but this deck has no use for that trick.

On other types of creatures with flash, any creature-heavy deck will have challenges dealing with hostile board wipes and this deck qualifies as creature-heavy. In the event of disaster, Vile Redeemer and Caller of the Claw can help speed our recovery with an instant backup token army in reserve.

Some creatures have abilities that let us pay mana to get something out of it. Let's hop over to scryfall.com and look for creatures that have an activated ability (which may or may not cost mana).

Red/Green Creatures with an activated ability

If our creatures are attacking, then they have presumably already tapped and thus can not tap again...

Red/Green Creatures with an activated ability that doesn't require tapping

Our strength comes from our creature count, so we don't want to sacrifice them if we can help it.

These lists are still way too long for this article, so let's summarize some trends. There are many creatures with an ability to pay {R} to add +1 to their power without tapping. Many of them are dragons. This isn't a very interesting ability, unless our commander gets to use it to kill with commander damage, (or unless it also has infect like Ogre Menial). Fans of the original Radha, Heir to Keld already know about using the bloodrush ability to discard a creature (specifically Rubblehulk) and boost their commander enough to kill an opponent with (probably doubled) commander damage. Creatures with morph can be turned over at any time by paying the mana, even during combat with the mana that Radha gave us by declaring attackers earlier in the same combat. A very few of these morphers, Warbreak Trumpeter, Thelonite Hermit, Broodhatch Nantuko, and Hooded Hydra all have the potential to give you a pile of creature tokens for the next time you want combat. Monstrosity is an ability that can be done once per appropriate creature, flipping the toggle switch on a creature to being "monstrous", adding some +1/+1 counters, and maybe doing something else that we would like at the same time. Here's a list of potential monsters who do more than just boost themselves with counters or the occasional keyword. I actually like almost all of these.

Not all formidable abilities cost mana to activate, but some do. If we have 8 power worth of creatures on the board, then these creatures can do a little something extra. If we don't have 8 power worth of creatures, then we already have bigger problems. Stampeding Elk Herd and Atarka Pummeler are my favorites here, along with Shaman of Forgotten Ways for the extra ramp and the occasional win condition.

Sometimes you just want a creature that can keep generating creature tokens for as much mana as we can pour into them. Here is a list of some of those creatures that we haven't seen yet. Looking at the creature lists so far, it feels like there is something missing. We are in red and green and plan on sending large numbers of creatures into combat. There should be more in here along the lines of Stampeding Elk Herd or Atarka Pummeler that help all of our attacking creatures. Let's borrow some of the wording from our desired cards and search some card text for an ability that triggers when this creature attacks and helps all the creatures you control. Maybe we'll see what's missing... As mentioned earlier, this deck is all creatures all the time. No Vandalblast, Decimate, Hull Breach, Blasphemous Act, or Artifact Mutation. Not even a Cultivate or Kodama's Reach. There are existing creatures who can sort of do some of those things. Maybe not as mana-efficiently, but those things can sort of be done. Upgrade the land base as your budget allows.