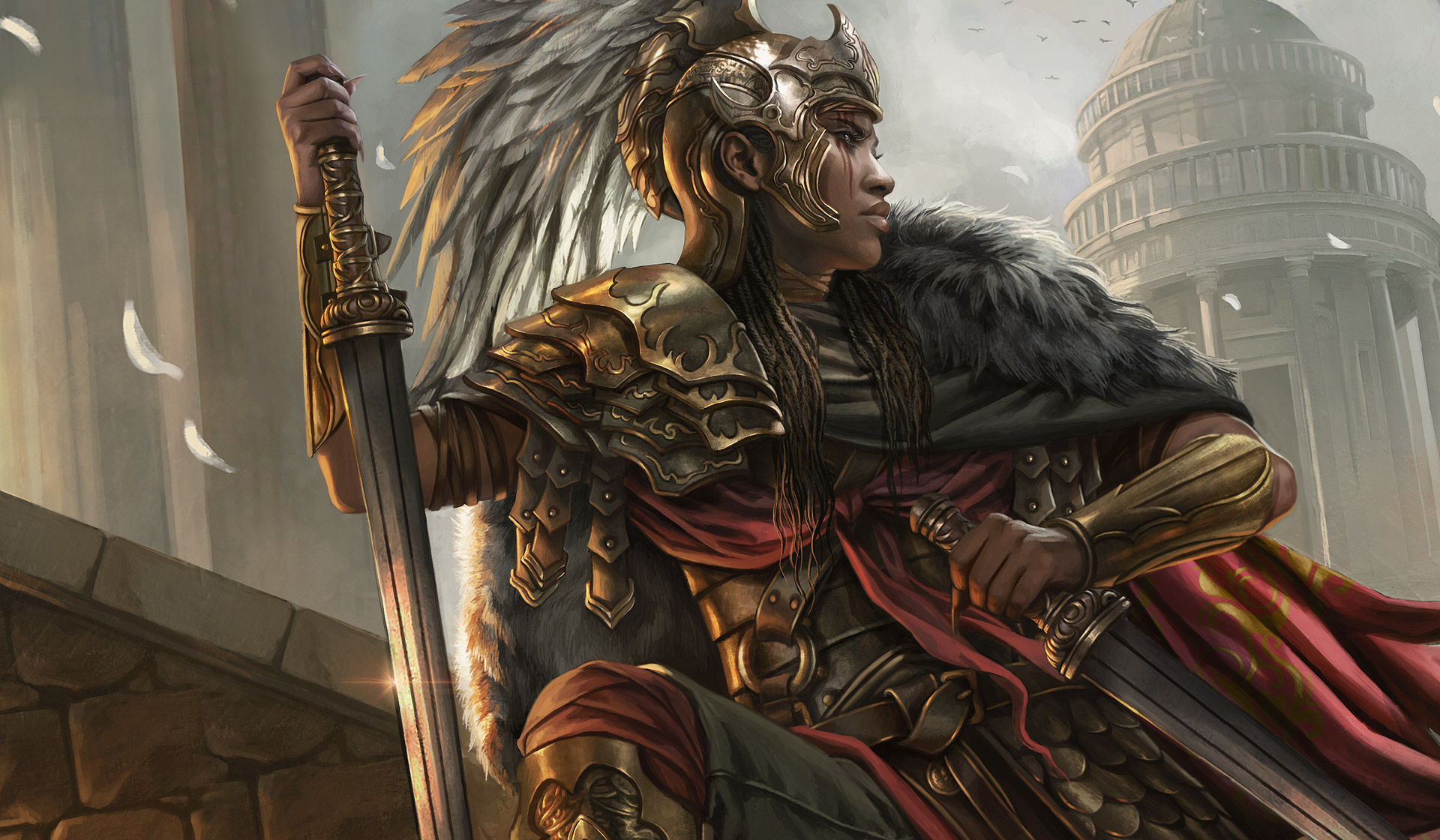 Now that I've covered each of the partner commanders in their own articles (until Commander 2019 Partnerpalooza, that is), we need some new legendary creatures to talk about. Luckily, Commander 2017 is here with some new hotness. In the spirit of my articles, we don't have that much data about these particular commanders yet, which makes the article more intellectually challenging to write. Some of the lack of data may be due to some of the new legends just not being very good, and thus players don't see the point in building decks for them, but some of that may just be due to unrealized potential. Today I'll cover one that I think has potential, Licia, Sanguine Tribune (123 decks at this time). Ignore the mana cost for a minute. She's a 4/4 with first strike and lifelink. Oops, did I say 4/4? That should read 7/7 since we can (and will) pay five life to add three +1/+1 counters once on each of your turns. Maybe doing that right after blocks are declared in our combat phase. Unfortunately, since we don't have access to either blue or green, we can't do all that much to increase the number of counters beyond that. A 7/7 with benefits qualifies for consideration as a voltron win condition with commander damage, especially if she survives to be a 10/10, or 13/13, etcetera.

Now let's go back to that mana cost.

Paying eight mana for a 7/7 with first strike and lifelink is a reasonable cost, but we could potentially get that down to just three mana if we can gain a bunch of life first. If we gain more than five life, the extra can be applied to the discount to pay for any required commander tax if this isn't the first time we've cast her. There are plenty of ways to gain large chunks of life in white and/or black, most of them at sorcery speed. So it is relatively easy to pay some mana to gain life, hopefully gaining more life than the mana you paid, and get your Licia too. If we happen to get our Cabal Coffers and Urborg, Tomb of Yawgmoth on the field then the mana cost is less of an issue. That's not the problem. We'll get to that in a bit. Honestly, if you want full vampire tribal, then Edgar Markov is a better commander pick for these colors.

We can narrow it down to vampire-themed cards that specifically have something to do with lifegain to get something more appropriate for Licia while staying on theme. The Commander 2017 Edgar Markov precon that contains Licia also contains Blood Tribute, Blood Artist, Falkenrath Noble, Vampire Nighthawk, Blood Baron of Vizkopa, Tithe Drinker, and Sanguine Bond. For commander voltron support, Rakish Heir and Bloodsworn Steward happen to be vampires that can help Licia.

Outside of the precon, there are vampire lifegain possibilities such as Vampire Cutthroat, Gifted Aetherborn, Drana's Emissary, Cliffhaven Vampire, Defiant Bloodlord, Exquisite Blood, Debt to the Deathless, and of course Vish Kal, Blood Arbiter. We could get a good start on this deck by going to Vish Kal's page and adding our favorite red cards, but there doesn't seem to be enough vampires who also do lifegain yet to fill an entire deck. Since red/white/black is arguably the best color combination for removal, one possibility to just keep the bloodsuckers that we have and load the rest of the deck with removal good stuff. May I suggest Fumigate and Paraselene?

The challenge for Licia is to gain all of the life before our combat phase so that we can cast her and hit someone with a hasty Licia before having more than eight mana on the board. We're in red. We have a large beater. We want haste. If we do all of our lifegain sorceries and attack with our flying lifelink weenies so that we can cast Licia second main phase, then congratulations, our commander sits there for a full turn cycle to be the target of all those fun removal spells our opponents have. This plan is suboptimal.

We need ways to gain a significant amount of life (let's say three) before our combat step and still have mana left over to cast Licia. This rules out depending on lifelink weenies with evasion since they gain life for us at the end of combat. This rules out expensive lifegain sorceries, since we may not have mana left to cast Licia. Extort is a possibility for minor discounts if we have some one-drops to cast and extort so that we gain more life than we paid in mana. That's not a large net gain though, and it has troubling implications about the deck's mana curve.

Here are some lesser-used ways to gain significant life before our combat step at a low mana cost, usually during our upkeep.

Augur il-Vec (43 decks) not only has gratuitous italicization, it can self-destruct for a turn-four Licia.

Dega Sanctuary (65 decks) is a card that only Licia could love. But she does!

Gerrard Capashen (37 decks) on turn five could get us a turn six Licia, which isn't great but it's something.

Gonti's Machinations (134 decks) is underplayed in my opinion. Maybe there just aren't that many lifegain decks being made these days. However, if our opponents cooperate and damage us a couple times in the early game, then turn one Gonti's Machinations, turn two Lightning Greaves, turn three hasty Licia.

Tavern Swindler (73 decks) is risky but doesn't require mana to activate the ability. If you just looked at the art, you'd probably think she was a vampire too.

Some more commonly used cards include Subversion and Agent of Masks to give us three life in our upkeep; the Seek side of Hide // Seek at two mana for potentially so much more lifegain; and Venser's Journal, if we have cards in our hand. Brion Stoutarm has lifelink, and since he's the one doing the damage, his Fling ability for a single red mana also has lifelink.

Planeswalker abilities do not cost any mana that we would otherwise want to use to pay for Licia. Ajani Vengeant, Ob Nixilis of the Black Oath, and Elspeth Tirel all have abilities that can add three or more life to our total, as well as the newly revealed Ixalan planeswalker Huatli, Warrior Poet.

Mechanically, Licia is perhaps the best commander so far for an Eldrazi horror meld themed deck. I'm using Hanweir Battlements as a haste enabler for Licia, and I'm also using Gisela, the Broken Blade since she's a mana-efficient flyer in Licia's first strike lifelink club. Lone Rider/It That Rides as One is also a member of that club that benefits from what a Licia deck wants to do. Since I'm already halfway to having the two strongest meld creatures, Brisela, Voice of Nightmares and Hanweir, the Writhing Township, it might be worth it to save a couple card slots to make that possible. However, we would need more card slots than just the other halves of those melds, since a meld deck without tutors is an anticlimactic experience. Luckily, access to black gives us all the tutors we need.