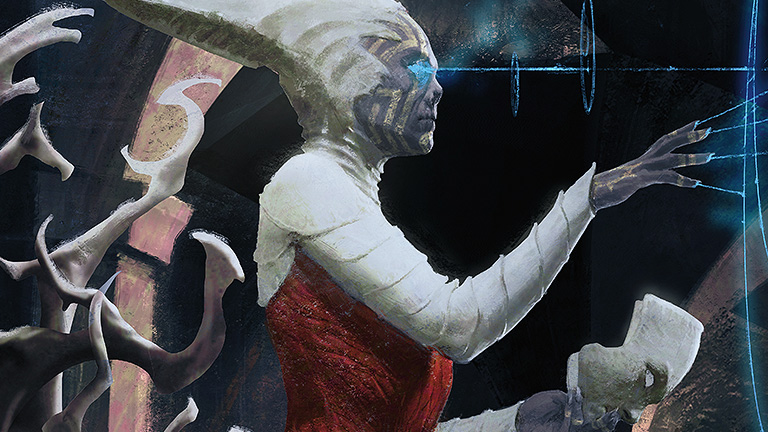 It's been a long, long time since Mon Mothma received the nano-immortality treatments. Every once in a while, she has to take the augmented reality mask off of the gilded thaumetallic contacts in her face to ease the overload of thought conductivity along the supercomputing fiber woven into her hair. It took a few decades for the research department to get the helmet balance correct, but the reinforced spine helps. So does good posture. Varina, Lich Queen is a Zombie that has the word "Zombie" two times in her text, which meets the qualifications for a Zombie tribal commander. If you have a bunch of Zombies and attack with them, Varina makes a lot more stuff happen. In a pinch, she can also turn excess mana and cards in your graveyard into new Zombies, preferably sometime around the end step of the player just before you.

This step has the most flexibility and nuance in the execution. I'll go over this in more detail later, but most plans for getting Zombies will either include lots of actual Zombie creature cards or focus on a few various ways to make lots of Zombie tokens. Most Varina decks will be trying to find a strategic maxima somewhere in between those two plans.

Until you have achieved Step 1 ("Get Zombies"), there isn't much reason to try to skip to Step 2. Much like Edgar Markov hiding in the command zone waiting for a critical mass of Vampires, we shouldn't see Varina on the board until there is already a squad of Zombies ready to attack.

Since Varina's profit is based on the number of Zombies we use, each of them is precious. We could add some cheap support to help them survive with things like Reconnaissance, Dolmen Gate, or Inner Sanctum, for example. Try to have at least one card in your hand when doing Step 3.

If you have already achieved steps 1, 2, and 3, then this is where Varina can draw lots of cards, discard lots of cards, and gain lots of life. The quantification of "lots" in this case depends on how many Zombies you invited to the party. Like Edgar Markov, quantity of minions can be more important than their quality. There are many juicy ways we can take advantage of this profit, but if we include too many cards to do that then we won't have enough cards to complete Step 1 ("Get Zombies").

If you have at least one card in your hand when Varina's triggers activate, then you get to keep the best card(s) out of what Varina draws before you discard. If you have zero cards, then Varina is effectively just milling your library but with additional draw and discard and life gain triggers. Speaking of which...

Diviner's Wand is interesting since Varina happens to be a Wizard. With enough Zombies, that equipment could make her an effective Voltron commander. Keep the list of enchantments in mind, since they may fit into some complimentary strategies later.

Not all of this list is relevant to Varina, but there is enough here to make it tempting to finally build an Esper enchantment deck that doesn't use Zur the Enchanter. This time I'll skip the mini deck list and just point out Archfiend of Ifnir, Faith of the Devoted, and Drake Haven. The Archfiend turns Step 4 into a one-sided creature board wipe right before any blockers would be declared. Faith of the Devoted is probably suboptimal unless you have literally nothing else to do with your mana, and if you just drew a lot of cards then you should probably save your mana to cast one of them. Drake Haven could be a useful way to burn mana if we need some flying creature tokens. To fake out anyone who just skims while scrolling and didn't read the text of this paragraph, here are a couple pictures of cards that are worse versions of the cards discussed above. Taking advantage of lifegain is already a well-established theme that is beyond the scope of this article. Oloro, Ageless Ascetic and Karlov of the Ghost Council can give plenty of advice on that subject since they've been doing it for years. There's even a set of Oloro Zombie tribal decks in the database, so if you want to spend the absolute minimum effort at deck building for Varina, that's a good place to start.

Now that we have covered the overall steps, let's back up and zero in on perhaps the most important step that is a prerequisite to all the others: Get Zombies.

Typical win conditions include Coat of Arms or enough Zombies with +1/+1 effects on your other Zombies to be close to the same thing.

If you want a bunch of searches to throw at Scryfall, then last year's article on Edgar Markov is still relevant. Just use the searches listed there but make it Esper instead of Mardu and replace the word "Vampire" with "Zombie". "Other" and "Zombie". "When" and "Zombie". "Zombie" and "you control". "Each" and "Zombie".

An easier method might be to check out the four-color Zombie tribal deck in last year's article about Kraum, Ludevic's Opus. Then just cut out the red cards. If you want more focus on black, there's also a podcast that talks about a Josu Vess, Lich Knight zombie tribal build. Finding good Zombie creature cards is probably the easiest deck building plan, since there are so many of them. According to our statistics, Zombies are the most popular tribe for tribal decks, so it's not like this path is uncharted deck building territory.

If you use a free hand with Varina's discard trigger, then you can fill your own graveyard with creature cards for an impactful Living Death, Patriarch's Bidding, or other mass-reanimation effect. If Wayward Servant happens to be in there and drains your opponents for each Zombie when they all come back, then that's another potential win condition (or win helper). This plan has the most variety, but is also perhaps the most brittle as the big plays in this category rely on a few specific cards.

This overlaps with Plan A and is a solid resilient choice. Popular picks include Cemetery Reaper, Lich Lord of Unx, and Noosegraf Mob. Since Varina already plans on discarding cards, perhaps Skirk Ridge Exhumer is not as penalizing as usual.

Grave Titan is the big standby. The Amonkhet mechanics Embalm and Eternalize are technically relevant here, and make creatures easier for Varina to discard if they have their own way back to the battlefield. The morbid types such as Kalitas, Traitor of Ghet and Overseer of the Damned could be effective if the rest of the deck includes enough creature removal to activate their triggers. Otherwise, their performance will be disappointing. Since quantity of Zombies is more important than their quality here, Ghoulcaller Gisa might be more effective than her brother Stitcher Geralf.

If the deck is heavy enough in instants and sorceries to qualify as what I call "Primal Amulet tribal," then perhaps there are enough low-mana-cost instants to include Isochron Scepter, possibly imprinted with Vile Rebirth. Varina is a Queen, and Queens need their scepters. In the mid-game, Army of the Damned can be a win condition. In the late game, it's Rise From The Tides. Monarch is on-theme for a Queen

Undead Alchemist is the key player here, along with Dread Summons. Using the blue "whenever you draw" enchantments listed way back in Step 4.1, your card draw can be directly converted into milling their cards, which is then converted into Zombie tokens. Necromancer's Covenant works well with this strategy, as it can be done long after the milling (or board wipe) has happened. On a related note, here's a link to The Scarab God Mill Theme page.

This pipe dream practically relies on tutoring for Waste Not, since there isn't really any other card that does what that card can do. If we have a tap-able Jace's Archivist right before our turn starts, then we wheel into a ready Zombie party. Most wheel effects in blue and black are sorcery speed, but with the right Leyline or Orrery, that issue can be circumvented. However, once Waste Not is on the board then this tactic is no longer secretive or subtle and your opponents will probably see it coming.

Lastly, there are Liliana planeswalkers that do Zombie things and even a relevant enchantment or two with her name on it.

Instead of doing the obvious things, here's an alternative.

This deck is going with Plan C, which involves making lots of creatures of any subtype, then hacking them to be Zombies with Arcane Adaptation or Xenograft. Listeners of my podcast about Yuriko, the Tiger's Shadow may remember how I also used Conspiracy as well to make her team into Ninjas. Sadly, Conspiracy replaces all creature types instead of adding a new one, which gets awkward since the rest of this particular deck cares about other creature types as well. Instead, we can add Mirror Entity in white, which adds all creature types (including Zombie) to our creatures, and becomes a win condition through regular combat with enough mana and a wide enough team.

The gameplay may not be as straightforward as Plans A or B, and in fact this combo deck will look like it's doing nothing... right up to the point where it does everything. This is a bare bones list to better highlight the key cards in this strategy, and I left room for replacements. If you feel like you're missing Swords to Plowshares, Path to Exile, Cyclonic Rift, or your five favorite tutors, there is room to cut down a few of the weenies and swap in your pets. Add multicolor lands as your budget allows.

Unless your opponents read my articles, they probably won't expect Varina to be doing what this deck delivers. For example, I could add Liliana's Contract to get multiple paths to yet another win condition. Enjoy!