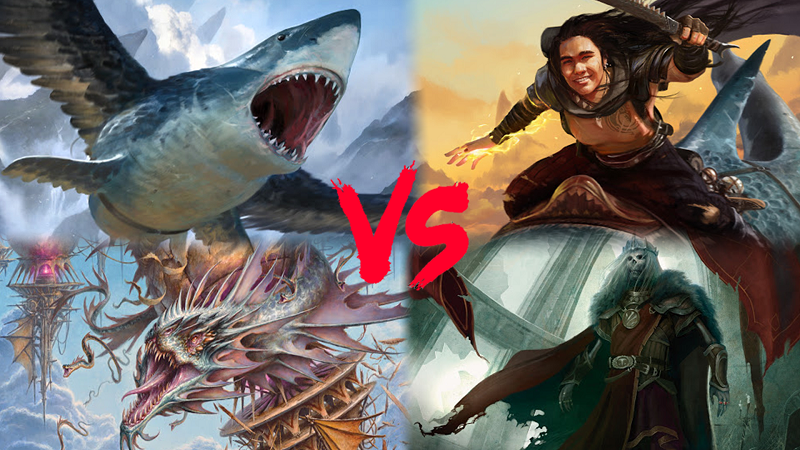 Commander 2020 and Ikoria: Lair of Behemoths are already making enormous waves in the format, and nowhere is that more apparent than in the renewed importance of wheel effects. Our format has been home to many delightful commanders that love to take advantage of a good ol' Wheel of Fortune or Windfall, from The Locust God to Kydele, Chosen of Kruphix pairs, and, of course, the famous Nekusar, the Mindrazer.

Wheels definitely have solid footing in red-blue, but Commander 2020 has ushered in not one but two more commanders that love these wheels: Xyris, the Writhing Storm and Brallin, Skyshark Rider + Shabraz, the Skyshark. And this is to say nothing of Rielle, the Everwise!

For this week's Commander Showdown, we'll focus our attention on the three-color wheel decks. How does this classic strategy play out when red and blue are joined by Nekusar's black? How does that change when Shabraz exchanges black for white? Or when Xyris adds a twist of green? What will these decks have in common, and which cards make them stand out from their peers?

There's a lot to get to, so let's waste no more time and let's get these wheels spinning!

First up is Nekusar, the Mindrazer, one of the founders of the archetype.

I'll keep this section brief, because I suspect many are here to read about Sharkbait. Nekusar is well-known and well-documented, so we needn't delve into his card choices too intensely.

Rather, I think Nekusar's most important lesson is his deck's psychology. When one person plays a Blightsteel Colossus, we have no clue who they're planning to attack. We might sandbag removal in case that Colossus attacks our enemies first, and only take out the big threat when it starts heading in our direction. Individual threats may live for several rounds as players suss out where that damage is headed.

Nekusar doesn't have this luxury. He deals AOE damage, which means he's going to tick everyone off, and no one will want him to live. While cards like Fate Unraveler and Spiteful Visions read like they will gradually whittle life totals away, a Nekusar player won't survive a long game because their enemies will be too peeved.

Nekusar is part of a grand flourish - deploy a chain of wheels all at once to take the table out quickly, rather than gradually, and you'll ensure your own best chance at survival and victory.

Card to Consider: Vile Consumption. A bit of a left hook here, but I think it's a necessary piece of the Mindrazer vocabulary. If people are going to come after you for pinging them so consistently, one of the best ways to stay alive is to punish them for even trying it in the first place. This, Pendrell Mists, and other forms of removal can stave off the pain long enough to establish a lethal cycle of punishing enchantments and set up for a huge turn that's basically a big wheel of death.

Onto the new. Jeskai's Cycling deck produced a pair of wheely good commanders: Shabraz, the Skyshark and Brallin, Skyshark Rider, which prompts Magic players everywhere to now use the phrase, "Screw you and the Skyshark you rode in on."

Cycling is nice for these commanders, but honestly seems to hold them back. Brallin pumps out damage extremely quickly, and both he and Shabraz can grow to enormous heights with just two spells.

That said, I think it would be faulty logic to assume that we'll be allowed to keep both of these cards in play at the same time. I play a lot of Partner decks, and not only is it rare to get them both in play, it's also usually unwise. These commanders are both win conditions unto themselves, so we only need one in play at a time to avoid ramping up too much command tax. We can therefore mold our gameplan, and the priority of our Partners, around the types of spells we've drawn or the enemies we're facing. A lot of Whirlpool Warriors or Winds of Changes in hand? Start off with Shabraz to Voltron down an enemy lifegain deck. Manage to get the discard-based wheels, like Tolarian Winds? Brallin can be our starter, and Shark buddy can clean up afterward.

Oh, and there's also the matter of Brallin, Skyshark Rider going full-on Niv-Mizzet, Parun. Slap an Ophidian Eye or Curiosity down, ping a bunch of players, draw cards for each damage, and move to the end step. Discard to hand size, lather, rinse, and repeat. Seems dece!

I think the main lesson to take from Shabrallin is how they approach the wheels theme with a fresh sense of versatility. Nekusar, the Mindrazer is very single-minded, and many of his support cards follow in almost his exact footsteps, such as Fate Unraveler. He leads a very dedicated deck, which allows him to commit to it very strongly, but if you'd like to vary your win conditions, that's a twist that Sharksky and Hutch can provide, as they turn wheels into ping damage, Voltron buffs, Locusty tokens, and even let you flex a bit on whether you'd prefer to focus on drawing or discarding at any given time.

Below is what I'd look for in an optimized Shabraz + Brallin deck, but I'm intrigued to hear from you all about some fun new cards to try with these fly fishers.

Card to Consider: Boros Charm. White is really just a teeny tiny splash in this deck, but if my main lesson for this pair is versatility, then I absolutely must discuss the Charm. Protect your stuff, or give one of your big beefy commanders the ability to one-shot an opponent from out of nowhere? That's what's up.

Xyris, the Writhing Storm has taken off in the wake of C20. Folks were definitely hungry for new Temur commanders, because he and Kalamax, the Stormsire have put up the most consistent numbers on EDHREC so far, showing up among the top three most popular commanders from the set. This is particularly impressive because, with the exception of Sevinne, the Chronoclasm, secondary commanders rarely eclipse the face commander on the front of the box. Well done, Xyris!

The easiest mental comparison to make for Xyris is The Locust God, but the math here is, it turns out, quite wrong. Where a single Windfall might net you seven Locusts, Xyris will present you with 21 Snakes.

I've been told I'm sleeping on the power of Winota, Joiner of Forces, which may indeed be true, but when I see a commander that can produce double-digit numbers of tokens through the simple expedite of casting one three-mana sorcery, it makes me feel like every yard gained for Boros is two more gained for green and blue.

Naturally, we're Commander players, so we're not content with simply creating 21 Snake tokens and attacking with them. That's absurdly powerful, obviously, but we need to do more. We need some ways to make those already-lethal Snakes even more lethal!

Let a Purphoros, God of the Forge and an Impact Tremors turn those tokens lethal the second they hit the field. Land a Fires of Yavimaya or a Fervor to follow it up with an instant attack, and use a Shared Animosity or a Beastmaster Ascension to laugh your way to the bank. As if that wasn't enough, sacrifice everything after combat to a Goblin Bombardment to seal the deal.

Green largely serves to facilitate the wheel strategy in the same manner as a Kydele, Chosen of Kruphix, largely by fixing up the deck's mana production. It ramps with the usual suspects like Farseek and friends, but also drops in a few nice cards like Cryptolith Rite. I'm also a particular fan of Burgeoning here, which is stronger in wheel decks than it is in Landfall decks since wheels refill the hand enough to regularly prompt Burgeoning's ability. After the mana help, green can also be a slight source of pump. Some decks on EDHREC so far have opted for cards like Seshiro the Anointed, since it buffs the Snakes, but I think we have cheaper methods of making our army lethal.

More on that in a moment, though. For now, let's take a look at a potential Xyris list:

Card to Consider: I wanted to put a green card here, but the card I simply must call out is Throne of the God-Pharaoh. These tokens are a lethal force even without a big buff. We could busy ourselves with Triumph of the Hordes if we really wanted to, but I'm a bigger fan of the cards we can cast before Xyris hits play.

That was kind of a lot, so here are some summary notes on our three three-color wheel'n'dealers:

Nekusar, the Mindrazer's wheel strategy requires him to weigh enemy psychology. He can't take it slow and steady, or the entire table will point their daggers his way. This means Nekusar doubles down and dedicates firmly to the painful draws, often ending the game with a huge flurry of draws and discards that will melt a life total faster than you can say "Wait, I take how much damage!?" The strategy is powerful, but it's a very defensive deck until it's ready to pull the trigger. If you like the classic trope of plotting an ultimate master plan, this classic wheel strategy can do you no wrong.

Shabraz, the Skyshark and Brallin, Skyshark Rider are all about versatility. They don't work in tandem so much as the help you shift your strategy to accommodate any type of opposition you encounter. They might defeat Opponent 1 with tokens, Opponent 2 with commander damage, and Opponent 3 with an Infinite Brallin combo. This is probably the deck to try if you like thinking on your feet (or on your fins, I guess) and truly spinning the wheel to find out what type of game you'll get.

Finally, Xyris, the Writhing Storm's deck truly rewards preparation. If you've laid the groundwork for Xyris's arrival, your first wheel will be lethal in a matter of seconds. Get a lot of lands, plop down an Ogre Battledriver and an Outpost Siege, cast Xyris into Molten Psyche, and your enemies are in deep trouble. It's less about chaining multiple wheels together, a la Nekusar, and more about setting the stage so that when the storm hits, it's not just a drizzle, but a full-on hurricane.

So, which of these wheely commanders do you prefer most? And how do you think they compare to the two- and four-color wheelers out there? I'd love to hear your thoughts in the comments below!

And of course, we've got a whole new set of commanders on our hands, so don't forget to vote for the next Commander Showdown to let me know which pairing you'd like to see next! (Suggestions for other match-ups are always welcome!)