Competitive Nature — Rafiq of the Many 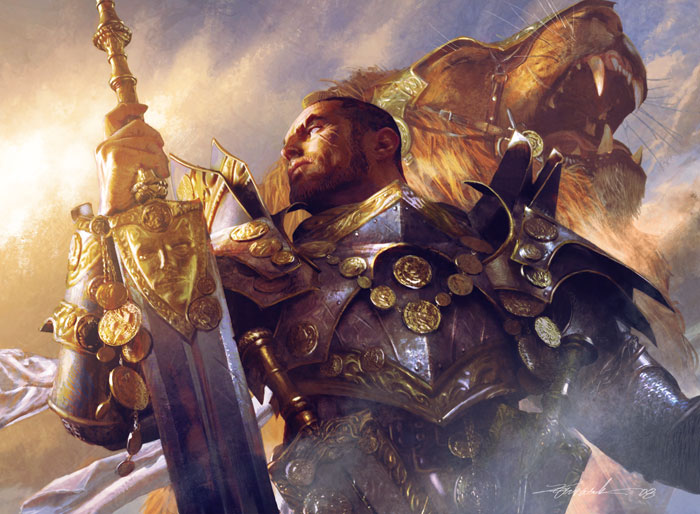 Welcome back! This week, we look to beef up another “average” deck to make it more competitive. EDH offers several different avenues to attack. Last time, we looked at Karador, Ghost Chieftain where the objective was to quickly assemble a combo that leveraged our graveyard and kill all our opponents in one continuous loop. The deck played grindy, value-based creatures and spells that contributed to the overall goal. This time, we take a different route to bring death to our enemies.

Today we look at Rafiq of the Many. Rafiq is not known as a fun general to play against, because he hits hard and fast, and usually takes someone out by the fourth or fifth turn. As always, there are a few different directions that you can take, but we will focus on a Voltron-style build, aiming to create a giant, unkillable, unblockable monster out of Rafiq, similar to hexproof strategies commonly found in Modern or Standard decks of yesteryear.

Again, this deck is good and does some powerful things, but I believe it plays a longer game than Rafiq wants. You’re will get hated on for playing Rafiq — in no world does anyone cast Rafiq, untap, and then offer to play a game of tiddlywinks. Your playgroup will instinctively target you as soon as you get anything going, simply because once the train starts rolling, you’re probably going to kill someone (likely the person most capable of slowing you down). There are some cards in this list that are good in concept, but that don’t effectively leverage the deck's other synergies that you want to put together.

Let’s break this list down, section by section, and see how we can build upon it and make it better.

The Wrong Side of the Tracks

Rafiq is all about speed, so your best starts are going to involve accelerants on turns 1 and 2, ideally to allow you to cast Rafiq ahead of schedule and start attacking. Therefore, the current land base has too many slower lands that can lead awkward starts. Similarly to Karador, the easy cuts are on the lands that enter tapped. Tapped lands are too much of a tempo hit given how important it is to have a timely curve of spells. Additionally, Rafiq is fairly mana intensive since a majority of our spells have multi-colored casting costs. This necessitates adding more lands that can tap for different colors. Flexibility can be the difference between hitting someone for lethal commander damage and leaving them around another turn to potentially remove our threats.

As for creatures, here’s the current lineup:

Going with our previous theme of creature accelerants, let's add a few more to the mix. Avacyn's Pilgrim, Bloom Tender, and Sylvan Caryatid can accelerate our strategies in the early turns. When we evaluate our opening hands, in addition to functioning mana, one of the first things we should look for is a mana dork to allow us to bypass the early turns and generate faster mana. To add these cards in, some of the cuts I make are the dorky exalted creatures, mostly the otherwise vanilla two drops. Knight of Glory, Sigiled Paladin, and Ethercaste Knight are low impact. Sure, they provide an exalted trigger (great when attacking with Rafiq) but they are too vulnerable to removal and they don't offer much on their own. Our objective here is to kill them with Rafiq — losing other creatures to wrath effects when those creatures could’ve been other equipment or auras (which inevitably deal much more damage) can be the difference between sweet victory and bitter defeat.

In this style of deck, we can appear to be very “all-in,” meaning that if our primary route to victory is stopped, we generally lose. This is fairly true because if they reliably find a way to remove or curtail Rafiq, the deck is in trouble. However, we can create additional avenues that let us regain some steam. Therefore, I added a small “enchantress” package as a means to generate card advantage. Argothian Enchantress and Verduran Enchantress allows us to draw cards off of our auras and enchantments. It’s very hard to beat a deck that is creating a giant monster as well as drawing more gas to grow that threat even larger, and if we fear removal, we can simply hold back on some of our more important threats to draw out the removal and then start right back up again when the coast is clear. I cut Cold-Eyed Selkie and Battlegrace Angel. The selkie does not seem as obvious initially since I just finished talking about how great it is to draw cards. What gives? Well, it’s a bit counter-intuitive, but stick with me. This deck wants any combat boosts going onto Rafiq, and pretty much Rafiq only. Boosting the selkie to draw more cards, so we can put the cards that we draw onto Rafiq, is trying to do too much too inefficiently. Battlegrace Angel is over-costed for the ability, as the lifelink won’t always be as relevant and five mana is quite a lot for exalted. Similarly, Stoic Angel is a little too low impact. Paying four mana to lock down some creatures is fine, but the angel itself is a too vulnerable to removal, and I’m not dying to protect it with our auras and equipment.

The last few creatures to add are Medomai the Ageless, Bruna, Light of Alabaster, Knight of New Alara, and Dauntless Escort. Medomai combined with Rafiq is insane. Attacking with Medomai when you have Rafiq in play allows you to take two additional turns, since the ability triggers each time Medomai hits. If you have Finest Hour in play, you get four additional turns. You almost have to try to lose the game when you get four straight attack phases!

However, sometimes Rafiq just isn’t going to get there on his own. It sucks, but it happens. Bruna is plan B. She quickly grows out of control with her abilities, and she is a gigantic threat all on her own. Dauntless Escort and Knight of New Alara allow us some utility, since the knight grants Rafiq +3/+3 on his own in addition to pumping some of our other threats like Bruna and Medomai, while the Escort can protect all of our creatures from wrath effects.

Here's where we are with the changes:

Moving forward, I am going to lump the artifacts and enchantments together, since they serve similar roles in this deck. The equipment and auras are critical to assembling our Rafiq war machine. While he is powerful on his own, he needs buffing so he can outright kill one (or two) players in a single attack step.

This is arguably the most important section of the deck. We need our pump spells to be efficient and effective in order to boost Rafiq into a lethal threat while our auras or equipment protect him in some fashion (indestructibility, hexproof, etc.). Furthermore, we need to have slightly more auras than equipment to better leverage the enchantress package as well as Sovereigns of Lost Alara.

The cards that jump out to me right away are Chromatic Lantern, Swiftfoot Boots, Angelic Benediction, Ardent Plea, Oblivion Ring, and Rhystic Study. Now, aside from Angelic Benediction and Ardent Plea, these cards are format all-stars. They are effective in what they do, but that is the main reason why I would cut them. Since we are committing to a voltron strategy, we need to make sure that all of our cards are designed to complement that game plan. I replaced these cards with auras that can be tutored using Open the Armory and Sovereigns, and, in the case of Rhystic Study, I replaced that with Sylvan Library, a more selective form of card advantage that works particularly well with our fetch lands.

Note that the cards I added do the things that I mentioned; they protect (protection from all colors, totem armor, hexproof), buff, and are efficient. They are under-costed, and, in the case of Bear Umbra, allow us to get double use out of our mana both pre and post combat.

Finally, lets take a look at the instants and sorceries:

There isn’t much to worry about here since there are solid tutors (Open the Armory, Enlightened Tutor), good removal (Krosan Grip and Path to Exile), and some ramp (Cultivate, Kodama’s Reach). However, I would cut Wargate, Bant Charm, and Sylvan Reclamation, and replace Disallow with Negate. Basically all of the answers to what we are trying to do and how people are going to stop us will come in the form of non-creature spells, so having a cheap answer in the form of Negate works. Wargate is slow, and a bit over-costed as a tutor effect. If it were an instant, I could definitely get behind it, but a five or six mana sorcery to find one of our equipment or auras is a little rough. Reclamation has value, and it does cycle for lands, but out of all these cards, Reclamation comes off as the weakest. Bant Charm has a lot of utility, but it can be narrow and difficult to cast at times. I like the counter mode the best, but there are better cards that can be used in it’s slot.

With the changes, we’re here:

Bringing it All Together

All said and done, here is what we end up with:

I believe that, while the original list was decent, this new deck is more streamlined. We trimmed some of the “cuter” cards, and mostly ditched the exalted sub-theme for a more consistent enchantress theme. Normally, “hexproof” style decks, such as GW Hexproof in Modern tend to be a glass cannon, since you run out of gas or threats a fair amount of the time. Since our best threat is our commander, we are always able to cast a threat and follow up with some more pressure in the form of evasion or protection. As for playing the deck, don’t try to be too political. When you are able to kill someone, kill him or her. Less players at the table means that there are less people who can stop what you are doing. If you can take out two people, obviously take out the person that looks like the biggest threat or in the best position to stop you.

Thanks for reading! Please feel free to give me your thoughts in the comments, and any ideas for my next deck to remake are more than welcome.

Neil is no stranger to to competition. He enjoys the challenges of winning and approaching metagames. He can most often be found in the corner of his LGS, sacrificing his creatures for value and comboing off.

#bant, #competitive, #enchantments, #enchantress, #rafiq of the many, #voltron