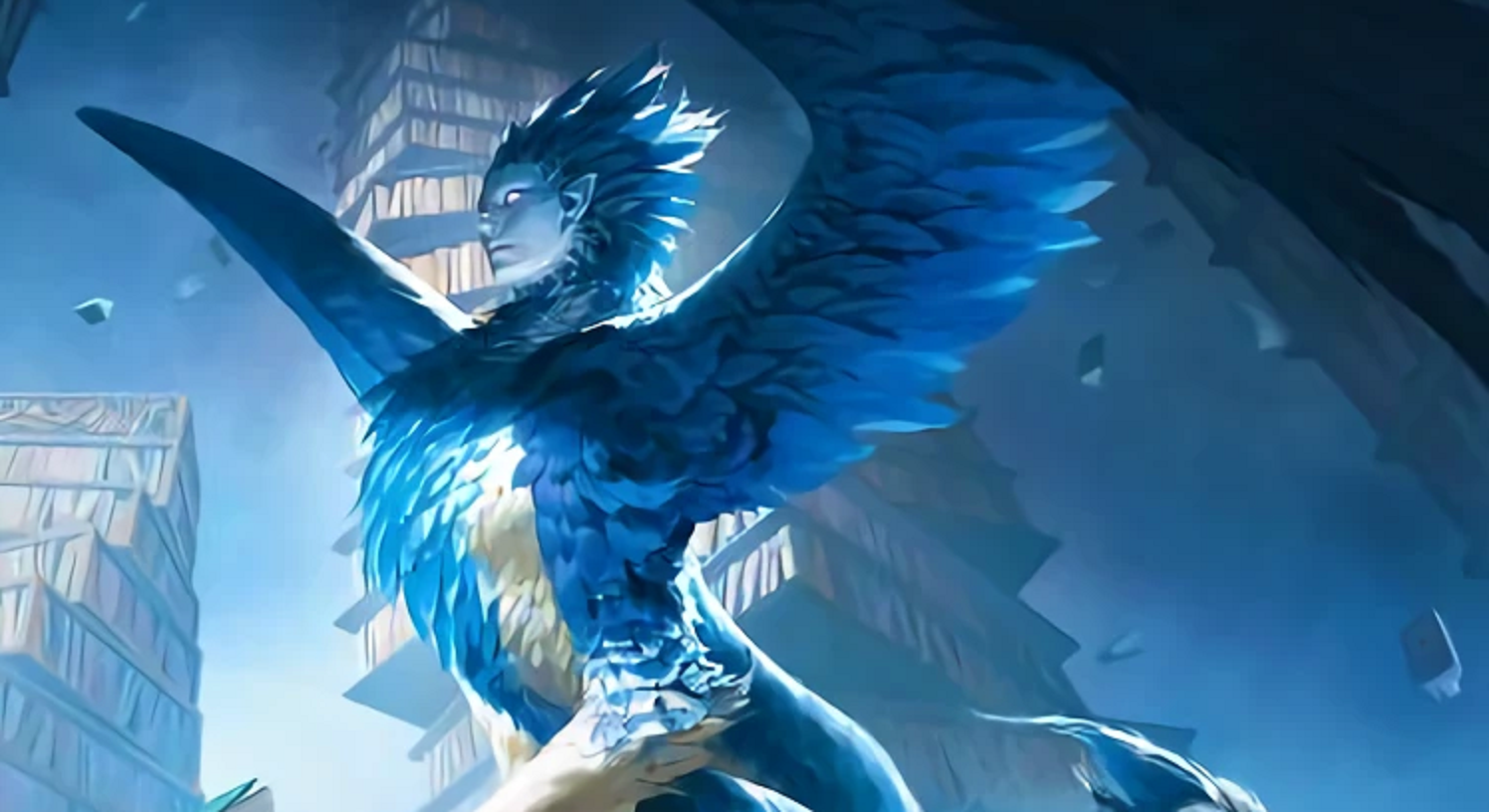 Hello everyone, welcome back to Conditions Allow. This is the series where I pick a legendary creature with a drawback, and try to turn it into a strength. There have been a lot of sets released in a very short amount of time. From Ikoria to previews of the new Zendikar Rising, keeping up with all of the new cards has been difficult. There have been lots of new commanders to brew around, and plenty of new cards to slot into old decks. Today, I’m finally diving into Jumpstart to build around one of my favorite legendaries from the set, Ormos, Archive Keeper.

Ormos, Archive Keeper is a tricky commander that asks you to play right on the brink of disaster. It does have a powerful draw ability, letting you discard three unwanted cards with different names to draw five cards, but that isn’t what interests me here. Ormos takes a page from Laboratory Maniac‘s page, and truly shines when you have no cards left in your library. If you would draw a card while there are no cards in your library, instead put five +1/+1 counters on Ormos, Archive Keeper.

This effect can make Ormos very big, very fast, but it also leaves us in a precarious position. If our commander dies, we will most likely lose the game shortly after. Ormos also doesn’t seem like it wants to mill our opponents out, meaning we won’t be drawing any new cards, while our opponents will be. Defending this commander long enough to win could be a challenge. Let’s head over to Ormos’s EDHREC page and see what approach is most popular.

There are two broad categories of effects among the top cards on Ormos, Archive Keeper‘s EDHREC page: card draw, and mill. Drawing extra cards with Teferi’s Ageless Wisdom gets us closer to an empty library. Milling has the same effect, so Dreamborn Muse and Drowned Secrets appear as well. I’m not sure sure about that Sphinx’s Tutelage though, as it can only target our opponents. Ormos wants us to deck out, not our opponents.

To that end, there are also a couple of cards that empty our library in one shot. Enter the Infinite is an expensive but powerful card that draws all but one card from our deck. Leveler costs less mana, and takes a more permanent approach to emptying our library. Still, if we have access to the right cards, it shouldn’t matter if our library is exiled or in our hands.

Most of the rest of the cards are generic blue value spells, with an emphasis on removal and counterspells. Protecting Ormos is important, so this makes sense, but I don’t see very many recursion effects. Self-mill decks usually go forward with the goal of doing something unfair with the cards that end up in the graveyard. This is usually accomplished with Reanimate and other Animate Dead effects. Large graveyards also act as a second ‘hand’ for commanders like Kess, Dissident Mage and Muldrotha the Gravetide, or fuel combos with cards like Necrotic Ooze and Nethroi, Apex of Death.

Looking at Ormos’s page, it seems like that second part is missing. The goal is to mill ourselves, and then win with a huge Ormos, but that won’t often happen that smoothly. Having zero cards isn’t only dangerous because we lose if Ormos is removed, but also because it means we aren’t drawing any new cards while our opponents are. We’re going to need to be able to use the cards in our graveyard to offset this disadvantage.

I actually wasn’t sure what the best way to approach this problem was until I watched this video showcasing a Historic deck on Magic Arena. The goal of this deck is to ramp to six mana, and then control the game with Sublime Epiphany and Shipwreck Dowser. Every time we cast Sublime Epiphany, we’ll have it make a copy of Shipwreck Dowser to return the Epiphany to our hand. This will be the goal of the deck: control the flow of the game to sculpt our hand and graveyard until we are ready to empty our library and push for the win with Ormos, Archive Keeper. I’m also going to add more cards that make use of our graveyard, since they are sorely missing from Ormos’s EDHREC page.

One major weakness of this strategy is the amount of mana it requires. Sublime Epiphany is a six-mana spell, and we need to be able to cast it three or more times per turn. In mono-blue, this means we’re going to need a lot of artifacts. Curving from Arcane Signet into Hedron Archive and Gilded Lotus will let us keep up with the green decks at the table. Basalt Monolith is another key piece of ramp because it combos with Mesmeric Orb to mill our library when we’re ready. The most important piece of our mana puzzle, however, is Unwinding Clock. The colorless Seedborn Muse, Unwinding Clock is a powerful mana engine that is relevant for us at every stage of the game. Early on we can activate Ormos, Archive Keeper‘s ability to churn through our deck, and late game, it’ll ensure we can reliably cast Sublime Epiphany every turn.

Do It Again and Again

Sublime Epiphany isn’t the only way to get extra value out of Archaeomancer. Conjurer’s Closet is a necessity for abusing enter-the-battlefield effects, as is the new Thassa, Deep-Dwelling. Along with getting extra triggers, we can double our triggers with Panharmonicon and Naban, Dean of Iteration. Salvager of Secrets and Shipwreck Dowser are also both Wizards, so Naban will always ensure we are getting two spells back with each token made, or each time one of the original creatures flickers.

With all these triggers, we’re going to need plenty of spells to put back into our hand. We’ll want plenty of backup counterspells, but removal will be key as well. Clearing away blockers with Into the Roil or Reality Shift can be the difference between a swift victory and a slow defeat. Misdirection and Stubborn Denial are also worth shouting out, as they can catch opponents by surprise when they think we are out of mana. Lastly, Sigil Tracer isn’t a spell, but it does let us copy spells. We’ll be accruing Wizard tokens during the game, which the Tracer can use to double the efficacy of our counterspells, removal, and draw spells.

While this deck focuses on recurring instants and sorceries, we want to be able to reuse our other cards as well. Most of the deck is made up of artifacts, so Emry, Lurker of the Loch is a must. Along with lands like Buried Ruin and Academy Ruins, we should be able to get Unwinding Clock back every time it gets destroyed.

There are also several utility creatures we can “cast” from the graveyard. Kederekt Leviathan is a board wipe if we need it, while Vizier of Many Faces deals with opposing threats by copying them. Champion of Wits is great for filtering through our deck early on, and offers not-insignificant card draw later when we need it. For some all-purpose recursion, Codex Shredder is a decent option that can also assist with milling ourselves.

So we have a plan for protecting Ormos, Archive Keeper once our library is empty, and we can use the cards we mill along the way. But how are we actually going to empty that library? There are plenty of good options, some of which I’ve already mentioned. Drowned Secrets and Jace’s Erasure will get us there eventually, while Enter the Infinite pretty much does the job all at once. Leveler also acts quickly, although we’ll need to be careful that our hand and graveyard contain all the cards we’ll need for the rest of the game before committing to exiling our deck.

I don’t think we need a ton of ways to mill ourselves out, so I’m only going to include two. Leveler is great for its simplicity and mana efficiency. I’m already including Basalt Monolith as a mana source, so Mesmeric Orb is a natural choice as well, forming an insta-mill combo with the Monolith whenever it pays to untap itself! This is really a control deck, and the main strategy of recurring Sublime Epiphany to protect our board will work even if there are still cards left in our library. Plus, there are quite a few ways for mono-blue to search for artifacts.

Speaking of tutors, I want to highlight Vedalken Aethermage and Long-Term Plans. We can obviously find Sublime Epiphany with Mystical Tutor or Merchant Scroll, but the other half of our combo is a creature, which mono-blue has a much harder time searching for. With Vedalken Aethermage any one of our Wizards is just a short cycle away. This could be Archaeomancer if we haven’t found it yet, or it could be Azami, Lady of Scrolls to draw more cards, or Vedalken Archmage to take advantage of the many mana rocks in the deck. Long-Term Plans is an unconditional, instant-speed tutor that puts the card we search for into our library third from the top, instead of directly into our hand. This is often too slow, but Ormos, Archive Keeper‘s activated ability can let us draw that card immediately. Jace, Wielder of Mysteries can do the same if we target ourselves to mill two before drawing.

The final step is adding lands. The more utility lands we can include the better, to ensure we can activate Ormos, Achive Keeper‘s ability as reliably as possible. We have to discard three cards with different names, so getting stuck with a bunch of Islands can be a problem. Of particular note, Cephalid Coliseum is an instant-speed draw effect we can use to power up our commander, Rogue’s Passage ensures we can get in for damage, and Inventors’ Fair is another artifact tutor. I’m also turning half our basics into Snow-Covered Islands to help with the “three cards with different names” requirement.

Ormos, Archive Keeper is a really fun concept that I’m very excited to try out. Playing right on the brink of disaster can be exhilarating, especially when you can do it in new ways. Having no library is often an immediate win condition, and its cool seeing that concept being developed along more generally fun, interactive lines.

But what do you think about Ormos, Archive Keeper. Is it a fun new commander, or a gimmick card that isn’t worth the payoff? If you’ve tried building this deck, what cards would you recommend? Let me know in the comments, and thanks for reading.