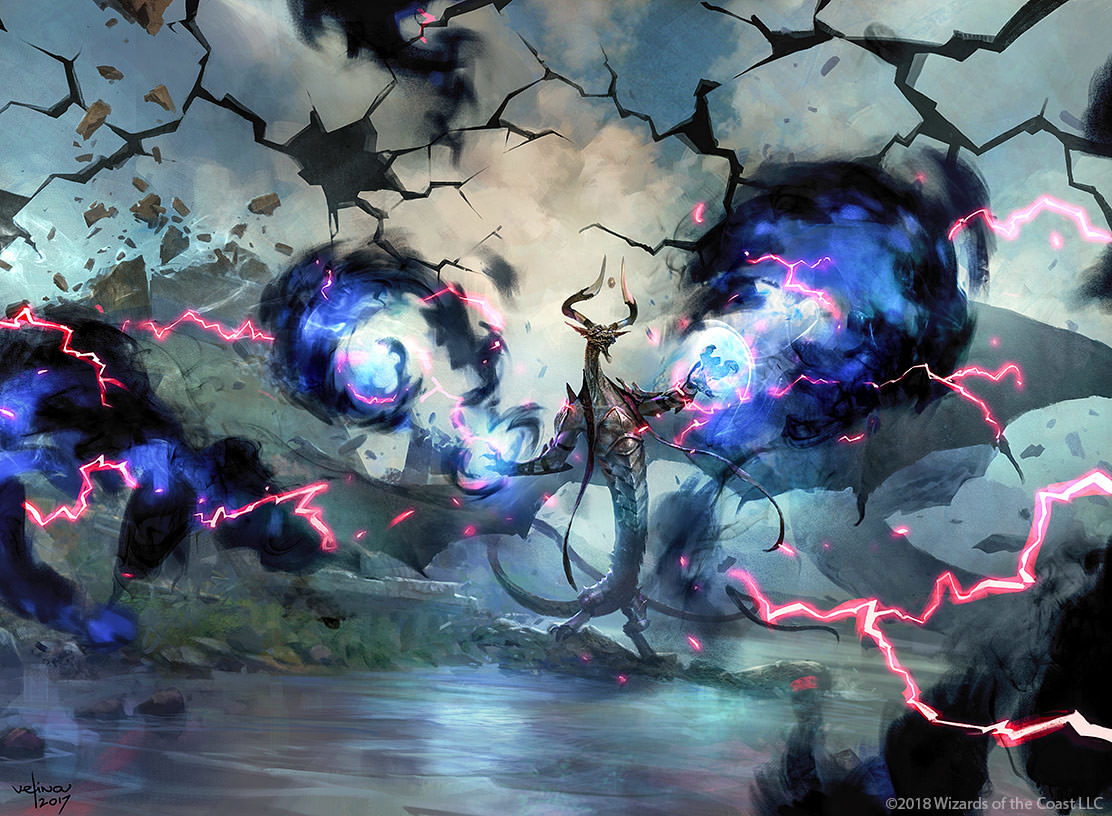 Down to the Core

All hail the return of the Core Set! Historically, core sets have not been anything exciting for enfranchised players. They may have held a card or two like Cultivate or Urborg, Tomb of Yawgmoth, but those were usually pearls amongst the pig's feet. The last Core Set was Magic Origins, which was wildly popular, as it was just a bit more clever and interesting than most of the preceding Core Sets. It seems that M19 has taken a page out of Origins' playbook because this set is serving up some piping hot reprints and playful new designs that look like they're going to pack a punch. Let's take a look at some of the best cards that Black has to offer us in M19. What a boon to lifegain decks! Nightmare's Thirst seems like a play on Tragic Slip. It works best if you're running cards like Axis of Immortality, Authority of the Consuls, or Gray Merchant of Asphodel. This card is going to have no problem removing indestructible creatures, creatures that Regenerate (yes, people still run those), or almost anything else that gets in its way. If your Black/X commander gains life, even with a little lifelink, think about dropping a Doom Blade or something and swapping this in its place.

Oloro, Ageless Ascetic and Elenda, the Dusk Rose both run lifegain effects and could put cheap removal to good use. Another one-mana, instant-speed black removal spell! Infernal Reckoning is pretty good if there are lots of Eldrazi or artifact creatures in your meta, but apart from that, it might be hard-pressed to make the cut. That's not to say it can't be good in other places; Vela the Night-Clad in particular benefits from Thran Lens, which makes Infernal Reckoning effective against any and all creatures. I think the hoops you have to jump through to make this card good apart from the above two scenarios are a little extreme, though. It might be best to trade this to a Modern player for something a little better in EDH unless you have some very specific parameters you intend to fill with this design. A non-lord version of Cemetery Reaper, Graveyard Marshal is a solid value token generator. He comes down a turn earlier than Reaper and doesn't tap to activate, allowing you to pump all the excess mana that mono-black decks are so good at generating into the creation of a swarming army of undead. This card is going to be awesome in mono-black and two-color Zombie tribal decks. Speaking of Zombies, Isareth the Awakener is the newest mono-black necromancer that pulls corpses out of the graveyard and on to the battlefield. Isareth is really interesting. She has evasion in the form of deathtouch instead of menace, which is a nice flavor win. She reanimates creatures, but she can only reanimate creatures during your combat step. The creature comes back into play before blockers can be declared, so pulling out something like a Fleshbag Marauder can get rid of potential blockers before they have a chance to do anything to Isareth.

The corpse counter Isareth confers to her target is purely a memory aid. Removing the counter won't let the creature die normally, and transferring the counter won't confer the exile replacement quality to another creature. However, the Sedris, Traitor King effect does come in to play with Isareth. If the reanimated creature is flickered, like with Conjurer's Closet, you'll be able to keep the creature, as it is a new game object once Conjurer's Closet brings it back to the battlefield.

Isareth seems great for decks like Vela the Night-Clad, Tymna, the Weaver, and Vitrus the Veiled + Gorm the Great. Death Baron is a solid reprint. This card has been creeping creeping creeping up in price, and a reprint in a Core Set should relieve some of that pressure. It's cool that Death Baron gives +1/+1 and deathtouch to Zombies, but it also gives that to Skeletons. For me, I'm hoping this is a signal that Wizards plans to bring us Skeleton tribal in an upcoming set. Hello there, Return to Return to Ravnica, this could be your big moment.

This card is solid. If you're going undead with a build, drop this in. Deathtouch is pretty underrated in EDH. We don't usually get to look at relatively simple beaters and think, hm, I might have a place for that in a Commander deck or two, but Demon of Catastrophes manages to pull it off. I'm calling this card the little brother of Demon of Death's Gate. You can't cheat this card out on turn two in your Shadownborn Apostles deck the way you can with Demon of Death's Gate, but turn four is plenty early to drop a 6/6 with flample. It's also a sac outlet; even a one-use sorcery speed sac outlet, could either be actively helpful just not set you back much if your deck is tuned to take advantage from the graveyard correctly.

This card is good in a deck with lots of low-CMC creatures that can come back easily like Athreos, God of Passage (even if you aren't running the Shadowborn Apostle tech), or a token spamming commander like Slimefoot, the Stowaway. If I didn't have a general dislike of alternate win conditions I would probably carve out a slot for Liliana's Contract in my Athreos, God of Passage/Shadowborn Apostle deck. Running this in a deck with Arcane Adaptation, Xenograft or Conspiracy is a fine way to close out the game if you enjoy alt wincons. Note that it's a bit tricky to get synergy between this card and Mirror Entity because you need another trigger to respond to during your upkeep or untap steps.

Also, drawing four cards for four life is not a bad deal at all. I could almost see running it just for the card advantage.

This card would be hilarious in Patrick's Demon Tribal deck. Fraying Sanity is my kind of card. It's been awhile since we've seen a Smallpox/Death Cloud-type effect make its way to print, but it was worth the wait. This card is the best kind of wrath, symmetrically attacking each player's life, hand, and permanents. The best thing about this card, as compared to Death Cloud, is that it offers a fixed rate of half of everyone's stuff for just five mana. It doesn't hit lands, but that's okay.

This card is a slam-dunk in decks like Mazirek, Kraul Death Priest. Cards like Ogre Slumlord and Pawn of Ulamog create creature tokens when non-token creatures die already, so what's different about Open the Graves? Well, to start with, it's an enchantment. That means that when a board wipe resolves, your creatures are all going to turn into 2/2 Zombies and Open the Graves will still be on the battlefield to crank out more tokens. Secondly---and this is the really big thing---these tokens are Zombies. With M19 premiering cards like Graveyard Marshal, and the reprint of Death Baron, the amount of zombie tribal toys in this set is incredible. And we're not done yet! The queen of the undead herself, Liliana, Untouched by Death is the planeswalker that Zombie tribal players everywhere have been dreaming of. She can come down and ult immediately if you have a large graveyard and mana to spare. If not, her +1 can put some Zombies in the graveyard for later use while also draining some life from your opponents. Her -2 is reminiscent of Liliana of the Dark Realms second ability, a solid -X/-X tied to the number of a particular type of permanent you control - in this case, Zombies. Liliana, Untouched by Death is an instant staple for Zombie decks.

Put her in Ghoulcaller Gisa, Grim-Grin, Corpseborn, or play her in Josu Vess, Lich Knight if you're into irony and like good value. Bone Dragon is, I think, the Champion of Stray Souls of M19. It looks interesting, or even powerful at first blush, but I think the cost of repeatedly bringing it back is going to be clunky in function. Ideally, your graveyard is a resource in a black deck, and this card burns through that resource with little return. I think Demon of Catastrophes is the superior card here. Scourge of Nel Toth is another better pick if you're looking for a self-reanimating undead Dragon.

I figured a Liliana/Zombie tribal brew showcasing some of the above cards made the most sense for today's action segment. It's got some traditional Zombie loops like Plague Belcher, Gravecrawler, and Phyrexian Altar, but should also just be able to bring it with a relentless beatdown given the sheer number of lords and token producers. I hope you've enjoyed this look at M19's new black cards, and please let me know what you think of the new set in the comments below!