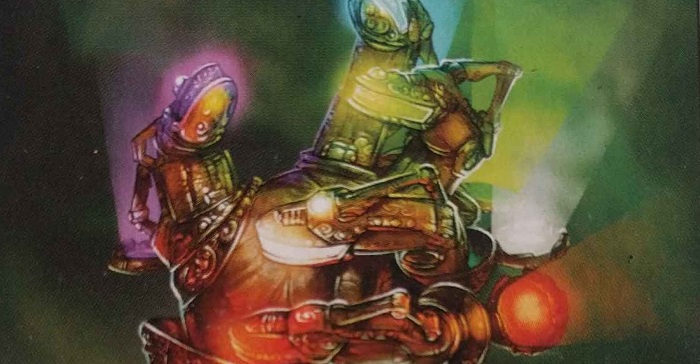 Bring Balance to the Multiverse

Hi there! My name’s Amos, and I’ve been tossing together tenuously viable stacks of expensive cardboard since 2015. My two favorite parts of Magic have always been dreaming up whacked-out deck builds and figuring out flavorful card synergies. In Mark Rosewater’s terms, I’m very much a Johnny/Vorthos, which will make a lot of sense once I explain the premise of this series.

Welcome to Diabolic Intent, where we build decks around pop culture villains. We’ll start with some signature cards that represent the villain’s “master plan” and some of their minions, culminating in an absurdly janky but intensely flavorful combo. Using shared cards in their EDHREC pages, we’ll then flesh out the rest of the deck with appropriate strategies, wacky or otherwise.

Let’s start this series with a villain we’ve seen a lot of in the past couple years—Thanos! If you’ve never heard of the Mad Titan (no judgment, the rent under that rock must be great), his evil plan harnessed the power of the six Infinity Stones (Reality, Time, Mind, Soul, Space, and Power) to eliminate half of all life in the universe. And (spoiler alert) he did it with a gauntlet that looked kinda like this:

While we obviously can’t run this in the command zone, we do have our very own Iron Man garage gauntlet in the form of:

Look at that, an Infinity Gauntlet in the command zone! Jodah is a very popular commander, mainly because he’s the poster boy for generic five-color goodstuff. Never fear, we’ve got some extreme jank planned for him later in our Infinity Gauntlet Combo.

But even before the Mighty Mitt gets assembled, we have plenty of other spells that can bring balance to the universe:

Jodah can let us cast Curse of the Cabal for half its cost, though it only lets us bring salvation to one of our opponents. Vona’s Hunger is better, but Fraying Omnipotence really shows your opponents that the hardest choices require the strongest wills.

Additionally, where would the Magenta Menace be without his Black Order? The recommended commanders for our three “snap” cards give us a wealth of options that are here to help us keep the universe in check, or just revel in our capacity for righteous slaughter.

Archfiend of Depravity as Ebony Maw

This guy is perfect for keeping your opponents’ board states in balance, and his hover-y menacing vibe makes him a great flavor fit.

Our Corvus stand-in can appropriately only deal with one blasphemer at a time, but he gets stronger the more he and his friends do so.

Her triggered ability is even better than Thraximundar’s, plus she can make Fraying Omnipotence hurt us much less.

Kresh the Bloodbraided as Cull Obsidian

It’s the big guy. This guy gets big. Pretty straightforward.

Alright, at this point we’ve got a pretty solid enemies-sacrificing-things theme going, so let’s throw in a few more helpers from these cards’ EDHREC pages.

Our pièce de résistance. An eight-piece combo involving Fist of Suns (or Jodah), six infinity stones, and a “snap” of our choosing. Let's look at the stones:

Who better to represent the shifting and molding of reality than this monstrosity? With Fist of Suns, whichever tribe we choose when Morophon enters the battlefield becomes free! Eat your heart out, Rooftop Storm; reality can be whatever we want.

This card gives us knowledge, (like for your mind), specifically knowledge that we might’ve forgotten (like from our graveyard).

Some might tell you that power is something dumb like loyalty, or controlling 35% of the film industry, but I think power is being able to cast any instant or sorcery you want for just three mana.

Ah yes, mana, the lifeblood and soul of Magic. The Soul Stone requires you to sacrifice something you love, like your daughter, or the tempo of a five-mana Adapt cost.

The Space Stone lets you open portals and travel anywhere, which fits pretty well with the flavor of this guy bouncing things to our hand.

This thing’s great at rewinding time, specifically to a time before your creatures were tapped.

And of course we need the snap itself, which in this example will be Curse of the Cabal.

In hand: Archaeomancer, Curse of the Cabal.

This combo doesn’t actually have to eliminate half of all life in the universe. If we don’t want to cast Curse of the Cabal forever to “shred this universe down to its last atom”, we can play something like Blatant Thievery or Cruel Ultimatum if we actually want to, y’know, win the game.

So there’s the combo! It’s big, it’s stupid, it’s flavorful, and it’s probably never gonna happen. With our evil minions and evil plan sorted, let’s take a look at some recommended cards, and see if we can turn this into a semi-functioning deck.

Cards like these show up a lot on the pages for Fist of Suns, Curse of the Cabal and Omnispell Adept. These show up alongside value generators like Ramos, Dragon Engine, Sunbird’s Invocation, and Zendikar Resurgent. In short, real big stuff, and friends that help us cast them. These are kind of a no-brainer with Jodah as the commander.

Most of these cards are pretty self-explanatory, but I’d be remiss if I didn’t call brief attention to good ol' grandpappy Omniscience. Not just because it’s the definitive card for this build, but because it can replace four of the cards in our stupid eight-piece combo. It makes it a lot easier to pull off, but only in the sense that it’s easier to commute to work on a donkey than a chinchilla.

While looking through the mana-dork-saturated data page for the card Intruder Alarm, I realized that if we go with a predominantly creature-based ramp package, it becomes a pseudo Paradox Engine for creature spells. Totally worth it, especially with mass dorkifiers like these:

Worth noting that if you have Jodah and Intruder Alarm on board, plus enough mana dorks to generate WUBRG, all your creature spells are free!

Archaeomancer and Tradewind Rider’s pages share a lot of cards like this. Powerful enters-the-battlefield effects are an easy theme to add, since many of these creatures are already Commander staples. Coiling Oracle and Eternal Witness are excellent cards, especially when we can bounce them and play them again with Crystal Shard or Erratic Portal.

Though these cards usually make up a Flicker strategy, we’ve chosen to focus on bouncing for a very specific reason: there’s a tribe of creatures who would very much love to be bounced, but their prohibitively high mana costs make it impractical without Jodahfication. Coming live from the Blind Eternities, it’s everyone’s favorite waking nightmares: the Eldrazi!

Eldrazi cast triggers are crazy powerful, and repeatedly bouncing them and then recasting them for just WUBRG is... well, maybe 'good' isn’t the right word, but it’ll definitely freak out your opponents. And though it is notoriously degenerate, Annihilator works perfectly with our sacrifice theme! How were we not already running It That Betrays?

Switching gears for a second, I spotted Tidespout Tyrant on Tradewind Rider’s page, and started imagining what shenanigans its effect could enable in this deck. That and Equilibrium are already great for screwing with our opponents, but the ability to bounce our own creatures by playing other creatures lets us pull off some truly magnificent/horrifying jank.

As we learned before, Morophon the Boundless + Jodah = any one creature type is free. If we choose a creature type that two cards in our hand share, these special bouncer boys let us bounce those two cards back and forth forever (or just a bunch of times in the case of Equilibrium)! Choose Human to bounce Eternal Witness and Cloudblazer, Wizard to bounce Archaeomancer and Elite Guardmage, Elf to bounce Reclamation Sage and Coiling Oracle, or screw it, Eldrazi to bounce Desolation Twin and Ulamog, the Infinite Gyre.

(Sidenote: while carefully curating the list of bounceable creatures to make sure they shared enough creature types, I realized that none of these infinite combos actually let you win, so I threw in a Sparkmage Apprentice.)

Zacama, Primal Calamity with Jodah on the field can net infinite mana with the right lands and another creature to bounce. Her damage ability can’t hit players, but she can gain us infinite life and eliminate most of our opponents’ creatures, artifacts, and enchantments, so that should help. Probably.

Finally, if we can independently afford two creatures using only mana dorks, our old friend Intruder Alarm lets us bounce them as many times as we want!

A Few Other Helpers

Throw in some protection for our creatures, a couple removal spells for emergencies, and we’re done!

So there we have it! However, in the words of the Mad Titan, this decklist is finite, its card limit, finite. It needs correction. Which cards are inevitable, which cards would you snap out of existence, and what devious villain's plot should I reconstruct in the next installment of Diabolic Intent?

Amos has been playing Magic since OG Innistrad, where in his first ever draft pack he passed a shiny Grimgrin for a Corpse Lunge. He hails from the icy wastes of Vermont, where he enjoys hunting Warhammer players on his dogsled and watching movies. You can follow his Tweeter at @Byrnenator.