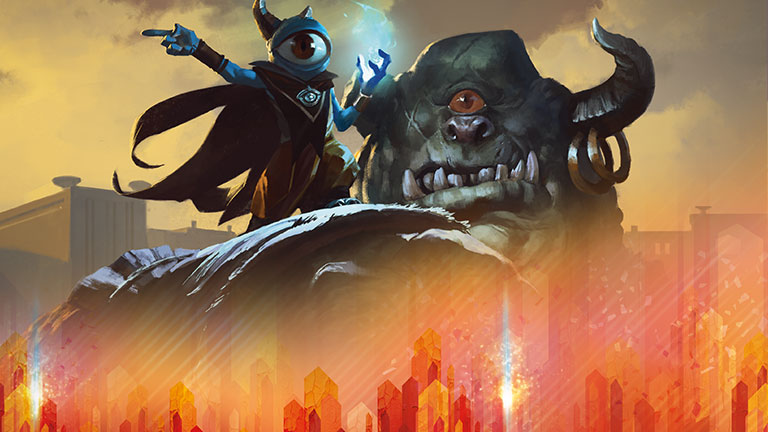 When I first saw Okaun I knew there would be some weirdness in being able to move in for the kill with him, in particular with splashy one-hit kills. This isn't normal for Magic as chance doesn't usually determine life or death, so knowing the odds can really help influence our deck building decisions and play decisions.

In case you haven't really figured Okaun and Zndrsplt yet: at the beginning of combat, they each flip coins until you lose a flip. Zndrsplt draws you cards for each win, while Okaun doubles in power for each win. Since Okaun starts at three power, he can potentially turn into 24 power with four coin flip wins and go in for the one-hit kill. As I will demonstrate shortly, there is a 31% chance that a 21+ commander damage one-hit kill will happen with the partners out together, so other than adding more coin flips (which you probably should do, too) one way to get there faster is to give Okaun some additional power so that he doubles up faster.

Given it's all probability based, I wrote up a simulation that flipped a virtual coin 100,000 times per situation to figure out how to get the best bang for your buck in terms of increasing Okaun's power. Here are the results!

As you can see, there are a couple of important break points highlighted in darker yellow. The first is at +3 power, which increases the one-hit kill chance from a nearly 31% chance to a 50% chance (with Zndrsplt out), which seems pretty big to me. The second breakpoint is at +8 power, increasing the chance from 50% to 75%! +8 is a lot, but I really like my odds at 75% chance of one-hit killing someone. Another thing to note is that there is basically no improvement between +4 power and +7 power, so don't bother.

These breakpoints happen when you need one less winning coin flip to get over 21 commander damage. With Okaun's base 3 power, he needs to get doubled 3 times to get to 21+ power. If Okaun is at 6 to 10 power, we only need two winning flips. If Okaun is at or above 11 power, we only need one winning flip. Of course if he's at 21 power we don't need any flips to knock someone out.

There are quite a few limitations to this analysis, in particular with turns past one. Given how much damage you do on the first turn, what you should do in turn two or three can change the probabilities from above. The ones above just assume you haven't done any damage yet. Also, anything like trample damage over something can mess everything up. So yeah, I'm saying that +5 and +6 aren't any different, but in many situations they probably are incrementally better.

But wait, there are other effects other than just increasing their power which can drastically improve our chances!

One way to increase our chances is to give Okaun double strike with something like Fireshrieker, Blood Mist, Dictate of the Twin Gods, or Berserkers' Onslaught. Double strike or a damage doubler is effectively a single free coin flip win. The results for double striking Okaun are below!

The chart here is a bit different from the earlier one, but the same breakpoints exist at +3 and +8 as expected. However, now +3 gives us a 75% chance to kill with Zndrsplt out, instead of 50%. One thing that's interesting is that giving Okaun double strike without hitting that +3 power doesn't really do much at all.

Holy moly extra combat steps are fun and weird! The crazy thing with an extra combat step is that Zndrsplt and Okaun's flip effects happen once per combat step. That's interesting because Okaun's power in the second combat step will stay at what it was before, and then double again some more! Cards like Aggravated Assault and Seize the Day will do some work here. Here are the results of our chances with a single extra combat step:

Interesting! This one is a bit different in that more power incrementally increases our chances up to +4, giving us a 93% chance to one turn kill with both partners out and an extra combat.

If we build around extra combat spells, we might want to pack in a few more value spells and equipment that could give Okaun +4, like Batterskull. However, I'm not sure how often we'll take advantage of this consistently, so perhaps we should just stick with +3 unless there is other value to be had.

Savage Beating is such an good card here and the stats back it up. Savage Beating entwined will give our creatures double strike and an extra combat step, the best of both worlds!

With just +3 power it'll give Okaun a guaranteed kill (12 damage then 12 damage) but we don't need a simulation to tell us that. However, with no other card other than Savage Beating, we get an 87.5% one-hit kill rate when Zndrsplt is out. That seems like a pretty good opportunity to me! Seeing the +3 threshold again again is interesting and something to keep in mind when building this deck out.

If we learned one thing here, it's that giving Okaun +3 is a good idea, and significantly better than giving it +2 and no different from giving it +5. Double strike, damage doublers, and extra combat spells do good work here as well, significantly increasing our chances of success.

To find some cards in the +3 sweet spot, I decided to search for +3 in our blue/red color identity over at Scryfall. Some cards that stand out as good for me are:

It looks like the deck will be mostly Red to support the +3. I think I'll use Blue to for card draw and some protection but not much else. I'll add in some of the usual suspects like Krark's Thumb, Frenetic Efreet, and Fiery Gambit, but I'm going to stay away from going all in on the coin flipping tribal and try to get more more voltron feeling cards in the deck. Splurge for a Mana Crypt here! It flips coins!