Do Your Worst - Boros Landfall

The Lay of the Lands

Hello, everyone! Welcome to another installment of Do Your Worst, where we take a popular archetype and find the most unusual home for it! I'm your host, Philomène, and in this column, we look at decks that shouldn't be – or should they?

Love them or hate them, lands-matter decks are pretty popular at Commander tables. I can understand the appeal: playing lands is the absolute minimum you have to do to play the game, and getting rewarded for it is really powerful! I myself had a Radha, Heart of Keld deck (though it was mostly for tall, dual-wielding, barbarian lady reasons, I must admit), and cards like Avenger of Zendikar or Tireless Tracker can create threatening board states and insane amounts of value, all at the drop of a land.

To build the "worst" lands deck, let's look at the typical color spread of the archetype, and go from there! 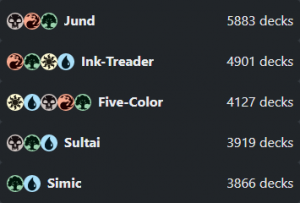 The five most played color combinations for the lands archetype at time of writing.

The five commanders representing these combinations are Lord Windgrace, Omnath, Locus of Creation, Child of Alara (replacing the banned Golos, Tireless Pilgrim), Nine-Fingers Keene, and Aesi, Tyrant of Gyre Strait. If we take the average deck for each of them and look at the color spread of relevant cards, we get: 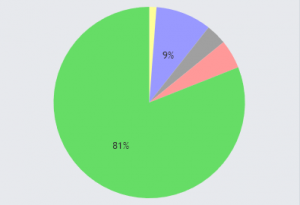 Like I said in my 2022 retrospective, the only reason blue is the second-best color here is because of all the cards played with the Simic color identity, like Growth Spiral. In fact, the only mono-blue cards in all the average decks put together are Roil Elemental, Meloku the Clouded Mirror, Retreat to Coralhelm, and two Gate-related cards, Guild Summit and Way of the Thief. Still, blue being a part of Simic means that we should try and avoid it. I have to say, I'm really surprised white is the worst color here. In my mind, white is the second-best at land ramp besides green. Yes, it is often "catch-up" ramp, but it is ramp nonetheless. Then we have to choose: do we go Orzhov or Boros?

The way green maximizes Landfall triggers is either by playing several lands a turn or by ramping to put more lands into play. We don't get additional land drops in Mardu colors outside of Ghirapur Orrery and Storm Cauldron, so we might want to rely on another strategy.

You know what white is really good at? Bringing back permanents that left the battlefield this turn. "Permanents" includes lands! Cards like Brought Back, Second Sunrise, and Cosmic Intervention can bring back lands that have been sacrificed by Zuran Orb and trigger all our Landfall cards again. We could build a kind of lands-aristocrats strategy and, by the same token, profit from some of the white-based "catch-up" ramp as well. Oh, I like where this is going. Which commanders could support this strategy?

I like Quintorius, Field Historian for Boros because we get a Spirit everytime we bring back a land from the graveyard. Value! (Also, Loxodons are cool.) In Orzhov, Minthara, Merciless Soul acts as an anthem effect, and since we want to be sacrificing lands every turn, our experience counters will grow accordingly. Plus, these counters can't be interacted with, so we don't loose all our progress if Minthara gets removed – we only have to play her again. Then, Toggo, Goblin Weaponsmith opens up some options to go full Mardu, with Ravos, Soultender as a Partner perhaps.

I have brewed a lot of different versions, and I must say that Quintorius, Field Historian is, to me, the most fun. Let's go Boros lands!

First and foremost, how do we benefit from lands entering the battlefield?

We have some nice options! Emeria Angel, Felidar Retreat, Retreat to Emeria, and Nesting Dragon all create tokens, which goes really well with what Boros usually wants to do: go wide. Canyon Jerboa and Moraug, Fury of Akoum help us improve our combat step(s) quite a bit, and Emeria Shepherd is a powerful source of recursion. We also have Tunneling Geopede and Spitfire Lagac to weaponize our Landfall triggers and hurt our opponents.

Our main strategy is to be able to sacrifice lands and bring them back over and over again. How do we do that?

First, we want our sacrifice outlets to be at instant speed and free, if possible. Zuran Orb and Need for Speed are perfect for that, and we have an Enlightened Tutor as a third copy of these cards. If you prefer not to run tutors, you can always play Troubled Healer or Trenching Steed instead. We have other ways to get lands into the graveyard: Nahiri's Lithoforming can be a way to refill our hand while triggering some Landfall, while Lotus Field and Scorched Ruins can help keep our land count low.

Our land recursion package is quite deep.

Brought Back, Second Sunrise, Cosmic Intervention, and Faith's Reward will be our huge play-makers. Sacrifice all your lands on your opponent's end step, bring them all back, create a million tokens, then move to your turn and swing for lethal. They also work really well with Armageddon! Mass land destruction as a wincon is valid, change my mind. (If your playgroup doesn't like Armaggeddon, try Cleansing instead! Your friends can pay life instead of sacrificing their lands. Surely they will thank you for giving them the choice.)

Repeatable land recursion is possible with Crucible of Worlds, Sun Titan, and Sevinne's Reclamation. Serra Paragon is complicated. The lands we play with her should get exiled if they go back to the graveyard, but we can respond to the exile trigger, bring the lands back with some of our instant-speed recursion, and we won't have to exile them.

Lastly, we play Planar Birth. With our current gameplan, it's at worst a Rampant Growth, and at best a good impression of Splendid Reclamation.

Living Off the Lands

Covering our basics seems to make sense in a lands deck.

Honestly, white ramp has gotten so potent that this section kind of filled itself. Deep Gnome Terramancer, Knight of the White Orchid, and Kor Cartographer all search for Plains cards, so they can fix our mana as well as ramp. The second chapter of The Restoration of Eiganjo fits really well with what Quintorius, Field Historian is doing, and this wouldn't be a Boros deck without Equipment! Sword of the Animist and Sword of Hearth and Home are exactly what the doctor ordered. Wayfarer's Bauble has some nice synergy with Emeria Shepherd: sacrifice the Bauble, put a Plains into play, then Emeria Shepherd can bring back the Bauble to the battlefield. Rinse and repeat. Look at us go!

Valakut Exploration gives us some nice impulse draw. Land Tax and Archaeomancer's Map can get us some lands. Cleansing Wildfire is a nice little cantrip for us, or it's a way to get rid of an opponent's Cabal Coffers. Thrilling Discovery and Faithless Looting help us fix our hand and fill our graveyard. Underworld Breach doesn't work with lands, but it's just a good card, and it does amazing work with Quintorius. In that respect, Reconstruct History is also very good. Tocasia's Welcome came out recently and has impressed me a lot, especially when we can create tokens at instant speed.

The Dredge on Shenanigans works nicely with our commander. Path to Exile, Winds of Abandon, and Settle the Wreckage can potentially ramp our opponents, but with Archaeomancer's Map and Deep Gnome Terramancer, we can benefit from that! We can also use Settle the Wreckage on our own attacking army to go fetch some basic lands and trigger some Landfall. Corner case, but it is an option!

Now for the protection department. We will want to go wide, so it's a good idea to be prepared for board wipes. Your Temple Is Under Attack is a nice modal spell that draws some cards if we don't end up using it. Boros Charm can protect not only our creatures but also our lands. It's just another way to make our opponents cry when we cast Armageddon.

We're a lands deck, so Expedition Map is a must. Elesh Norn, Mother of Machines will double our Landfall triggers and is just good value when we have cards with good ETBs, like Sun Titan and Solemn Simulacrum, in the deck. (In fact, she could helm a lands deck on her own - check out our own DougY's version here!) Tiller Engine does good work when a lot of your lands come into play tapped, and Anointed Procession will help us grow our token army even bigger.

If you have them, play every possible fetchland in Boros, but if you're a poor musician like me, Cabaretti Courtyard, Evolving Wilds, Fabled Passage, Myriad Landscape, and Terramorphic Expanse will do the job. You can sacrifice Flagstones of Trokair, Gods' Eye, Gate to the Reikai, or Drownyard Temple for value. Also, we have Thespian's Stage and Dark Depths in here, because why not?

Enough roaming and wandering about, let's look at that decklist!

This deck was kind of an eye-opener for me. I really think there should be more white-based land decks out there. Going Orzhov with Minthara, Merciless Soul, which was our second option, lets us have an aristocrats subtheme with Bloodghast and Skyclave Shade. We can curse ourselves with Curse of the Restless Dead, sacrifice lands to Braids, Arisen Nightmare, or win the game with a convoluted combo involving Codex Shredder, Zuran Orb, Second Sunrise, and Scrib Nibblers to exile our opponents' libraries. How neat!

I really think white has come a long way in terms of land ramp, and it's good to give green a little competition.

Before I leave you today, I just want to swoon at some Dominik Mayer art. We have the opportunity to play three of his works in this deck (seen below), and that makes me so happy. Zendikar Rising also had other beautiful alternate art treatments, like Felidar Retreat and Valakut Exploration, done by different artists (Tyler Smith and Aenami respectively).

So, how would you build a Boros lands deck? Are you okay with sacrificing your lands? Is there some sweet card or synergy that I missed? Would you have built your nongreen lands deck with other color options, like mono-blue (Cosima, God of the Voyage) or even mono-black (Korlash, Heir to Blackblade)? Let me know in the comments! I'm Philomène, and this has been Do Your Worst. See you next time!