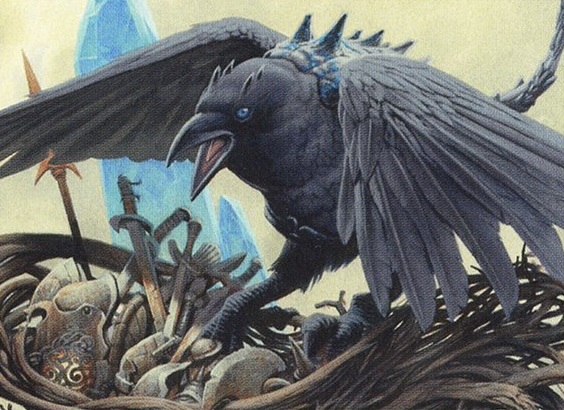 There's something about those strange, black birds. They're too clever by half. The family-minded crow, with her flock of scores, or the lonelier raven, grand and imposing. Folks have been writing about them for as long as they've had writing, and they were musing about the talkative little creatures well before any human hand put pen to paper, or chisel to stone.

The First Nations of the American Pacific Northwest variously mythologize the raven as a creator god and a trickster god. There are multiple crow-riders in Hindu mythology, sometimes fearsome and inauspicious, other times heralding justice, spiritual rigor, and conscientiousness. To the Irish gods, ravens were inextricable from warfare, reliably assembling to clean the flesh from the fields of battle. The Welsh god Bran is named so: literally meaning raven. The raven is the first bird mentioned in the Bible. They are prophecy, they are thought, they are memory. Even more, their characters exhibit industry and laziness, carnality and temperance, discipline and boredom.

The world over, we've seen ourselves in these birds.

In this series, we put two decks into one. This usually presents as a deck's theme being streamlined slightly, so as to accommodate the inclusion of a secondary theme, and it's the goal of the experiment to try and reconcile these two fractions. Sometimes we find unexpected synergy, and other times, things prove a little too jarring. Rarely, we tap into an unexplored theme - a combination of cards that we don't see in tandem with any statistical significance on EDHREC - either because it's perceived as too difficult to make a small or unsupported theme shine, or simply because it's weird and unwieldy.

And no, this one doesn't involve Bird tribal (although plenty of our creatures are technically going to be Birds). Instead, we'll focus on those uncanny totems that are still erected to this day, as if the warding charms of men might have anything of import to say to the crows. More often than not, I see common ravens perching on the stiff limbs of scarecrows, unafraid of whatever repellent qualities the straw might have. Like they might be mocking us. Or perhaps teasing is a better word, as I've never detected malice in crows - only trickery.

It's no great secret that crows and ravens are up to more than they let on, as anyone who has had their things tampered with by the birds can attest to. Once, when I was on the Channel Islands off the coast of California, I saw a common raven descend upon an unattended backpack in the campgrounds, unzip the largest pocket with its beak, and steal a cell phone.

I'm not sure what it needed a smartphone for, but it stands to reason that these birds have a multifarious toolbox. Thus, we arrive at "charms" tribal.

So without any further obfuscation or meandering rumination, this is a Scarecrow tribal list helmed by Reaper King, reinforcing his legion with an armory of charms. Charms in Magic typically belong to cycles, each finding their identity in their modality. These modal cards are multitaskers, much like the cycle of commands.

Note the difference: the Charms grant us one of the modes, while the Commands grant us two. (Meanwhile, Sublime Epiphany can give us all of them.) Since this is a WUBRG list, and the charms tend to demand a little more color (and since crows are charming - come on, they're dressed in all black, so they're ready for any formal event!), we'll exclude the Commands and take advantage of our rainbow identity.

Okay, justifications aside, let's see how this works.

Distracted by the Shiny

As you can see, this deck can do a lot of very specific things. Did our opponent field infinite creatures? Let's kill them with Rakdos Charm. Do our creatures represent lethal damage, but our opponent have a ton of blockers? Clear the way with Naya Charm. We can burn, we can heal, we can deal with all manner of permanents. With Reaper King out, we're basically playing hard control. And of course, like any decent control deck, the win conditions are... lacking.

Fielding a bunch of unimpressive Scarecrows and lording over them with Brass Herald and Etchings of the Chosen can slowly turn the tide in our favor, and we have a fair bit of countermagic available to protect us from board wipes. Kindred Charge is the only tool in the list that will win us the game out of nowhere - "Out of nowhere" used here to mean "once we have an already-established board presence."

Outside of our charms, we also have a good deal of utility in our creatures, and our harbingers can fetch them for us. Elvish Harbinger, Faerie Harbinger, and Flamekin Harbinger would all make excellent crows. However, there aren't really any game-winning fetch targets. Mirror Entity can get it done, but we still need a wide board state, and plenty of mana ready. Thus, our Charms can help loot for Kindred Charge - Treva's Charm and Sultai Charm will help to that end - and Naya Charm can pull anything back from the graveyard.

This is a quirky deck, but crows are quirky birds. I mean, have you seen them walk? Look, if you want a deck with 30 Angel of Despairs in it, and with only a couple meaningful win cons that you have to really dig for and score off oddly specific multitools, then this is the deck for you. It should prove shiny enough to keep our attention for a little while, at least. That is, until the next unattended backpack shows itself, zippers alive with light.

That's it for this installment of Dual Shot! Reaper King is a fairly popular commander, with just over 1,000 lists on EDHREC. What strange shenanigans have you gotten up to with our pumpkin-crowned liege lord? Or, perhaps a more interesting question: what are some of the weirder interactions you've seen with Charms, Commands, or modal cards in general? When did those more specific modes come in handy? Let us know in the comments below! See you soon - the next experiment doesn't look too far off, as the crow flies.