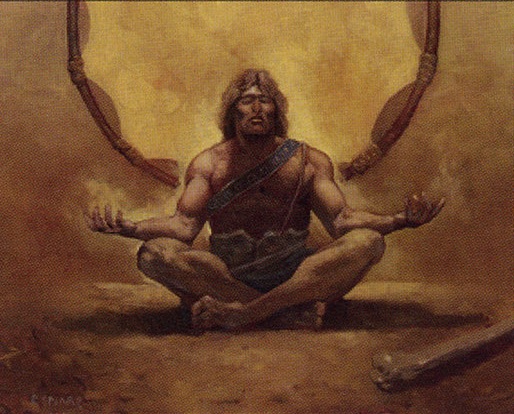 We find ourselves in a tranquil place, austere and empty. But there is no loneliness in this void. Rather, there's an effortless connection across distance with the purity of all, for, with a bit of transcendental meditation, you can find yourself with an enchantment in the command zone, and without having to resort to any rule-bending, à la Genju of the Realm.

Welcome to Dual Shot, where we brew two decks at the same time... in one deck. This time we're digging up an early experiment. We don't have to go all the way back to the Beginning, but there will be some reminiscence required.

The original plan could be summarized like this: make a Rune-Tail, Kitsune Ascendant deck and fill in the blanks. In those earliest stages, the deck didn't really turn into anything, but some recent additions in the name of frivolity have straightened our spines and set us to breathing with the evenness of deep, ego-defeating thought.

Of course, this still gives us a relatively bad deck. But there are two paths that then revealed themselves. With Rune-Tail's own peculiar defensive theme atop an Angel tribal subtheme - or instead, our perma-Fog can provide an awning for "alternate win-condition tribal." Though, before the journey of ascendance can unfold, one must first sit in the incense haze, let the sound of bells carry them to silence, and begin at the waypoint of the self.

This list is fine, but it needs more duality. A mono-white pilot that requires a certain life total to do its job immediately leads one to lifegain. Since that felt too on-the-nose (and because lifegain tends to benefit from another color or two), a slight pivot to an adjacent theme of Angel tribal was in order, and it works well to keep us above 30 for Rune-Tail.

As it stands, there's a lot of weird inclusions to excise. The weird Dual Shot beta list here was brought to 99 pretty much by adding Vulpikeet, so a lot needs to change to reliably incorporate the angelic subtheme.

That means out with Rune-Tail's vulpine friend, and we'll also make our peace with King of the Pride and Adorned Pouncer. The last thing this list needs is tertiary Cat tribal, although house cats do seem to be in some sort of meditative state most of the time. What we'll lose in cuteness, we'll gain in more sensible slot-fillers.

Let's shed some more unwanted thoughts in the pursuit of mindfulness, and attenuation with the divine. Danitha Capashen, Paragon, Regal Caracal, and Imperial Aerosaur. How'd these even get in here? Well, there they are - let's breathe them out. And if we're hoping to provide a cleaner curve to our angelic host:

All right, so that most seraphic of tribes offers a good deal of obvious flexibility in replacing our chakra-clogging chaff. And hark! there are plenty amongst the host that lean into the bridge of high life totals : Angel of Vitality most obviously, and some that are more adjacent to the tribe, like Serra Ascendant or Ajani, Strength of the Pride. But there are still some cards that don't really belong in the list as is, such as Walking Atlas; the initial brew did have a fairly low curve, but 32 lands is far too risky and makes the Atlas much more useless besides. Some of the early inclusions should be cut, simply to make room for about four more lands. But if we divert our meditations from the Angel strategy, and indeed most combat in general, we can also exclude Fireshrieker and Inquisitor's Flail.

What then? Inquisitor's Flail especially benefits from Rune-Tail, but rather than relying on Fog to win in combat, our meditative ideal can keep us afloat and gum up the board while we assemble instant wins: sudden realizations achieved after a long, transformative vision quest. That the divine was within us all along, and all our sacred icons, as beautiful as they are, are manifestations of ourselves.

So in addition to Felidar Sovereign and Approach of the Second Sun, let's decide what we can do with all the space given to us in the absence of our celestial guides.

Oh, I guess that's it. Sure, there's Barren Glory and Near-Death Experience, but this isn't the list to enable that level of esoterica. So we can comfortably run about four self-contained alternate win-cons, as well as some flavorful support pieces like Angel's Grace, or even Gideon of the Trials. We can achieve a modicum of transcendence with this cluttered list, transforming our muddied energy into something more focused. Rune-Tail, Kitsune Ascendant can provide a thin layer of protective fog, otherwise obfuscating an Angel supertheme atop an alternate win condition subtheme.

Perhaps one space for white's design to meaningfully expand into could be alternate win conditions, given its purview of the rule-writers. In lieu of that, it does have great means with which to find those forgotten laws. From Academy Rector to Idyllic Tutor, "alternate win-con tribal" is certainly functional, if a little awkward. As for the correlation to Angels, there are two shining examples to act a bridge between themes, and through tempered practice, forge that mind-body connection so necessary to meditation.

That's it for this meditation session. When have you managed to take one of Magic's iconic tribes and reframe it alongside a new approach? Angels and Dragons and Demons and the like are all well-suited to focused isolation, but when have they worked in some strange tandem for you? Let us know in the comments below!

It's nice to take a look at these old decks that helped shape the experiment, but going forward will be a trend of explorations more suited to duality. Commanders like the Kirin, for example, all neatly direct a deckbuilder towards divergent themes. And furthermore, in anticipation of the 20th Dual Shot, a deviation from the usual lists and deck techs should avail us of studying some rudiments of synergy - and allow us to take a closer peak at the idea of "bridge" cards - where commanders like Alela, Artful Provocateur so obviously invite us to try two (or more) things at once, which cards actually enable such parallel strategies?

Well then, until next time. Namaste.