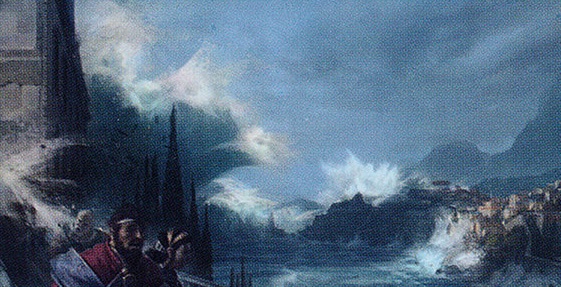 In the beginning, there was little opportunity for identity. Things meshed together aimlessly in the primordial ocean, and to every Timmy’s eye, the great sea monsters had a keen shine, standing out from the murk and brine.

Welcome to the latest episode of Dual Shot, where we brew two decks at the same time… in one deck.

Except this time, we’ll explore the origins of the experiment. How, for a lack of cards, but not for a lack of naïve inspiration, we decided to mash two deck concepts together with nary a care. In something like necessity, we noticed that those big, ridiculous creatures we so badly wanted to cast also required a lot of mana to summon.

It wasn’t long before Kruphix, God of Horizons and other harbingers of new beginnings caught our eye, and we wound up hiding a Sea Creature tribal deck inside a Big Mana deck. For the most part, we’ll be discussing the latest iteration of this brew, but let’s briefly dive into its primeval form.

This was a bad deck. I can’t definitively say that it’s become a good deck through revision, refinement, and a clearer understanding of the decks-within-decks experiment, but it certainly is a better deck. At first, I ran what I had: I had acquired Slinn Voda, the Rising Deep during a Dominaria draft, after which I recalled that I had a copy of Quest for Ula’s Temple. That meant that Whelming Wave came next, and then I hit a brick wall. The deck was too slow, and all of the weird aquatic abominations I had at my disposal never seemed to have any meaningful impact.

While I’m sure Sealock Monster makes for some interesting sushi, in a thematic void – which is really what the Sea Creature “tribal” theme feels like – it doesn’t really do anything on its own. With the new printing of Serpent of Yawning Depths, I thought perhaps I’d try again, but this time as a subtheme to a more oppressive primary theme of mass mana generation.

I changed the commander from Tatyova, Benthic Druid to Kruphix, God of Horizons, and I abandoned most of the Landfall elements that I had incorporated, relegating that to some minimal value too incidental to be considered a thematic component of the new brew. Now you’ll be piloting this list like it’s a mad dash to stick rocks, dorks, and all the other monosyllabic things that make mana. With a humble selection of counterspells and enough mana to draw much of your library, you can reliably land a win condition in the shape of a Squid. Except, no Squids. Sorry, Oneirophage.

Two Halves Did Not Make a Whole

In my defense, this list is a few years old, and while I still had some idea as to how to make a functional EDH deck, this was not demonstrative of that. This was demonstrative of a yearning, of an eye-twinkling will to make use of all the strange, clunky cards in my collection. This was… uh, well, just look at it.

In the spirit of the original motive for brewing in this fashion, this list remains very budget-friendly, only now it actually has a chance at winning a game. As you can see, the paltry Merfolk tribal package has been cut. Those that remain serve other purposes, and the typeline of "Merfolk" is just of incidental interest to Slinn Voda. More attention to the Big Mana theme has been given, and the subtheme of Sea Monsters has been streamlined - for example, what on earth (the wet parts, at least) was Frilled Sea Serpent doing in that early brew?

One clever alternate inclusion could be Thassa’s Oracle, but this would need a support package consisting of things like Blue Sun’s Zenith, Pull from Tomorrow, Stroke of Genius, and Gadwick, the Wizened, each of which would nicely slot in to this list even without the fishy new lab man. Winning with an empty library is still very difficult here, though not impossible, as you can generate enough stored mana and cast those support cards to draw huge chunks of your deck, and your Devotion can reach into the double digits without a lot of work, but it’s still very unlikely. As an alternate win condition and not just a chance to tidy up your library, this list would need to be overhauled to make way for the Oracle.

But, thanks to Coiling Oracle, there also exists a space to reimagine this deck with a Landfall theme. That strategy was present in its earliest iteration, and reinserting it here could be as simple as replacing cards like Weaver of Currents with cards like Elvish Rejuvenator, and adding in some better Landfall payoffs; think Roil Elemental.

If you don’t decide to go that way, then Scapeshift can be replaced, and the tertiary Landfall theme won’t suffer much. Tatyova, Benthic Druid is still a useful draw when you’ve got Coiling Oracle, Broken Bond, and Explosive Vegetation (not to mention the basic land fetches, if you elect to keep those in the list). Traverse the Outlands can be swapped out for a lower-CMC ramp tool, such as Nissa’s Pilgrimage Since this deck really doesn't want to be disrupted, Cyclonic Rift is practically a necessity to help keep your pieces on the board. But Crush of Tentacles, Coastal Breach, Devastation Tide, and Displacement Wave all make for solid (and extremely on-theme) replacements. In fact, each of those cards would be good inclusions in the deck even on top of Cyclonic Rift.

To make space, Rancor, Sea’s Claim, Aquitect’s Will, and Grafted Exoskeleton look to be the easiest cuts. Rancor’s persistent evasive damage isn’t that big of a loss when you also have access to islandwalk, unblockable threats, and effects that tap down permanents. Sea’s Claim and Aquitect’s Will can sometimes enable islandwalk for you, and each have their own specific impacts on color production. If you have a Forest but you need help casting Stormtide Leviathan, turn it into an Island. And Sea’s Claim can interrupt an opponent’s color early on by turning their needed color source into something blue, instead. Neither of these lanes very reliably show themselves, however, so they make easy cuts. Grafted Exoskeleton can help knock out an opponent if their life total is so high that smashing into them with unblockable 8/8s doesn’t cut it, but again, this is a fairly uncommon scenario. Ideally, your persistent mana generation and card draw should outpace any unruly lifegain situations.

Nyxbloom Ancient would be a fun, worthwhile inclusion, although, without protection, its likely to be targeted by some removal. To that end, this deck runs Lazotep Plating and Simic Charm, but those are largely to meant to keep our commander’s mana-generation churning along. That isn’t to say that including something like Nyxbloom Ancient is pointlessly risky – we’re running plenty of enormous creatures that are threatening in their own right, and they’ll be targeted, too. We make enough mana where losing a seven-drop isn’t the end of the world, so if you have it, consider running it. And on the subject of huge, game-changing, attention-grabbing creatures, Vorinclex, Voice of Hunger and Jin-Gitaxias, Core Augur would feel right at home in this list.

Omniscience looks like it provides good redundancy, but is too often irrelevant, as your indestructible commander and your half dozen mana rocks generate scores of mana for you each turn cycle. Sometimes a thing can be too redundant. Though we are running Reliquary Tower with Kruphix as our commander, so make of that what you will.

For a Dual Shot deck, this has relatively few moving parts. Play your mana-producers, play Wilderness Reclamation, Doubling Cube, or Drain Power while your commander is in play. As for the rest of your deck, you’ll be pretty much just running support in order to land your watery win conditions. The deck’s largest problems are a lack of removal (which is pretty par for the course for this series, it seems), the fact that the win conditions are all pretty much the same (heavy, evasive damage, which isn’t always enough to succeed against three opponents at 40 life), and, bizarrely, color screw. We make an awful lot of mana, but most of it is colorless, and we're running a lot of color-heavy casting costs. Granted, many of those costs look like 5UUU, so they tend to be attached to lategame drops, anyway, generally increasing the odds of you having acquired those blue mana sources you need. But since you’ll be prioritizing ramp, that late-game drop can readily become an early play, so perhaps color fixing needs to play a bigger role in this deck. Dropping utility lands in favor of more color-producing lands is a good start.

If you tune the deck more around drawing cards (Pull From Tomorrow, Hydroid Krasis) and disruption (Crush of Tentacles, Displacement Tide), even though your win conditions are somewhat inelegant, consistently turning mana into cards and cards into big creatures is more than enough to secure victory.

Having said all that, perhaps owing to the Dual Shot approach at play here, the deck feels rather amphibious, and not truly out to sea.

As always, there’s room for improvement, innovation, and giving up and making an Atraxa deck.

What did you think of this latest installment? Big Mana often paves the way for some spectacular turns. What are some epic (particularly in the context of seafaring) plays that you’ve made with a ton of mana? Did you turn it into infinite damage? Infinite mill? Or did something even stranger happen? Tell us about it in the comments below.

Till next we meet.