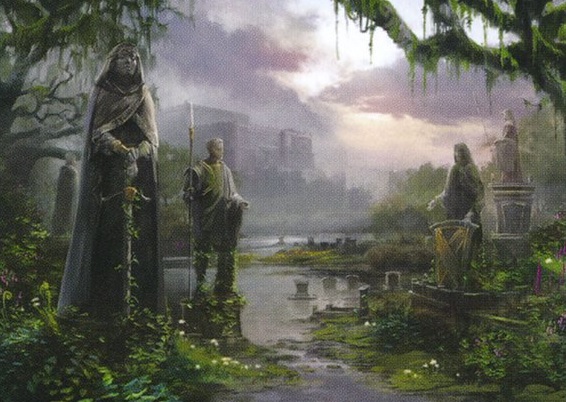 This time, the strange place we inhabit is the graveyard. A cemetery, a burial ground, a lichyard. Perhaps none of these is too accurate an appellation, as the headstones stretch to the horizon, and, towering as they are, rise up with the very landscape. No: they are the landscape.

Welcome to Dual Shot, where we brew two decks at the same time... in one deck. This list, at first glance, looks to be a land destruction deck inside a more typical lands deck. While you recycle your own lands with Lord Windgrace, The Gitrog Monster, and World Shaper, you'll also be burying your opponents' boards with Thoughts of Ruin, Helldozer, and Keldon Arsonist.

But there's already a lot of overlap between the themes of Lands and Land Destruction, according to our data. A few examples: Ramunap Excavator is showing as the #1 and #4 most synergistic cards in those lists, respectively. Windgrace is the most popular lands commander by far, and an easy second for piloting picks in land destruction lists. World Shaper, Avenger of Zendikar, and Azusa, Lost but Seeking are all very popular choices within those themes, even when you take into account their usefulness and prevalence across all decks, regardless of thematic consideration.

Once you shy away from the salt-generating strategies of mass land destruction, inclusion rates for certain cards look very similar in these two themes. Deck recs tagged with these themes bleed into one another by shape and gestalt, and it can sometimes become difficult to distinguish these archetypes. One often incidentally includes the other.

Instead, in truer Dual Shot fashion, the subtheme you'll be working with here is that of lichdom. And you'll be a lonely lord of the graveyard, as most of what you want to be sacrificing, milling, and destroying are your own lands. The creatures in this list are largely servants to that end. Otherwise, Lich's Mastery and Zuran Orb create a bizarre engine for card draw and emergency fuel to avoid killing yourself with the lich's blessing. Phylacteries always have a funny drawback, don't they?

Zuran Orb only shows up in 1% of lists here at EDHREC, and Lich's Mastery rears its head just 0.4% of the time. To that end, it's difficult to say that this is a Lands deck with a "lich" subtheme, since we don't have any data as to what that theme would look like. Usually, it seems, these sorts of cards show up as one-ofs: alternate win condtions (or, don't-lose conditions, I guess) that are difficult to nail down exactly right. But we need more than that for this experiment. Unfortunately, things like Lich and Nefarious Lich have very prohibitive mana costs, so they didn't make their way into this version, but with how much our lands move around, it's not completely unfeasible.

Aiding in our quest to become the lich lord, we have a package including Fortune Thief, Platinum Angel, Vilis, Broker of Blood, and Stunning Reversal. These are the bare bones (heh) of the smaller side of the Dual Shot, and without diving into some of the less sane "lich tribal" cards (we'll get to those later), this risky subtheme is expanded upon with a number of cards whose synergies aren't immediately obvious.

That sought-after "bridge" concept we've explored in the past shines brightly with the exemplars of Skola Grovedancer and Courser of Kruphix. Sophic Centaur and a couple of life-gain taplands are paler imitators. Additionally, there are a few cards that belong in anyone's toolbox that perform especially well here. Respite and Constant Mists, otherwise fairly typical Fog effects, prove to be multitaskers in this brew, fueling our lichdom and churning our graveyard, respectively.

Anyway, let's see what alternate-reality Windgrace got up to after he was supposed to die.

Wildfire seems to be fair enough as a single way to deal with lands en masse, and would make for a fun inclusion, but otherwise the targeted land destruction should be enough to deal with any difficult nonbasics your opponents might field. Really, what you'll be doing is moving your own lands around in a constant dance, stirring the very earth beneath you as one would a soup.

(Do not drink the soup.)

Those cards we mentioned earlier, Lich and Nefarious Lich, are awfully risky, aren't hexproof, and realistically, if you have two of these effects on board, you're probably going to lose. Oath of Lim-Dul seems a bit less likely to end in disaster. But there's nothing quite like a tutor to completely change the direction of your deck. Something like Mastermind's Acquisition might be a better option to augment the lich tribal subtheme.

Speaking of, there are quite a few lich effects that aren't in our colors. Cards like Illusions of Grandeur, Delusions of Mediocrity, and Transcendence are all interesting but outside of our identity. Messing with these effects seems thematically viable, superficially, anyway. It's just that these are as likely to lose you the game as anything else. Under Lord Windgrace's tutelage, having a yard full of permanents seems like a reasonably safe way to offset that danger, but as Lich's Mastery eats away our discard pile, your land recursion strategy weakens.

The inclusion I most wanted to slot in was Lich's Mirror. It felt safely redundant - having Mastery and the Mirror out together means that if you're about to drown in your own strange circuity (read: Mastery completely backfires), you can target Lich's Mastery with its own ability (it has hexproof, not shroud), losing you the game but for the Mirror's saving graces.

It might be fun to try grabbing every card with the word "lich" in its name...

But this deck was an attempt to try and meaningfully focus lichdom as a subtheme, here supporting a larger strategy of rather recklessly moving permanents between zones. Some "tribes" are indeed supported in the sense that there are quite a lot of cards befitting that particular strategy, but prove difficult to combine in an effective way, and demand a good deal of creativity to come up with any sort of thematic cohesion. Then there are tribes that simply lack the cards, like, for example, Moose tribal.

Ah, there! Technically a Moose, I think.

See what I mean?

Anyway, that's it for this week... and for a few other weeks, at that. Dual Shot will be taking a brief break to try and hideously merge some more subthemes and superthemes together for your heckling, er, reading pleasure. In the meantime, let us know what unexplored themes you've tried playing with, and what the results were. Was it something a bit more visible, like liches, or as our own Kyle Massa explored one year ago, Proliferate? Or was it significantly stranger, like eyepatch tribal? Seriously, there are only like three Pirates who fit that bill. Not an easy deck to build.

Well, until next time. Have fun, and stay safe out there!