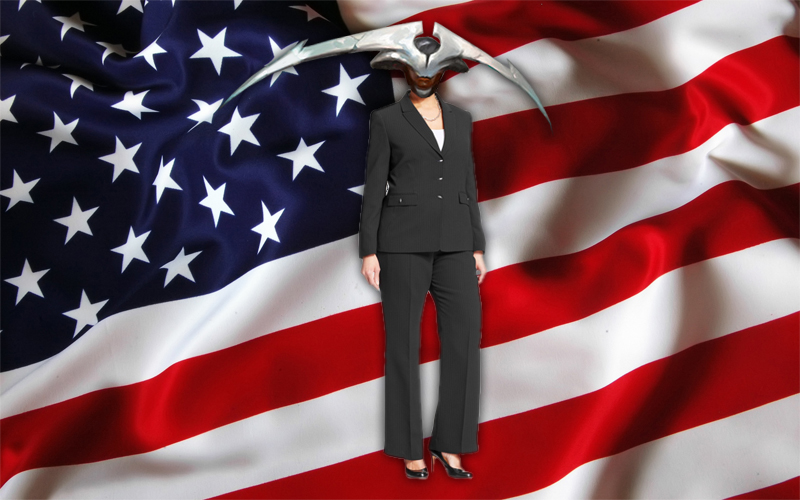 In politics, everything is a weapon to be used against you. Each picture unravels your personality, each statement twisted to abomination, and each decision you make could be your last. In Magic: The Gathering, each card you draw brings you closer to the bottom, each attacking creature leaves you vulnerable, and each spell could be your last. The previous EDH political science article saw us become a dictator unyielding in our diabolical plans. I mentioned that you did not need a world of deception and manipulation to utilize politics in a game of Commander. This time we will.

Hard power and soft power are concepts in political science that entail deception and manipulation. Politicians control and manipulate the local and world stage with these concepts (when they’re not texting lewd pictures to minors). Specifically, hard power embodies these ideas; it is the practice of manipulation, aggression, intimidation, or general coercion. Soft power is the opposite, it is the allure of symbiotic relationships and attractive personalities to achieve desired outcomes. Soft power is potentially as manipulative as hard power, or it can be honest, mutual benefits. This is great for Commander. You want to help your friends and have them help you, until you drain them for what’s left. Building a deck to emphasize these concepts is a great way to understand how to utilize their power in games. To start, let’s build a politician.

The Politician We Deserve

Firstly, we pick our politician. We need someone the people can love, so blue is necessary. Blue, as many mage’s first choice, can be manipulative and is a big part of the group hug strategy by helping everyone draw cards or gain mutual benefits. Group hug is great because it’s a way to represent our soft power. Bant is the traditional group hug shard, however the Bant commanders are all tired and washed up as politicians. We need someone new. We could go with “Kynaios and Tiro of Meletis” but they don’t have that true jaded, corrupt side necessary for politicians. They are too easy of a choice for group hug. We need someone with a little more edge. Someone who can coerce. We need Atraxa, Praetors' Voice. Proliferate as a mechanic is underutilized in group hug strategies and praetors are natural politicians. Being an “Angel Horror” fits our ideals. What’s better than the literal embodiment of good and evil? That’s someone I could see as a friend, but I don’t want to mess with either. Besides, can’t you see her rocking a pantsuit? 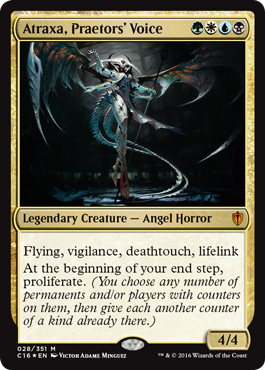 Finding the best cards that fit our group hug is the best first step. Naturally we need the basic group hug cards, such as the new Orzhov Advokist or the classic Rites of Flourishing. Let’s move on from that though, you can figure out on your own how to build the boring basic group hug. I want to build something with more political flare and gravitas like a “we like Ike” campaign or something controversial like, “I did not have sexual relations with that woman”. Decisions are what give players that gravitas and flare, and anytime we give someone a decision, we can sprinkle on a little manipulation. Divining ways that decision cards can always come out in your favor is joyous. Split Decision is fun for just the friends you keep. Killing Wave brings mass genocide or self-sacrifice, so your opponents decide and you casually deny involvement.

A key to the soft power is growing your alliances. Here you get to make Jace Beleren your second-in-command. Everyone loves Party Jace! He lets you draw cards, everyone draw cards, or hand out specific favors to people. His ultimate could also work to your favor. Other 'party cards' like this are also favorites; Evolutionary Escalation, Intellectual Offering, and Cauldron of Souls. Cards like these let you pick favorites, but don’t put any one person into a position of greater power than you. Once you start playing favorites, though, you need to argue your way out of the position many times. Make sure everyone knows that you “are not a crook”. That you’re not just giving handouts to take that person down soon. No that would never be your plan, you’re just helping from the bottom of your heart and you are not out to win this game at all, right? At least that’s what they need to think.

Now that we have got the pansy stuff out of the way, let’s knock some skulls. Once we have our opponents full of cards, mana, and wishful thinking how do we finish things off? We could use a mill strategy that blue and black gives us to finish it off. Mana abundance is to our advantage as well, so how about “deal X damage” spells? Black has no lack of those soul-sucking-spells and it’s a perfect metaphor with modern politics. Propaganda is always the politician's friend. Having a credible threat like Atraxa behind strong 'pillow fort' cards can end games quickly. A few examples of each are necessary and strategy variance is a core principal of EDH.

Finishing off a big group bear hug with mind magic is not the best way to make friends. It is fun and effective though. Our right-hand politician, Jace, is our true drive behind this part of the deck. Atraxa and planeswalkers are overdone in the EDH community, but seeing as how powerful he is we should work with at least one. Library manipulation is not a core part of the deck, but it can be a powerful finisher. The cards we need for this one need to do the job on their own. So, we could use Sphinx's Tutelage, Keening Stone, and Sands of Delirium. They work well with the deck’s strategies and are non-obtrusive. Appeasing Jace leads to a powerful ally, and he’s here to look pretty.

Dealing “X damage” is like all of what else we need to do. We need the aggression as well as manipulation. Making friends can be fantastic, but if we can blow the last player out with one simple spell, then that's great. You don't always get so lucky, and you may need help. Using one big spell to finish off what a friend starts is a standard part of many EDH games. Then you go all Soviet on their ass and iron curtain your way to victory. Don’t go Putin all your cards away yet though. To get to that point you need to eliminate threats. Be like the good politician you are and have vague answers to strong threats. Answers like Anguished Unmaking are exactly the thing you need to stop a threat that was going to break you before you could break them. Make each Swan Song not your last, and show them some Merciless Eviction

Propaganda is the last piece to the puzzle. Cards like this in ability and style are perfect. Not only do you need to prevent attacks with Ghostly Prison and War Tax, but playing cards matching our political theme brings everything together. It’s major style points. Azor's Elocutors is a must. How fun is that? You bring out your politician to bring War Tax and Propaganda, holding them back with red tape while your bureaucrats Azor's Elocutors win you everything. However, it’s no fun for everyone else.

This list does too many things at once, but isn’t that what you want your politicians doing? This is trying to be a fun rethinking of an already overused commander. Don’t go bringing this to an overpowered GP side event, but go ahead, drive your friends mad. Don that pantsuit and become that politician you always wanted to be.