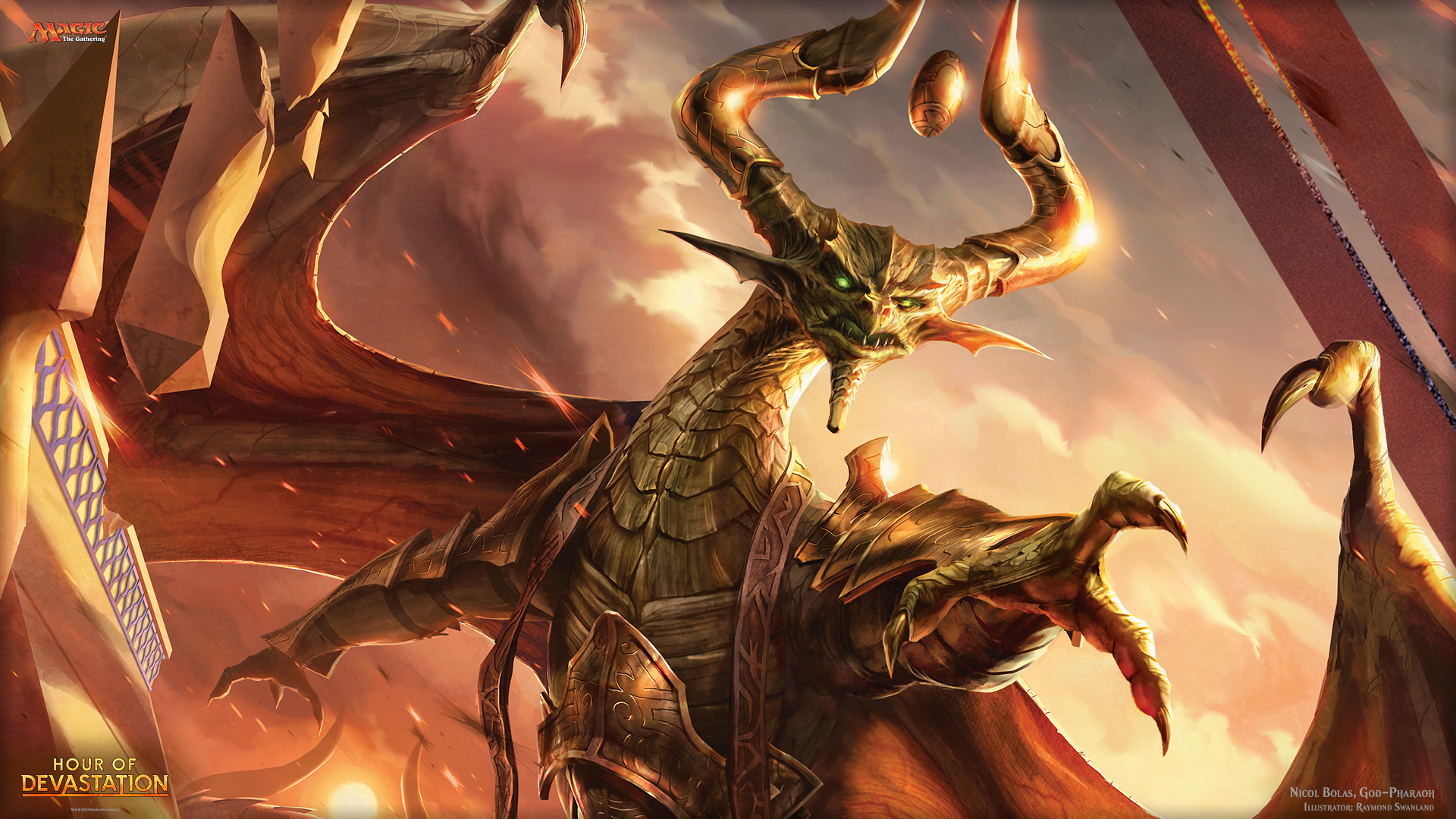 Heroes are what write books, and get movies onto the silver screen. Villains keep us enthralled and hooked. Foils are vastly more intriguing than protagonists. Dracula, Darth Vader, and The Joker are the figures that we remember more vividly than heroes. Through history villains have had more appeal than their fictional counterparts. The attention that follows historical baddies may be amplified by a relative lack of unequivocally great heroes. Real life heroes can never be as good as real life villains are bad. The historical basis for Dracula, Vlad the Impailer, is much more horrifying than the fictional counterpart could ever be. Nazis have incurred countless fictional inspirations, and North Korea’s Kim Jong Un is in the news at least weekly these days. What can we take from the real world political villains to use in our deck building? How can evil regimes rise, thrive, and fall in a way that helps our Nicol Bolas god deck?

Nicol Bolas wrecking Amonkhet is just another step in villainy. He had to have a rough beginning. The mending was a toll, and being such a smart nerd that all the other planeswalkers wanted to break his glasses on the playground was difficult. Then he started wreaking havoc on Alara and wearing contacts. Times have been better for Bolas lately. Antagonists need a beginning, too. They start as an opposition to the status quo. Others shunning their ideas is essential. Political distance and volatility creates room for extremism to build. You wouldn’t have an extreme reaction from Kim Jong Un if everyone else on the planet thought North Korea was forgettable and as minor a nuisance as a mosquito. Villains start from the ideas that others hate being spread. I love land death. That is where we will start our life of villainy. I also love making people discard their entire hand, but we will get to Nicol Bolas later. Nothing beats playing Blood Moon or Ruination in a match with plenty of players still riding the Commander 2016 pre-con wave. This is obviously not a popular opinion, but if you want that idea to work, then you have to be ready for the political ramifications. You will not be a popular player. Like Kim Jong Un, you may end up with only one friend, but who wants to be friends with Dennis Rodman?

When you run this level of hate, as we have discussed before in this series, you must be willing to face the consequences. This, in many previous cases, was weaseling your way out with political savvy. This time you must own it. Being prepared to fight is essential. Hate begets more hate. Bring the Counterspells, bring the Propaganda. Playing this hate early can get you a big lead if you built your mana base right, but can also bring wrath upon you too soon. Having control is helpful, but the next step in villainy can bring success as well.

Thriving in an environment where everyone is out to get you is no small task. This may hark back to my first article ever on EDHREC where I teach readers how to be a maniacal dictator. A theory touched on there that I never named was the Madman theory. Crafted by the tricky Dick Nixon, this potent principle states that you act like such a madman that no one wants to mess with you for fear of becoming a target. If you can swing Nicol Bolas at someone and make them lose everything they have, or break their mind, body and spirit with a Cruel Ultimatum then you may not always get the attention on you. This madman theory doesn’t always work in zero-sum game like magic. Opponents may decide to bring all their power at you first. Keeping them off base is important. Our land destruction and counter magic can help do that, but there needs to be something more. Wheel of Fortune effects have a great destabilizing effect on a game. They create massive amounts of variance, leading to giving the right card to the right person sometimes, but often times can be crafted into a winning strategy with patience. With madman theory in full balance and while you’re running wheel effects and a discard general, you may as well utilize this freedom to play Megrim. Waste Not is a similar effect that you would play regardless, but Megrim and Liliana’s Caress you may not be crazy enough to always play.

Fall into the Rabbit Hole

Simply because we can be our villainous selves, doesn’t mean we can’t cross a line. Being the one to invade Austria never starts you out on a good foot. Recognizing the beginning of the end is important. Cruel Ultimatum can be that last straw for the remaining opponents (because you know whoever you cast it on is not living for very long.) Toeing the line of having the freedom to intimidate whoever you feel like and not incurring the wrath of everyone at once is important. The quickest way to lose is to you make everyone hate you.

The new gods were a main focus for this deck. I wanted a way to have all of them shine when drawn. The Scarab God and The Locust God were actually an easy solution that already had a main feature in the deck, Wheel of Fortune. These effects draw you into a wave of locusts and fill everyone’s graveyards with juicy targets for the scarabs. The Scorpion God was harder to fill easily, but simply playing cards that had to do with -1/-1 counters that were already good by themselves was the easiest way to go. Black Sun’s Zenith is a great card anyway, but a card like Archfiend of Ifnir has layers of synergy. The negative counters it gives work with our Scorpion friend, but they are also triggered by our wheel effects. Utilizing cycling effects that are cards we want anyway makes Archfiend of Ifnir always a welcome sight. I tried to craft the mana base and ramp to mainly fetch basics. This is, of course, important when you are looking to bring things Back to Basics. There are a couple of cards that will be difficult to cast, but much of the deck should work itself out.

I hope this helps bring your new reign of villainy to its rightful conclusion. I would love to hear your stories of villainy in the comments section. What did you think of the break from usual politicking for a strategy that comes from ignoring that? What are your suggestions for future article ideas? I really could use some fresh thoughts. Thanks for reading and keep up your backstabbing.