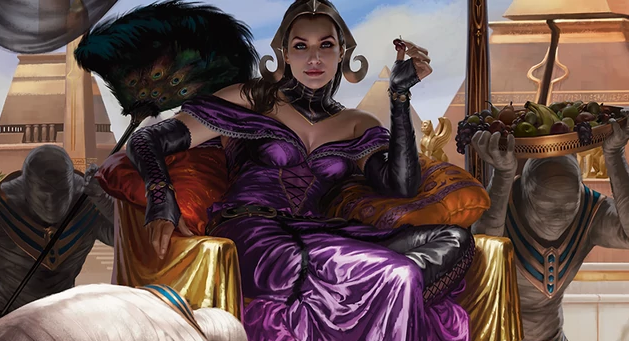 Marionettes On a String

Manipulation. Deceit. Coercion. Bribery. If these words appeal to you, you might be a Puppet Master. Or maybe a criminal. Or both?

In any case, politics are an essential part of every game of EDH. Whenever we play, we make deals, threats, and treaties. But that's just scratching the surface. Being a Puppet Master is all about playing the political game of the table, and playing it more than others.

Puppet Masters tend to do a lot of talking. They're the players proposing multi-turn deals, pointing out threats, and stirring up table controversy. Puppet Masters are also the players most likely to talk their way out of situations rather than acting directly. All this makes them powerful adversaries.

Some classic Puppet Master lines include the following:

All these examples prove that Puppet Masters are sly, cunning, and tricky (and usually have really good memories). Folks from this psychographic play other players like they play their own cards.

EDHREC provides excellent insight into Puppet Masters. When looking for players that fall into this psychographic, I start with commanders, specifically those that reward other players for doing what they want. Here are some classic Puppet Master commanders, along with the numbers on their decks:

In total, that gives us almost 2000 Puppet Masters on EDHREC using this calculation method. Not bad.

One note: In my original article about psychographics, I had Edric, Spymaster of Trest listed as a Puppet Master commander. I've since omitted him because most builds do not take advantage of his political possibilities. See ya, Eddie!

In addition to these commanders, there are always a few cards printed in every commander set that appeal especially to Puppet Masters. If you find yourself constantly running these in your decks, you likely fall into this psychographic.

I'd say this psychographic is one of the very hardest to play against. By their very nature, Puppet Masters unpredictable, cunning, and treacherous. Just when you think you've got them, a good Master will find a way to recruit others to their side.

That being said, a Puppet Master never wants the table to know they're a Puppet Master. When they suggest a play, for example, they want it to appear that they're just looking out for the rest of the table, not trying to influence the outcome of the game. Use it against them. Point out their manipulation.

For example, a classic Puppet Master line goes like this: "That commander is super dangerous. Can anyone deal with it?" Of course, the Puppet Master uses the plural pronoun "we" to make it appear they're helping everyone else at the table.

Point it out. Make sure everyone sees the machinations behind the apparent courtesy. You'd be surprised at how fast players turn on Puppet Masters once they recognize the scheming. Nobody wants to be manipulated or compelled to do something without knowing it.

A Few Signs You Might be a Puppet Master

If any of the following sound familiar, you just might be a Puppet Master.

Are You a Puppet Master?