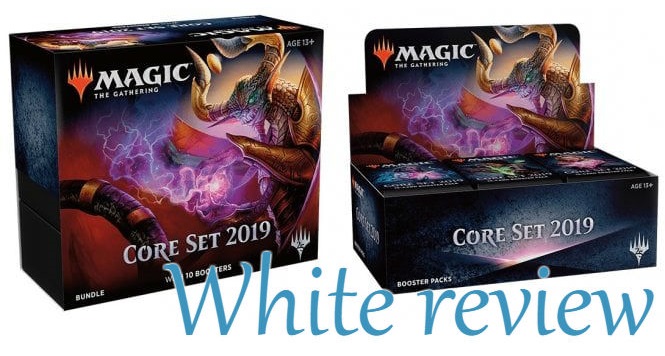 Welcome to the EDHREC Core Set 2019 review for the white slice of the color pie. This is the first Core Set since Origins back in 2015, which was definitely a standout among other Core expansions. A lot has happened in the interim, including a pretty stellar run of sets filled with decent reprints and new EDH cards. Has Wizards continued to refine these products, or have we regressed back to the darker days of simpler Core Sets? Let's take a look at the notable cards and decide. 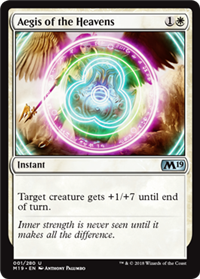 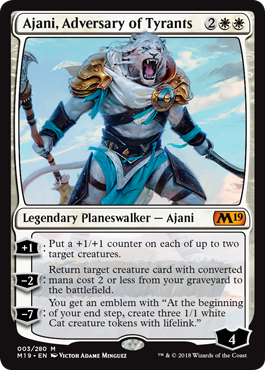 Aegis of the Heavens is probably gonna show up in a lot of Doran, the Siege Tower and Arcades the Strategist lists. These decks have access to flying, trample, and double strike, so this is fairly often a kill spell with defensive utility, and spells that flexible are always useful in EDH. It's probably not good enough outside those niche decks, but in the decks where it does work, it does work.

Ajani, Adversary of Tyrants is this Core Set's mono-white planeswalker, a role that has also been filled by Gideon in the past. His +1 is certainly better than that of Ajani Goldmane, though I'm not sure it really protects him very much. We get an interesting Reveillark-esque ability for his -2 that lets you return a creature with CMC 2 or less from your graveyard to the battlefield. That is very useful. He also creates an emblem at -7 that generates three Cat tokens with lifelink at the beginning of your end step, a trick he presumably learned from Elspeth, Sun's Champion. The end step clause is unusual and quite handy since you don't have to wait a full turn for the tokens to appear. However, is any of it useful enough to see much EDH play? Maybe in an Arahbo, Roar of the Worlds deck, and I'll replace the original Ajani with this one in my Djeru, with Eyes Open Superfriends deck. Beyond that though, he's a value generator that might not generate quite enough value.

Ajani's Last Stand might have a home in a Hanna, Ship's Navigator deck where you can replay it after it is sacrificed to make the 4/4 Avatar token. I could conceivably see it get a spot in your 99 if you played against a Nath of the Gilt Leaf deck every pod. It seems fairly weak otherwise.

Ajani's Welcome does a lot for only one white mana. Unfortunately, it isn't in the right colors for Animar, Soul of Elements, a deck known for repeatedly recasting creatures, but there should be some Deadeye Navigator or Palinchron shenanigans for Ajani's Welcome to participate in to give you infinite life. Daxos the Returned, Ayli, Eternal Pilgrim, and other similar decks also probably appreciate a hard-to-remove efficiently-costed life generator.

Angel of the Dawn probably isn't good enough for even the most budget Lyra Dawnbringer lists, but it'll be a Limited bomb. 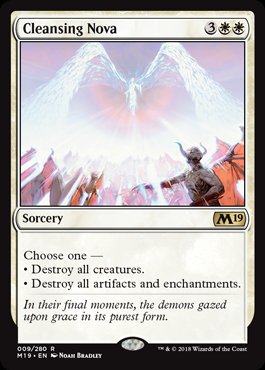 Cavalry Drillmaster could see play in a more budget Knight tribal deck but that's really his only role.

Cleansing Nova is really, really good. One mana cheaper than Austere Command, it still has a lot of flexibility in terms of what you want to remove. We've had an embarrassment of riches in the board wipe slot in white lately, from Tragic Arrogance in Origins up through Hour of Revelation in Hour of Devastation. Cleansing Nova might be the best of the bunch. This is a new mono-white staple. Unless you don't like value. If that's the case, keep running Day of Judgment.

Daybreak Chaplain, like Angel of the Dawn, probably isn't even good enough for a tribal deck. Sorry, padre.

Dwarven Priest, like Aethershield Artificer, might conceivably find a home in Dwarf tribal decks due to lack of other, better Dwarves, but it's probably less useful than even that middling card.

Gallant Cavalry, like Cavalry Drillmaster, might find a slot in budget Knight tribal builds, and is a good value generator in Limited. That's really it.

Herald of Faith is another lackluster Limited Angel.

Hieromancer's Cage is a more expensive Banishing Light, and a Cast Out that doesn't have cycling or flash. Those are both good cards, but this is not, and it won't be in many actual EDH decks unless you don't know those alternatives and Oblivion Ring exist. 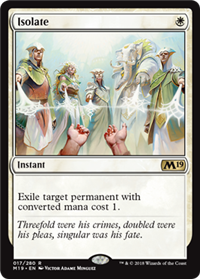 Invoke the Divine might be worth a slot in decks where lifegain is worth enough to justify paying an extra mana for a Disenchant but it's pretty unexciting otherwise.

Isolate might be more interesting to people in non-Commander formats where it can deal with things ranging from Deathrite Shaman to Aether Vial, but it's probably too narrow for our format (outside perhaps cEDH).

Knight of the Tusk is a Limited draft card that probably won't find a slot even in dollar general Knight tribal. 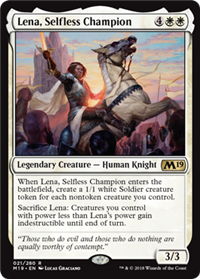 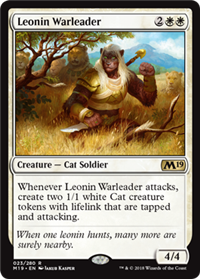 Lena, Selfless Champion feels a bit like an Intro Deck-level rare. She's an Evangel of Heliod that uses bodies instead of Devotion. Six mana may as well be a gazillion mana for a 3/3 in mono-white. That said, she does have some potential to bring a host of bodies in with her in the right go-wide deck. She's probably more at home in the 99 than atop it, but she'll see some play thanks to her upside.

Leonin Vanguard is a 1/1 with some upside in a token deck, though that upside doesn't probably warrant a slot.

Leonin Warleader probably goes in most Arahbo, Roar of the World decks or whatever variant you may be running for your Cat tribal list. There are currently 555 Arahbo lists on EDHREC and this should be in 550 of them. Four mana for a 4/4 that drops lifelinking tokens on attack is pretty great value even in non-Cat token decks. He's also a Soldier if that's your jam.

Mentor of the Meek needed a reprint, and we got one. One of the best draw options in mono-white or Boros decks that put bodies onto the field, this card has been a staple for years and will continue to be so.

Militia Bugler is a 2/3 vigilant body that lets you draw a creature with power 2 or less from among the top four cards in your library. That's a little resource advantage in white, and the trigger is repeatable with blink effects like Brago, King Eternal. It's just good enough to stare at in contemplation, but maybe not quite good enough actually pull the trigger and put in the 99.

Novice Knight is a really efficient body for Arcades the Strategist decks. However, given that Arcades has the entirety of Magic's history from which to pick defenders, I'm not sure this one is quite good enough.

Remorseful Cleric can be sacrificed to blow up a graveyard. There's cheaper, easier ways to do that in every color, namely Relic of Progenitus and Tormod's Crypt. Still, Archangel Avacyn decks often want a way to flip their commander on demand, and stax builds often want a way to force a creature death on demand for Grave Pact-type triggers. There's also a dearth of really good Clerics for Cleric tribal decks, and a 2/1 flier for 1

is nothing to scoff at. 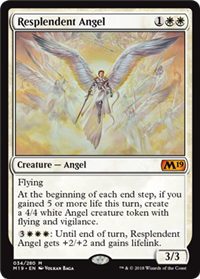 Resplendent Angel does a lot of things. It generates value in lifegain decks, token decks, and Angel tribal decks, and it's the most efficiently-costed halo we've seen since Serra Avenger. She's no Lyra Dawnbringer, but she's very solid and will show up in quite a few builds in addition to being an absolute nuke war on the dance floor in Limited.

Revitalize isn't the worst card to put under an Isochron Scepter in a lifegain deck. Not sure that justifies a slot though.

Rustwing Falcon is a 1/2 with evasion for a single white mana. That's pretty amazing. I don't know if it has a Commander role, but the fact that you can drop a 1/2 flier for one mana is something. 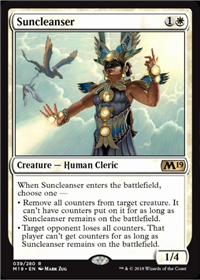 Shield Mare joins the other 26 existing Horses in the Magic stable that can round out your Brony deck. We'll speak of this card, that deck, and the material you used to make that lampshade no further.

Star-Crowned Stag might fit in the super annoying Heliod, God of the Sun Prison deck I saw once, which was designed around vigilant creatures that tapped opponents' stuff and prevented them from untapping with things like Static Orb. That's pretty specific though.

Suncleanser would have been useful in Kaladesh. It does delete experience counters, so if Mizzix of the Izzmagus actually lets you resolve this, it's perhaps an answer there. A 1/4 for two mana isn't terrible either, and she can be blinked to repeat the effect. It doesn't deal with your own Poison or enemy planeswalkers though. 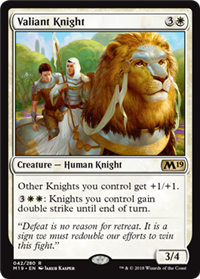 Take Vengeance lets you destroy a tapped body for 1

at sorcery speed. That's pretty great in Limited, and probably not good enough in a format with Condemn, Path to Exile and Swords to Plowshares.

Trusty Packbeast returns an artifact from your graveyard to your hand upon entering the battlefield, and it's blinkable. That's a useful ability. Useful enough? Maybe, depending on your build and budget.

Valiant Knight is a decently costed Knight lord that lets you give all your other Knights double strike as an activated ability. It probably goes in most Knight tribal decks and might be worth consideration if your commander happens to be a Knight, regardless of whether the rest of the deck also fits that theme.

Down to the Core

Okay, so what's the verdict? Well, white probably got the weakest suite of new stuff, and as good as Mentor of the Meek is, it doesn't really compare to reprints like Scapeshift, Crucible of Worlds or Omniscience. Luckily the rest of the set seems to do a lot of heavy lifting, and as a result we've gotten the best Core Set in a long, long time.

What are your thoughts? Share them below, and thanks for reading!