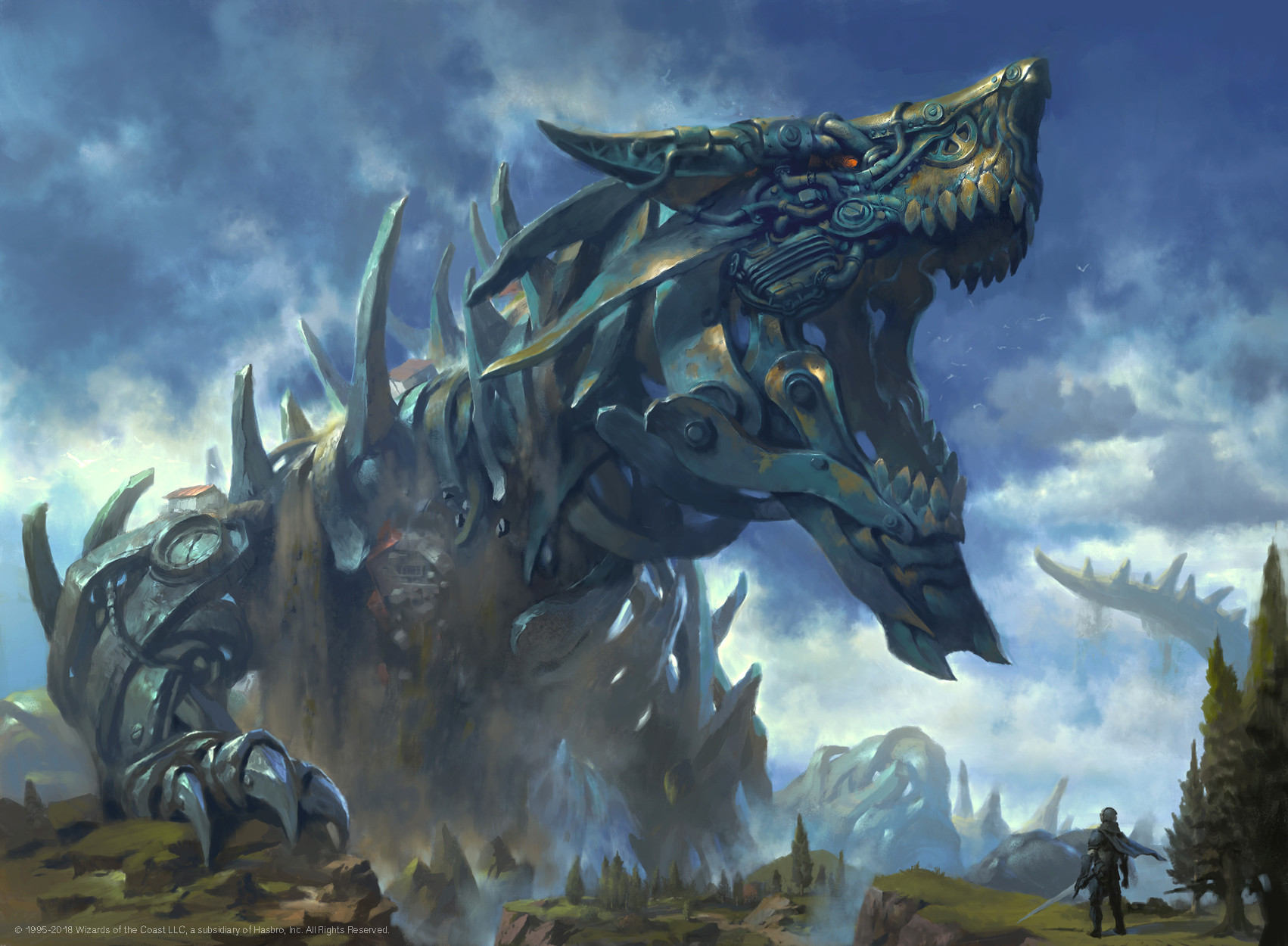 Dominaria is teeming with nostalgia, so much more so than that Masters set specifically designed to celebrate Magic's past (I'm looking at you Masters 25). Dominaria is also teeming with great Commander options, from its startling number of legendary creatures, to its seemingly endless supply of fantastic support cards. While I'm not discussing the myriad legendary creatures in the set (I still get one though!), I'm here to take a look at what Dominaria colorless spells, including artifacts and lands, might be in your future. Karn, Scion of Urza is the next in a line of colorless ways to see more cards from your deck, joining the ranks of Oracle's Vault and Azor's Gateway. This seems to be a recent trend in sets, which means that mono-red, mono-white, Boros and colorless decks all have a better selection to choose from when competing against the raw draw power available to the other colors. Although this iteration of Karn is not as splashy as Karn Liberated, Karn, Scion of Urza is no slouch. First, 5 loyalty for 4 mana is above the curve. Karn's +1 can replace himself in the card advantage game, though you do get possibly the worst card of the two. Luckily, you might have an opponent willing to help you out (Commander being a multiplayer format and all). If you really want that other card though, you can get it next turn with the -1. Just be careful - if that card is real powerful, everyone at the table is going to try to smash the golem. But hey, you can be defensive and pop out a token for -2 loyalty which, can easily be 5/5 or even higher depending on your build. All around a solid planeswalker with 3 relevant abilities for a low cost and high stats. The low-ish cost to slide Blackblade Reforged onto legendary creatures, most notably your commander, coupled with the fact that its power scales as the game progresses means that Blackblade Reforged has an outside chance of seeing play in certain Voltron or “go tall” decks. I've seen Strata Scythe do some damage before, and this feels similar. That being said, if you are going to slot this into your deck, make sure those wielding the Blackblade have some way of connecting on damage (flying, trample, menace, etc.) While Damping Sphere might have more of an impact in competitive formats, don't be surprised to see this sphere absorb your ability to make mana and cast spells in Commander. If you often run into opponents who a) love cards like Mana Reflection, b) like to storm off with an Aetherflux Reservoir in play, or c) all of the above - then Damping Sphere will keep you in the game. It does suffer from the same issue as other “stax” effects - punishing players you weren't trying to punish in the first place. Be ready for those players to start attacking you after laying down Damping Sphere, even if you're trying to stop someone else from going off. With similar mana cost and equip cost to Loxodon Warhammer and Sword of Vengeance, Forebear's Blade offers much of the same - +X/+0 and some keyword soup, this time vigilance and trample. However, Forebear's Blade does have the nice added bonus of skipping the equip cost whenever the equipped creature hits the bin. That +3/+0 bonus makes for some powerful interactions with cards like Greater Good or Altar of Dementia. Yes, this is a reprint, but Gilded Lotus is a card that you should pick up now, since it is one of the best mana rocks in the format. It sees play in 15% of all decks on EDHREC, and should be in more of yours.

Helm of the Host Have you ever wanted more than one copy of your commander in play? Helm of the Host has got your back. Want yet another card that breaks Kiki-Jiki, Mirror Breaker? Helm of the Host is your pal. Like cards like Blade of Selves or Progenitor Mimic? Hey, you now have a new friend. Luckily, Helm costs 9 total to get online and only triggers on combat, but it's not like we're talking about a format that loves big mana and extra turns or anything. I don't think Mox Amber makes the cut in a lot of decks, considering the hoops you have to go through to get it online, but I can see running this with a low mana cost commander, like Rhys the Redeemed or Norin the Wary, since your commander will hit early, netting you a nice color boost. It's hard to make a case for this in decks where the commander is higher than 3 cmc, as it might sit in your hand or on the board not doing much of anything. Traxos, Scourge of Kroog has a low enough converted mana cost and beefy enough stats that this might be the first colorless Voltron commander (sorry, Hope of Ghirapur). Being a 7/7 trampler for only 4 mana means that there is a downside, but the downside for Traxos, Scourge of Kroog doesn't make it unplayable. With Traxos, Scourge of Kroog at the helm, you're probably playing an artifact a turn (not to mention casting planeswalker powerhouses Karn Liberated or Ugin, the Spirit Dragon), so Traxos shouldn't be difficult to untap. And that isn't even talking about cards like Unwinding Clock or the fact that you can keep drawing and recasting Sensei's Divining Top every turn. 7 power is a key number for a Voltron commander. On a clear board, it's three attacks away from commander damage kill, and only +4 power away from a two hit kill. Outside of headlining a deck, though, Traxos, Scourge of Kroog might not make a lot of decklists as it is only a fragile, aggressive creature. The combat damage trigger on Weatherlight is both powerful and fun, but I'm not convinced that it's worth a slot outside of dedicated vehicle decks, since it takes a lot of work to get going. I've tried Skysoverign, Consul Flagship in decks with little luck, but there's a part of me that wishes these big beastly ships will have their day in the future. On the surface, Cabal Stronghold looks like the second coming of Cabal Coffers - a heavily played card in Commander. They do similar things, but they are competing with each other more so than they are complementing each other. Cabal Stronghold demands that you play a lot of basic Swamps to get the bonus, whereas Cabal Coffers boosts your mana off dual lands, like Blood Crypt, alongside your basic Swamps. Decks looking to capitalize on both really need to find a golden ratio where either one is strong, but it's not as simple as jamming Cabal Stronghold into the deck. Not to mention the raw power of Nykthos, Shrine to Nyx which means that Cabal Stronghold might be third best in a mono-black deck. I'm certain Cabal Stronghold is going to be great in the decks that build around it correctly, but it's not an easy auto-include that it appears to be.

Dominaria could be an all-time historic set for Commander. The fact that I could talk this long about just colorless cards and lands should be proof enough, and that's with me skipping a handful of other cards that are worth discussing. What cards did I miss? Which ones am I completely wrong about? Let me know in the comments below!