Welcome to spoiler week! It's like the nerdy version of Spring Break only we get like, six of them a year instead of just one. Plus there's way less shameful decisions made during spoiler week. Usually.

Here at EDHREC we're going to break down the spoilers every day and give you a quick rundown of the new cards spoiled. I'll be covering the cards spoiled on August 7th here, which happen to be focused on the green and white tribal deck all about tribal cats!

Let's just jump right into them, shall we? 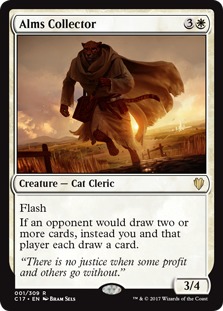 A new nifty way to both make everyone play fair and for the mono-white decks to keep up. I like the card and several of the other EDHREC authors seem to think so too. It's not as bonkers as Notion Thief but it also won't make you a huge target either. Probably not irrelevant as a blocker either, which is always nice too. 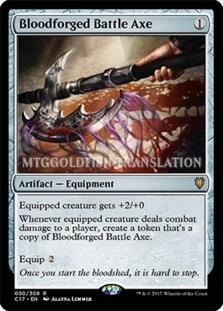 It's a Bonesplitter that splits itself. Bonesplitter is only played in about 800 decks according to EDHREC stats, but this having some upside for an extra mana to equip seems worth it. Akiri, Line-Slinger, Kemba, Kha Regent, and Rafiq of the Many seem like prime players to want this type of card. I would imagine this sees a decent amount more play than Bonesplitter or Darksteel Axe since it at least gives you some copies as the game goes along. 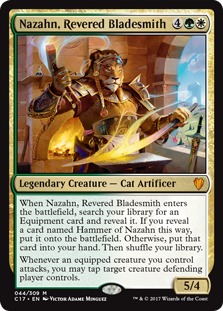 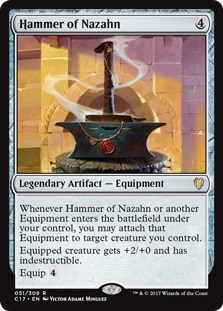 These seem worth mentioning together since they play so well together. I really like this Nazahn character. Either he can enter as a 7/4 indestructible beater or a 5/4 Steelshaper's Gift-type card to grab a silver bullet. I think he costs a BIT too much mana to be your commander since aggro decks tend to like their main win condition to hit the board a bit earlier than Nazahn typically would, but I would definitely play him in the 99 of many decks. Roon of the Hidden Realm and other decks built to abuse "enters the battlefield" effects seem like a pretty decent fit.

The legendary hammer of Tho...Nazahn isn't bad on it's own either. Automatically equipping something for free is a nice bonus for the higher costed equipment costs. Sigarda's Aid gets play in 3,000+ decks already and while this doesn't let you cast aura's and equipment at instant speed, giving a creature indestructible is right up my alley. It would be nice if the hammer itself were indestructible, but we can't have everything we want cant we? 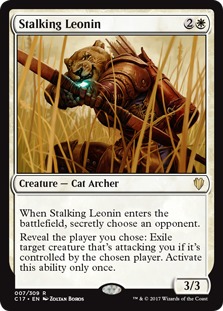 Since you "secretly" choose someone, I imagine lots of people will try to abuse this in local playgroups.

"Nah mang, I totally chose you before I knew you were going to attack with your Bruna, Light of Alabaster...!"

Yeah, that type of shenanigans. I think it's still a decent effect for three mana though. I imagine this will see some type of attention for Legacy Death & Taxes decks too since you can reset the ability with Flickerwisp. But we can do that in Commander too! We even have more ways to flicker the stealthy kitty with Brago, King Eternal and other type nonsense decks. Panharmonicon seems like a sweet way to get more value out of this too, but we already knew that... 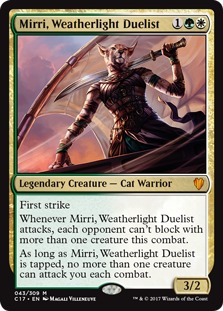 Mirri seems really sweet to pair with Sidar Kondo of Jamuraa if she had partner as an ability too. Making a Silent Arbiter/Crawlspace-type card with no downside to you is really appealing. Mirri is ALMOST a Master Warcraft for when you attack and if you're able to give her Deathtouch she can make things really awkward when it comes to blocking. She's cheap, efficient and in great colors. I find her to be a purrrfect catmander.

Arahbo, Roar of the World 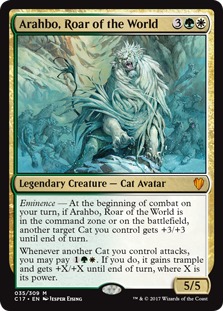 Here we have the first of the Oloro, Ageless Ascetic-type commanders with an ability from the command zone. Arahbo really pushes the tribal mechanics and seems great if you already play some giant kittens. If you have a couple cats on the field once Arahbo hits the field, you can still get some sort of value out even if your catvatar is summoning sick. Giving trample on the second ability is the part that makes the card good enough to play in my mind. Endless pumps only to get chump blocked into oblivion doesn't sound like much fun. I'm interested to see just how good these Eminence abilities are and if they make as much of an impact as Oloro's does. 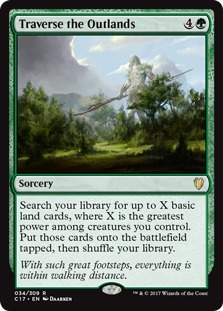 Five mana is a LOT for a ramp spell, but if you're searching for critical mass on lands then this is probably your go-to. It's like Wizards of the Coast forgot they were putting Hour of Promise into the most recent standard set. Hour of Promise let's you get specific lands, but this should be making you more mana that Hour unless you're grabbing Gaea's Cradle and/or Nykthos, Shrine to Nyx. That said, if you're playing Hour of Promise or sometimes even Skyshroud Claim you might actually play this card instead depending on the deck. My Omnath, Locus of Rage needs this card in every way. 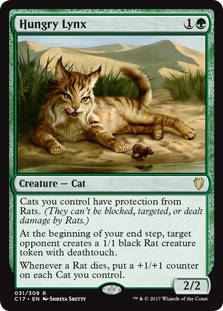 Is this card "good?" Not really. Is this card crazy powerful? Not really. Heck, I would say this card is borderline a waste of a new card slot (and my colleague Dean Gootee agrees there), but I promise you that you're going to sit down with PLENTY of uber-casual players who LOVE this card. The flavor is on point and it probably is the type of card that would get my wife to play (until they create a creature type "pug," that is). It's a fun card, but not necessarily a great one unless you go hard on naming "rat," with Engineered Plague. If that's your style then go for it. If not, you're not alone. 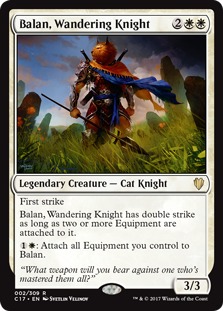 Kemba, Kha Regent suddenly has some competition for the best catmander. Instant speed and putting ALL your equipment onto him sounds nuts. Only having to pay two mana to equip feels like cheating a bit too. Balan is probably the closest that we will get to a mono-white version of Rafiq of the Many as a great aggro/voltron commander. In the head to head battle of Kemba vs. Balan I think it comes down to preference on if you want to go wide or go big. Either way wouldn't be a wrong choice at all if you ask me.

So there we have it! The first day of spoilers down, many more to come! What cards are you most excited to play with? I can't be the only person ready to play Fleecemane Lion in Commander can I?!?