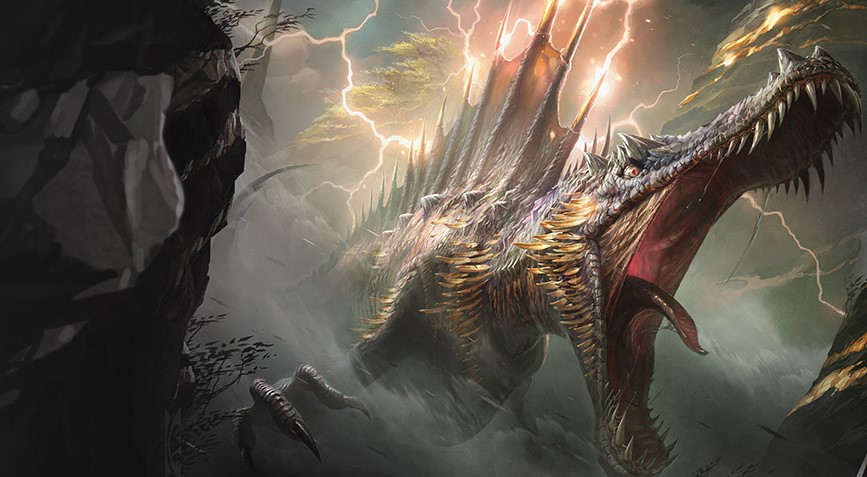 Rivals of Ixalan spoilers have officially dropped in their entirety, and I have a fistful of tickets to hype train, so all aboard! Hello, it's Dean from Dig Through Time, but today I'll be taking you through the most promising red cards in RIX. Historically mono red has been the worst, or one of the worst, colors in EDH. Red has lacked card draw, certain kinds of removal, and ramp, outside of mana rocks. Wizards has taken note of the issue, though, and with every set red is getting more and more toys to bring it up to snuff with the other three best colors. (Sorry, white.) Let's take a look at the juiciest cards we're getting this set. Choo choo! Speaking of ramp and card draw in red...holy crap! Etali, Primal Storm is absurd! This is kind of like Sunbird's Invocation in creature form, or a mono-red Narset, Enlightened Master. This was the Commanderin' podcast preview card, and they revealed it inch by agonizing inch. As they slowly spoiled it, I thought Etali was going to be a tweak on Grenzo, Havoc Raiser, but I was wrong. It's so much better than that. This kind of effect is unprecedented on a mono-red legend, and I expect we'll see a lot of Etali decks. He's one of the most powerful mono-red commanders ever printed, but his ability is open-ended, allowing you to build the deck however you want. I'm betting we'll see lots of generic mono-red goodstuff, but don't rule out other strategies. Like Neheb, the Eternal a tuned Etali deck benefits from extra combat phases for extra triggers and mass land destruction to lock each opponent out of the game. Etali may not be a tweak of Grenzo, Havoc Raiser, but that doesn't mean Grenzo isn't getting any shiny new toys. Tilonalli's Summoner is great for that deck. And not just Grenzo. In general, token decks everywhere rejoice. This is like Hanweir Garrison had an Uktabi Kong with Tempt with Vengeance. Putting those tokens into play tapped and attacking is a big deal; even if you do end up exiling them at the end of the turn they've already done their damage. Never mind that this card can easily turn Ascend on for you by itself. All of these effects are stapled to a fragile 1/1 body, but there are plenty of ways to make Tilonali's Summoner unblockable, indestructible, or otherwise protect it. I'm loving that red is getting a bunch of tricky spellcasting creatures these days. Dire Fleet Daredevil is up there with the likes of Mindclaw Shaman, Dualcaster Mage, and Wildfire Eternal which are staples in red decks everywhere. I would compare Dire Fleet Ravager to Memory Plunder. It's slightly worse in that it doesn't work at instant speed, and you actually have to spend the mana to cast the spell, but it does come stapled to a 2/1 body with first strike. The fact that this effect comes attached to a creature makes it incredibly abusable. It's great in reanimator decks, and, if you want to keep it mono-red, Feldon of the Third Path is a great place to put it. This card is going to see a lot of play. Blood Sun is the second major double-edged sword WotC has printed this year (the other being Solemnity, which can just accidentally make some opposing decks go off.) The fact that it cantrips, while Solemnity doesn't is a nice bonus. Lots of people are going to blindly run this thinking it's a budget Blood Moon, but it isn't. It may throw back to Blood Moon, but it acts very differently. Given the wording of the interaction the odd mix of lands that this improves and lands that it shuts down, it's hard to know if and how this card will help or hurt your opponents. If you plan on running it, the best course of action is to just build your mana base to abuse Blood Sun and hope that it hurts the rest of the table more than it helps them. Silverclad Ferocidons is meeeeeaaaaaannnnn. And I like that. The effect is really strong, but it's reasonably costed at seven CMC, so I wouldn't worry about this card consistently flattening your meta. Enrage is a great mechanic, and this is one of the best effects enrage can give you. Look to pair this up with stuff like Aether Flash, Caltrops, Pyrohemia, Lightmine Field, and other consistent sources of damage to keep your opponents' boards in constant check. A red Boundless Realms, Brass's Bounty can just win you the game if you have Hellkite Tyrant or Revel in Riches out when you cast it. Even without either of those cards, making a large number of artifacts has a lot of combo potential, and I'm sure that Breya, Etherium Shaper pilots everywhere are slavering. However, if you just want to run this as a big, red value ramp spell, I think that Mana Geyser is probably going to be better, given that it costs two less and has a much higher ceiling. Tormenting Voice already sees play in 4,457 decks, and Pirate's Pillage is a functional reprint...ish. The difference between these two cards is similar to the difference between Demonic Tutor and Dark Petition. In a mono-red deck, the mana cost increase is not negligible, but I still think this card will see play and do some good work. Like Brass's Bounty, it's definitely going to show up in Breya, Etherium Shaper, and decks of her ilk, if only for the free artifacts. Charging Tuskodon is a unique twist on a mechanic we've seen before. A 4/4 for five mana is already decently costed in a vacuum. Giving it trample and the ability to double its combat damage against players makes this quite playable in EDH. It doesn't even come with a downside like Inquisitor's Flail. If you really like running aggro decks, I don't think I would hesitate to open up a slot for this card. And that goes double for people running Saskia, the Unyielding.

What do you think? How did WotC do with the red cards in RIX? Did I miss your favorite card or a cool interaction? Let me know in the comments below!