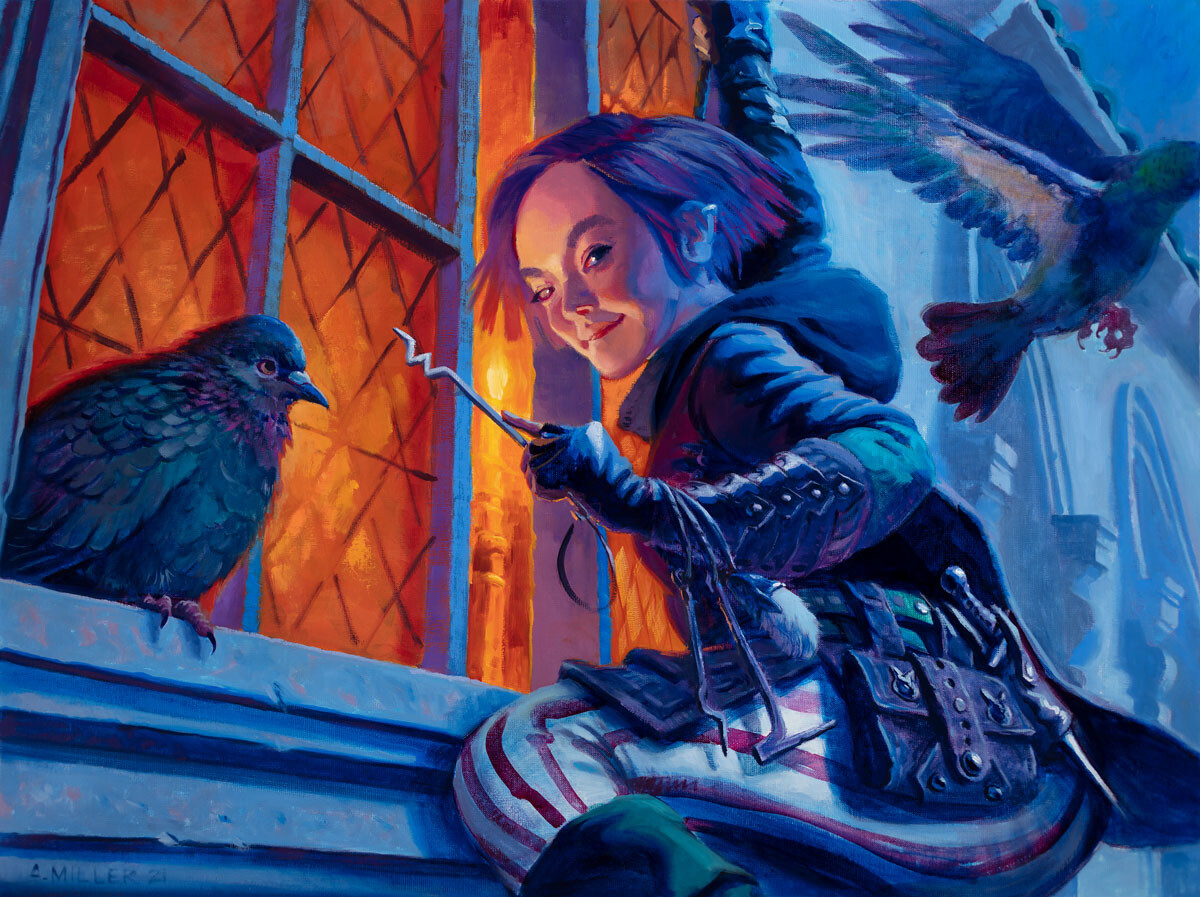 Alora's kit is simple, yet surprisingly flexible. While it might seem a bit underwhelming at first, since it's a combat ability in a multiplayer format, it only targets one creature, and we have to bounce that creature back to our hand at our end step. However, upon closer inspection, there are a lot of ways that we can capitalize on this snazzy and subtle effect!

The most obvious interactions with Alora are, of course, creatures that benefit from the evasion, like Infect or Ninjutsu creatures. Playing around with Backgrounds is super fun and gives us color flexibility for these archetypes, but overall, the pool on each of those specific strategies still feels limited, for some reason.

The second part of her triggered ability is the thing that caught my eye. It turns out that it's actually really easy to leverage Alora's 'downside' into a strength! Bouncing our creatures can be extremely versatile! We can use it to re-trigger enter-the-battlefield effects, for instance, or invest in Act of Treason effects to steal, attack with, and subsequently bounce our opponents' creatures. We can also avoid bad end-of-turn triggers, like Sneak Attack, Purphoros, Bronze-Blooded, or Ball Lightning effects. The possibilities are endless!

So what did I decide to try with Alora? Let's get to it!

Let's get straight to the point: Far Traveler is an incredible Background to pair with Alora. First, it gives us the option to keep the creature that we targeted with our commander, because we can stack the end step triggers so that Far Traveler blinks the creature first. When it re-enters, it's considered a new game object, and Alora's ability won't affect that creature anymore!

Second, it allows us to get even more value out of our ETB triggers. Blinking creatures to get tons of extra effects is tried and true for white and blue, which means we have a lot of tricks to work with. In fact, while looking through cards, I realized there's a tribe of creatures that would make this deck really hum along nicely, and it has the bonus of making the deck even more D&D themed: Wizards are perfect for this strategy, because they're moderately cheap, have plenty of useful ETB effects like removal and card draw, and they'll benefit from a constant source of unblockability.

The blue side of our deck resembles a somewhat run-of-the-mill Wizard tribal list, with lots of card draw and utility-based threats. Naban, Dean of Iteration is one of the archetype's cornerstones, as he's cheap and allows us to go over the top pretty fast. Cheap creatures, like Faerie Seer, Overwhelmed Apprentice, and Sage of Epityr, are solid early plays that can be bounced back to our hand as a cheap way to fuel some of our favorite cards, like Rumor Gatherer.

Watcher for Tomorrow is a powerhouse in this deck and plays well with our Background, constantly digging out tons of extra cards for us. Cyclone Summoner might be a bit wonky at times, especially when it ends up bouncing our Background and commander (ouch), but it's still a one-sided board wipe that can be used more than once throughout a game. That 7/7 body is also no joke with Alora.

Our support suite feels pretty different than most Wizards builds out there! We're trying to gather as much power as possible to make a single threat hit hard, but without committing to the usual Aura/combat tricks that characterize an evasive strategy. Those don't play nice with our commander pair, but pure power helps make any of our creatures a threat. Door of Destinies is a powerful damage boost that grows pretty quickly when combined with Alora's play pattern, since we'll be able to cast and recast a lot of cheap creatures over and over.

Kindred Discovery is even more busted, granting us tons of triggers when we attack, recast, and blink our various creatures. Azami, Lady of Scrolls is a personal favorite, since she plays extremely well with our Background, always allowing us to get a tapped creature for Far Traveler, as well as letting us 'double dip' when that creature comes back untapped. (Remember, Azami's ability doesn't care about summoning sickness!)

White might not be a conventional Wizard tribal color, but I think it has plenty to offer to the archetype. Reflector Mage and Deputy of Detention are a solid removal duo with abilities that mono-blue doesn't usually have access to. Elite Guardmage is a great three-for-one, and getting multiple ETB triggers can help us stabilize an otherwise lost game. Rumor Gatherer is an impressive newcomer that feels like it was tailor-made for the archetype, given how easy it is to trigger its ability twice.

While these are good additions to the archetype, the main selling point in white isn't its threat potential - it's the support that the color provides. I mean this both in terms of offense, with anthem effects and other combat tricks to help us pack a bigger punch, and the extra blink support, which synergizes extremely well with our gameplan.

For instance, on the offensive front, Duelist's Heritage is a great card when combined with our commander, allowing our threats to scale pretty quickly. Dictate of Heliod plays well with some of our instant-speed interactions, and turns a tribe that every expects to be tiny into an evasive, meaningful chunk of damage. Our Bakcground covers a lot of our blinking needs, but we can also enlist cards like Galepowder Mage and Mistmeadow Witch, which are great, tribe-relevant options. Oh, and who could forget the classics? We love to play Cloudshift, Ephemerate, and Eerie Interlude.

Since both of our commanders cost three mana, we're mostly looking for a couple of solid early ETB Wizards in our opening hands. One-drops are especially desirable, because they curve out pretty well with our Background. Frankly, our early game is quite busy. Between playing our commander, our Background, and mana rocks/early Wizard drops, the deck tends to have a smooth transition to the mid-game without many difficult choices.

The mid-game is usually when our lines start getting a bit more complex. We have to carefully choose which creature to target with Alora, and whether we want to blink it with our Background to get the instant value and keep it in play, or else let it bounce back to hand to cast later, and target a different creature with our Background for a different ETB trigger. If we make these choices carefully, we can set ourselves up for a really good late-game. We get tons of value from all our creatures flitting in and out of play, and lots of these creatures provide tons of extra utility, allowing us to grind through almost any board state. Repeating their ETB effects keeps us safe, and our evasion and pump effects transforms them into lethal threats, so our opponents won't have to suffer long!

Any list can be improved upon, so I always like to suggest other directions you could take this idea if it strikes your fancy. Mixing Wizards, enablers, and payoffs isn't an exact science, and this ratio may vary according to personal preference. Even adding some more combat-oriented threats, like Augury Adept, can change how the deck plays. With all the different moving parts, it's a bit hard to find slots to add creature recursion, but I'm sure many players out there would love to add more into the 99! If I may be so bold, Sevinne's Reclamation could fit right into a deck with this many three-drops!