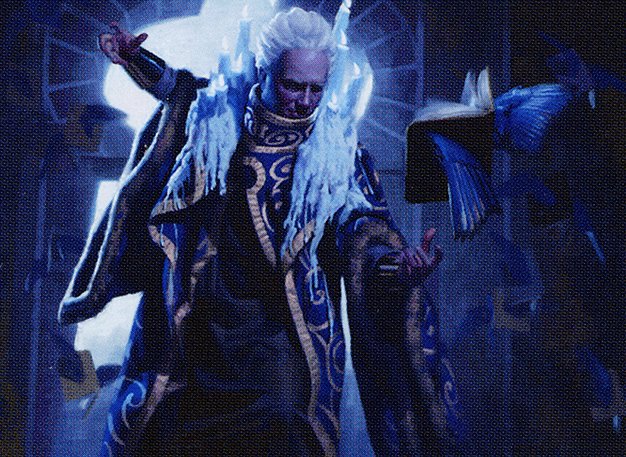 Let's take a look at Gadwick, the Wizened.

Gadwick is a powerful commander. It has a strong ETB and has a triggered ability that can be quite useful, and both of these effects give Gadwick that "damned if you do, damned if you don't" quality that's often seen on some of the most powerful commanders out there. This combination of effects also covers one of the biggest downsides of playing an X-cost commander, namely the cost of actually playing it; an ever-increasing mana cost means we'll draw fewer cards from Gadwick's first ability, but that second ability puts in enough work that we don't feel like we're losing value even if we cast Gadwick without drawing any cards at all.

However, Gadwick does have a deckbuilding cost attached to him. Running a large suite of cheap blue cantrips is an absolute must for us to continually tap our opponents' creatures, and this deckbuilding 'restriction' eats away a decent chunk of space in the 99, which makes it harder to build around various deck archetypes. Another awkward thing about his triggered ability is the necessity of instant-speed cards to play defensively (which is arguably the best way to use it), which limits some deck archetypes even further.

Commanders with a strong ETB are a bit of an all-or-nothing proposition. On the one hand, having a good ETB effect can be oppressive in EDH games, because it causes the deck to bend toward blink effects, and when the ETB effect is too good, we end up with a Golos, Tireless Pilgrim situation. On the other hand, some ETB effects are a bit lackluster and don't pack that much of a punch. Gadwick's ETB is very powerful, but it definitely falls into the second camp, because we can't blink or flicker him to re-trigger that effect. We only get that payoff when he's cast.

So how can we give Gadwick a fresh new spin?

With the new Kamigawa: Neon Dynasty set, we now have a solid 12 mono-blue Ninjustsu creatures, which are surprisingly great with Gadwick's kit. Hear me out: while Gadwick is out, every blue spell we cast can tap a potential blocker, making it easier for us to use Ninjutsu. We exchange Gadwick for a Ninja, returning him to our hand, and next turn we can cast our commander again to draw a bunch more cards! This is a very powerful engine once it starts rolling.

The mono-blue Ninja suite is surprisingly good, too, providing solid little perks like card draw and mana acceleration. Prosperous Thief is a powerful mana-ramping tool that can get pretty out of control with cards like Sakashima's Student or Mist-Syndicate Naga. Ninja of the Deep Hours,Moon-Circuit Hacker, and Higure, the Still Wind are extra ways to draw cards, which Gadwick mostly has covered already, but it's still a nice upside. Mistblade Shinobi and Moonsnare Specialist are tempo-focused removal, which might help us maintain a board state where we can slip our threats through.

Since we're already trying to pay lots of mana for our commander, why don't we fill out the rest of the 99 with a 'hyper-mana' type of strategy? Cards like Gauntlet of Power, Caged Sun, and Extraplanar Lens allow us to generate a lot of mana with our lands, allowing Gadwick to draw us even more cards and find even more mana-doublers! Jin-Gitaxias, Progress Tyrant is a powerful new addition that not only helps us accelerate in a way that wasn't possible before, but it also provides a solid defense while doing so. Ulamog, the Ceaseless Hunger is a powerful clock that immediately exiles two problematic permanents. Icebreaker Kraken helps us lock down our opponents' boards.

Aside from having our commander as a target for the Ninjutsu creatures, we have a few good ETB creatures we can bounce back to hand, too. Pilgrim's Eye and Solemn Simulacrum are terrific Ninjutsu targets to recast over and over, especially in a deck that wants every land drop it can get, to use for all those mana-doublers. Treasure Mage allows us to find Caged Sun (among other goodies), which can accelerate our gameplan if it sticks. Attacking with Ulamog and then getting it back into our hand to cast it again has got to be one of the most memorable plays of the night! Agent of Treachery can become quite the headache if we get to the point of triggering its end-of-turn ability.

To supplement our commander, we're using what I call a "Gadwick suite", which are cards that are mostly there just for our commander, rather than for the other cards in the 99. Panharmonicon is great in any deck with so many powerful ETB abilities, but doubling Gadwick's draw just makes our mana that much more effective. Hullbreaker Horror is a really good tempo control card that can effectively act as a second copy of our commander when we need to clear blockers. Isochron Scepter is a reliable way to constantly get trigger our commander's second ability, and if we ever get a High Tide under it, it's just crazy.

For our opening hand, we're mostly looking to start off with some early spells to trigger our commander and a Ninjutsu creature. Mana rocks are good, but not necessary for an opener, because our mana curve is very unusual in this deck, especially with so many cantrips greasing the wheels.

In the mid-game, we should be looking to get a mana multiplier effect like Caged Sun so that we can start snowballing. By this point, it might be hard to get through multiple blockers, but if we're already established, it's not that big of a deal.

Getting to the late game is usually not a problem; we have a lot of draw power and our top end is quite strong. Additionally, many of our threats are very hard to remove once we stick them in play, like Ulamog, the Ceaseless Hunger or even Jin-Gitaxias, Progress Tyrant. Keep recasting our commander, use it to tap down offenses and defenses, and annihilate enemies with immense and self-protecting threats!

While this type of big mana is powerful, there might be other shells more suitable for this type of strategy, should you choose to keep experimenting! Going for a more tempo-oriented build might get more mileage out of our smaller creatures, and we can even try building around some tribal synergy. There are a lot of other ETB commanders that might benefit from all these Ninjas, too. For instance, Gyruda, Doom of Depths is a powerful commander that has the benefit of being just in the right colors for both getting unblockability and having a wider array of Ninjutsu creatures.