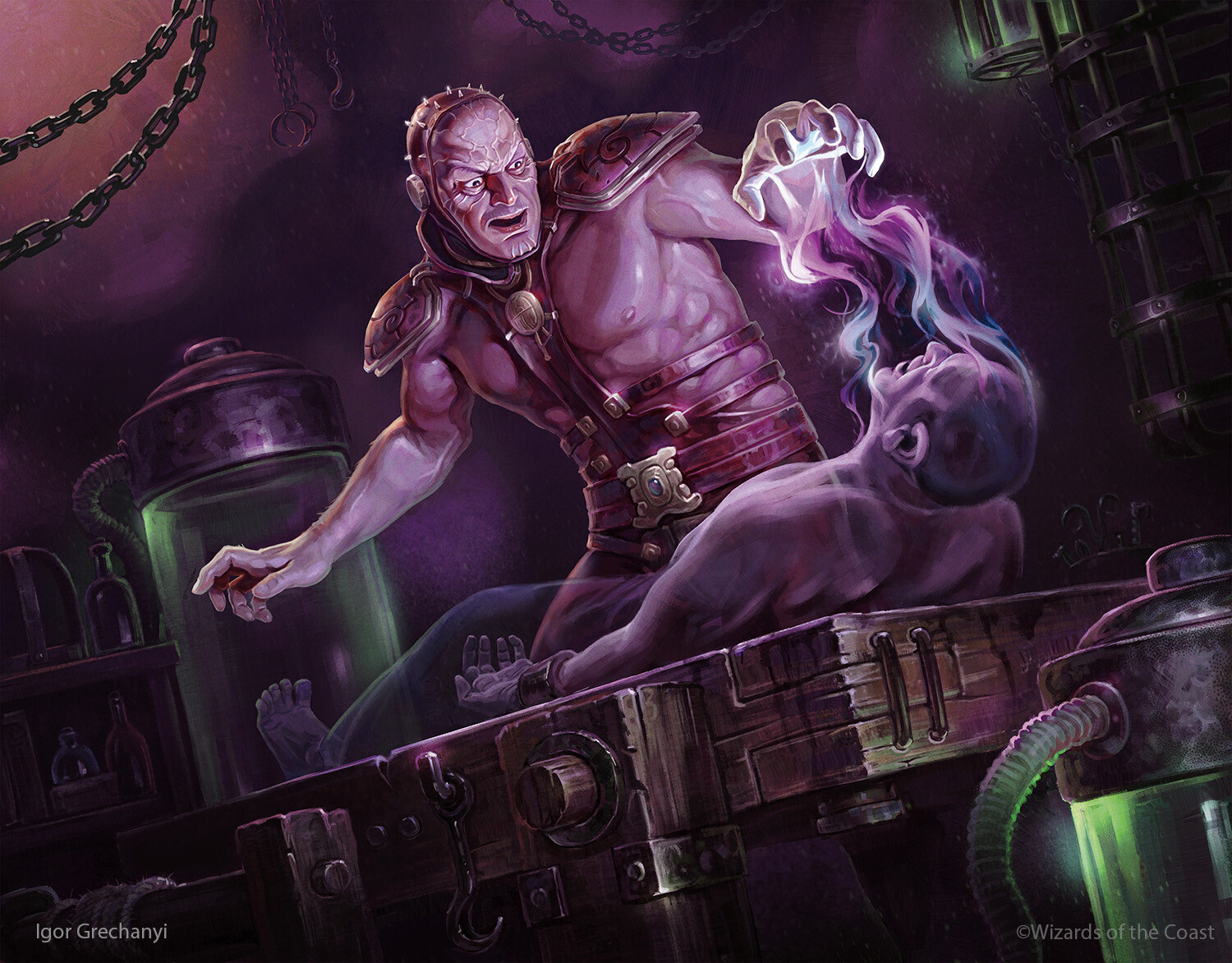 Jon Irenicus is a fun take on Dimir Politics, where we give out "loans" to the rest of the table and collect the profits during the following turns.

There are a few different ways to build around this kit. Creatures with unwanted effects, such as Master of the Feast, are great to pass around. Alternatively, we could invest in passive token-makers, like Thopter Spy Network, and not have to worry about playing a creature. We could even make our opponents do our dirty work for us with by playing Infect creatures, which become a sizeable threat with the two +1/+1 counters and the pseudo-haste that we get.

While the first part of Jon Irenicus's kit is the fun aspect of the card, the draw trigger is where most of his power comes from. This ability is pretty easy to trigger, as the creature only needs to attack, so it's very quick to snowball out of control.

With that being said, there are two main issues with Jon Irenicus: the first is the tempo loss for spending mana to give a threat to an opponent, and the second is the aftermath of our gameplan, which is the awkward position that we're left behind when the 1v1 scenario comes around.

We don't get symmetrical effects that hit all players like we used to (and for a good reason). Usually, they lead to feel-bad situations where we can get blown out by our own card's effect. However, given that our commander wants to pass around creatures anyway, why not use symmetrical designs to our advantage? Relentless Rats is the perfect card for this type of strategy, since it has a built-in global growth effect and, like any non-singleton strategy, they appreciate the draw support that Jon Irenicus provides.

We have a split between tribal and non-singleton support. Since our threats have an inherent anthem effect, we don't need that many straight power boosts, so having a suite that provides evasion and more cards is crucial for our success (though our commander helps a bit with the latter). Marrow-Gnawer and Cover of Darkness are efficient sources of evasion that affect our opponents' Rats as well. Kindred Discovery acts a bit as the opposite of our commander: it draws us cards for when we attack with our Rats as opposed to when someone does it for us. This kind of coverage helps us avoid some feel-bad situations where we must wait for someone else's turn to draw. Thrumming Stone is a powerful card for any non-singleton list and can be a great way to recover after getting blown out by removal.

While strict power boost cards aren't exactly what we're looking for, there are still a few cards that stand out. Coat of Arms makes every Relentless Rats at least twice as effective, which turns them into an even faster clock. Mirror Box isn't as explosive as Coat of Arms, but by only affecting our Rats, it's especially useful when it comes down to the 1v1 situation.

Clone effects, while a bit on the win-more side of the spectrum, can be an efficient way to get a different kind of card without diluting our deck too much. Reflections of Littjara is a powerful payoff that negates the biggest drawback from our commander: giving up a creature every time we pass them. Mirror Image is, effectively, a two-mana Relentless Rats that can come out as another creature on the battlefield in a pinch. Quasiduplicate is a bit blue-heavy and costs as much as a Relentless Rats, but it's very card-efficient and gives us two Rats after the Jump-Start.

Our deck is pretty consistent, since we have 38 of the same card. We're trying to cast a Rat on turn three and our commander on turn four, so any hand that has three mana and just one blue source is functional enough to work. Once we start getting things going, we need to be able to read the table to know how we're going to use our commander's ability to get ahead in the game. Spreading out our creatures might be the more politically neutral approach, but often we have to focus on a problematic player that all our Rats will be pointed towards.

By the mid-game, we should have access to one of our payoff cards and can start doing some real damage. We usually can grind a bit against board wipes since we have our commander to make up for our losses. However, we should still avoid overcommitting once we have a reasonable board state.

The later stages of the game can be a bit tricky because we need to have a certain number of Rats to be effective, and, as the game goes on, it gets increasingly harder to recover each board wipe. That being said, we still have some great cards to help us fight against this, like Phyrexian Reclamation, which isn't exactly the faster card out there, but it gives us a steady flow of threats to play.