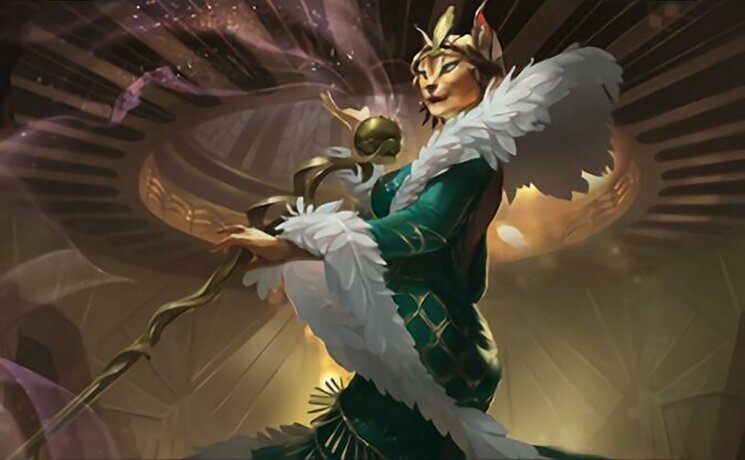 Kitt is an interesting take on Naya politics, one that rewards going (a bit) wide and hitting hard. On the one hand, being able to activate every turn can be very powerful. However, it does have its obvious restrictions: only being able to do it once a turn makes it harder to make an impact, and having enough creatures to tap can be a challenge.

One thing that Kitt has going for her is the ability to have consistent, on-demand, targeted goad, which has plenty of uses, such as accelerating the game clock, forcing key creatures into bad attacks, or even clearing out blockers for an attack.

Kitt relies on her targets, so it's only natural to consider this as our main starting point. Infect creatures appreciate this bump in power and the evasion, but I think it's a bit too on the nose. Instead, today we're going to double strike our way to victory. Double striking creatures are hyper-scaling threats that tend to be great both offensively, for their double damage, and defensively, because they hit other creatures first, which makes them excellent targets for our commander. Another benefit of using creatures with double strike is that our commander helps us do some extra damage by using her ability on our opponents' creatures, which isn't possible with a deck that operates on such a different axis like Infect does. The final upside of using double strike over Infect creatures is that they aren't contained in a single block, which means that we have plenty of options to choose from.

While most of our creatures are vanilla creatures with double strike, a few are worth mentioning. Adorned Pouncer is a great threat throughout the game, being an early double striker that can be replayed later on for some smashing. Blade-Blizzard Kitsune is an interesting addition, on the surface having Ninjutsu, which might not seem all that useful, but with the number of mana dorks and incremental tokens that we produce, they can help us "haste" it into play. Fabled Hero and Illuminator Virtuoso are excellent growing threats that get out of hand very quickly, and God-Eternal Oketra is a tool for grinding removal-heavy games and it can also take over the game if left unchecked.

Our pump suite is designed to be fast and hard-hitting; we're forgoing some of the usual synergies that shells like these tend to have, like Aura, enchantment, and Equipment support, to help make us go faster. Spells like Brute Force, Built to Smash, Infuriate, and Titan's Strength are cheap pumps that provide a degree of consistency that is important in an aggressive shell like this. Madcap Skills and Rancor provide a lot of power for cheap mana investment and on a permanent base nonetheless.

Protecting our threats is especially important, and as such, we need to have a proper suite of cards to keep our stuff alive. Hyena Umbra and Spider Umbra are cheap proactive protection pieces that allow us to have some peace of mind while we develop our board. Valorous Stance is a flexible protection spell that can also work as a removal spell in a pinch. Ajani's Presence can target multiple creatures and even leaves them a counter afterward.

Our mana ramp suite is mainly mana dorks. They're a very cheap source of mana acceleration, which works perfectly, especially since they allow us to cast our many three-mana threats on turn two. They also work great together with our commander, who appreciates having extra bodies to activate her effect more frequently.

Haste enablers are extremely important for aggressive decks like ours. Samut's Sprint and Reckless Charge are a great way to get a creature going ASAP, and they're effective enough to be worth playing even as just a power boost. Rhythm of the Wild provides Riot to each of our subsequent creatures, which can be quite devastating in the right conditions. Samut, Voice of Dissent is a threat that also works as a haste enabler, providing a solid beater that can be played quite safely at instant speed.

For opening hands, we need one or two threats and some way to start pushing damage through. Sequencing in the early game is crucial to our success. Starting at turn two, we can deploy a double-striking threat or two, and by turn four, we're probably ready to play Kitt. We actually have a very similar play pattern to a Voltron deck, because target selection is a key aspect to make our deck work well.

By the mid-game, things'll be sketchy if there are too many board wipes going around, but if we play it safe with our haste enablers, we could circumvent that problem altogether. This is where we have an edge over traditional Voltron lists; by having our threats spread among many creatures, we can better suit our deck to grind things out over time.

Note that our deck isn't exactly well suited for a late-game scenario. We don't want to reach the late game at all. Kitt Kanto's double strikers need us to go fast, so plan the early turns appropriately.

One area that our deck is a bit lacking is card draw and recursion for grindier games. These cards can slow us down in a 'goldfish' sort of way, but they are a necessary consideration in many environments. Potential alternate build paths could focus more on having late-game helpers. Our deck's support suite was designed to be fast and streamlined, but we could opt into other synergies too, whether it's with Auras or Equipment, to give the deck another angle of attack. Choosing which way to go is entirely personal.

I mentioned it before, too, but Kitt Kanto really could make for an awesome Infect commander. Infect has the added benefit of Proliferate to help offer a noncombat way to finish off our opponents.