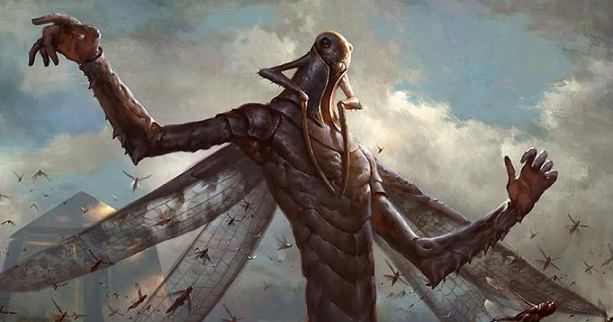 Good morning, EDHREC! I’m Bernardo Melibeu and this is Epic Experiment, a series where we throw all common sense aside and experiment with some unusual cards, effectively changing how we normally build our decks. Is it going to work? Who knows?! We're making science here. When you're an Izzet mage, blowing things up in front of your own face is half the fun.

In this article, we're going to look at one of the three Gods from Hour of Devastation, The Locust God.

First, we need to understand our commander, so let's take a look at its abilities:

Whenever you draw a card, create a 1/1 blue and red Insect creature token with flying and haste.

2UR: Draw a card, then discard a card.

When The Locust God dies, return it to its owner’s hand at the beginning of the next end step.

With that in mind, let’s go to The Locust God EDHREC page and see how folks normally build him.

We can see that the most popular cards are wheel effects (like Windfall, control spells (like Counterspell, combo pieces (like Ashnod's Altar, and effects that draw cards on combat damage (like Coastal Piracy). This shows that the average deck is very proactive, relying on the explosiveness of wheels to quickly find certain cards, and making an army of tokens in the process. They are also very fast once their engine gets going.

We now know how the community sees The Locust God. So, let’s see if we can build something unique!

To contrast the general speed of the average list, we will slow down and take a more control approach. The first card that comes to mind is Smokestack.

“Woah! What is that card doing here?” you ask. "See how it synergizes well with our commander?" I respond. We naturally create hasty tokens, which we can attack with then feed to our Smokestack. This is a way to break parity, which is one of the most important things in a Stax deck.

”I’m still not convinced, why are we playing Stax?” Stax is a form of proactive control, just like discard effects. It is different than the conventional 'draw-go' control, which patiently waits and waits, doing nothing each turn until it needs to react to an opponent's game action. This kind of deck works well in 1v1, but in Commander, there are three other players, making almost impossible to keep up with mana and cards. To stay even, we need to commit something to the board and let it accumulate value. Stax effects are therefore perfect for it.

”Even though they are usually played in more competitive pods, we can adapt our lock pieces to a more casual environment. Meekstone and Cursed Totem are ways to cripple creatures. Opposition taps all those pesky permanents, Blood Moon punishes greedy manabases, and Propaganda and Crawlspace make the table think twice before attacking us. Speaking of defenses, Frozen Aether slow down hasty attackers and problematic artifacts, and Overburden will slow down creature-based decks. For our necromantic opponents, Silent Gravestone and Relic of Progenitus are great ways to stop graveyard strategies while still replacing themselves. Finally, Stranglehold which hoses many ramp- and tutor-heavy decks. These pieces are not ultra-competitive so much as they stop others from being ultra-competitive.

We started to have an idea of how the deck feels. Given how this deck plays, that aforementioned 'wheel' theme just won't play well with our control/Stax plan, even if wheels do have strong synergy with our commander. We need to be able to plan ahead, choosing carefully which lock pieces to deploy and which threats to counter, and that’s generally not possible with the wheel game plan, so we need to remove it.

Now that we have our game plan ready, we need to think about win cons. Our commander is a great starting place. First, he can quickly make an army of tokens. Second, he's a mana sink. Third, he avoids commander tax, making him a near-constant presence on the battlefield. So let’s break our victory down into two categories: infinite combo and token swarm.

The first category is where the Johnny in me truly shines. Skullclamp is already a must, so how about pairing with Ashnod’s Altar? It’s not a surprise that these combo pieces are included in 87% and 69% of all Locust God decks, respectively. Both pieces are good on their own and together, while they don’t necessarily end the game, they put us so far ahead that it’s just a matter of time.

The last combo that caught my eye was a 'Four Horseman' style loop involving Blasting Station and infinite draw. After making infinite mana with the 'Dramatic Scepter' combo (Dramatic Reversal + Isochron Scepter), each time we activate our commander's loot ability, we create a token, which untaps the Blasting Station. Then we can sacrifice the token to activate the station. In order to one-shot the whole table, we need to do this loop 120 times (40 life × 3 opponents), so how do we do that without milling ourselves? That’s simple! Any of the original Eldrazi titans will do. Kozilek, Butcher of Truth and friends reshuffle your graveayrd into your library whenever they're put into the bin, so now we have an infinitely large library to draw cards from!

The second category, token swarm, is not our Plan A, but is still very important. Alone, it's very slow and easy to see it coming, but since we are trying to win in the late game, those small bits of damage across the board here and there with our tokens adds up, and eventually makes our small army very lethal. There are many popular cards that we can add to assist, such as Bident of Thassa, Impact Tremors, Purphoros, God of the Forge, and Shared Animosity. Because we are trying to be a control deck, we can't afford to have many slots dedicated to this swarm strategy, so it's very important that when we deploy our threats, they stick. Because of this, Purphoros, God of the Forge is a perfect fit; we have very few red mana symbols among our permanents, which mean's he'll never be a creature and will thus be almost impossible to remove.

For honorable mentions, we have Firemind’s Foresight, Trophy Mage, Whir of Invention and Muddle the Mixture. They are the glue that will tie this list together. Firemind’s Foresight is the most important of the four. With this, we can make many game-winning piles, such as Whir of Invention, Dramatic Reversal, and Swan Song. This combination allows us to untap and win the game at instant speed by fetching Isochron Scepter for the Dramatic Scepter combo (though I should not we also need enough mana rocks on the field too). These cards are just all excellent tutors. Trophy Mage gets both Ashnod’s Altar and Blasting Station, Whir of Invention can grab any artifact, and Muddle the Mixture can transmute into either piece of the Dramatic Scepter combo.

Now, all we have to do is add a card advantage, ramp, and a removal suite, and there we go! We have our first Epic Experiment!

With this mixture of proactive and reactive cards, we are able to take a more methodical approach, slowing down the rest of the table while we assemble our win condition. Despite this slower tempo, do not underestimate our ability to go off; if we do, it’s very explosive.

We should slam our general as soon as we get six mana, as he provides both early game defense and late game dominance, and there is almost zero risk of him dying. Be careful of counterspell-heavy decks and exile-based removal (usually in white decks) while casting your commander. Each game is different, so our priorities should change according to what we're playing against.

The early game is where we are the most vulnerable, so we should either develop our mana through artifacts or else draw lots of cards in order to do the former. We shouldn’t rush our combo pieces, especially without a way to protect them. The same can be said about most of our lock pieces. Meekstone is a strong card against 'go big' decks, but casting it on turn one won’t help us and will just draw unwanted attention.

The mid game is hard to operate, because now we have a wide array choices, which could lead us into failure, should we make the wrong one. This part of the game is where we should drop the lock pieces, but also keep counterspells (or bluff) to protect ourselves. As I said before, The Locust God usually can be played on six mana. The tokens are expendable and will absorb much of the aggro folks point our way. This is where we start looking for possible combo paths. As a warning, the later part of the mid-game is usually where our lock pieces get destroyed, which is not the end of the world, as long as they gave us the time we needed.

Now, the late game is where the fun really begins. Because of the lack of wheels and big draws, we may be running low on cards, but not to worry! There are many ways to refuel, and worst case scenario, we can loot dead cards with our commander. At this point, one haymaker is all we need to take over the game. Cards like Commit // Memory, Purphoros, God of the Forge, and Opposition start to shine, and even Ashnod’s Altar can help us dig for what we need. Most of what we want to do now is instant speed, and that give us an advantage over the rest of the table.

This list is far from perfect, and that are many ways to better adapt this to your meta. That, to me, is what makes tuning a deck so much fun: there are so many choices. For example, if your playgroup doesn’t like infinite combo, take out the Blasting Station loop and add cards that speed your clock, like Shared Animosity. You could even use a Divergent Transformations package of your choice, transforming your tokens into amazing creatures. Just remember to remove all creatures in your deck but two, so you're guaranteed to flip exactly those two powerhouses. In my case, I'd go with Purphoros and Jin-Gitaxias, Core Augur.

From C18, I can also see one obvious addition: Ever-Watching Threshold. Our commander can make tokens from it, it discourages some early aggro, but most importantly, it draws cards!

That’s it for this Epic Experiment! Please feel free to write any suggestion in the comments section. As mentioned before, this list isn’t set in stone and it's highly experimental. Do you have any questions about the list? Which cards did you like? Which didn't you? Was the Epic Experiment a success? Let me know!