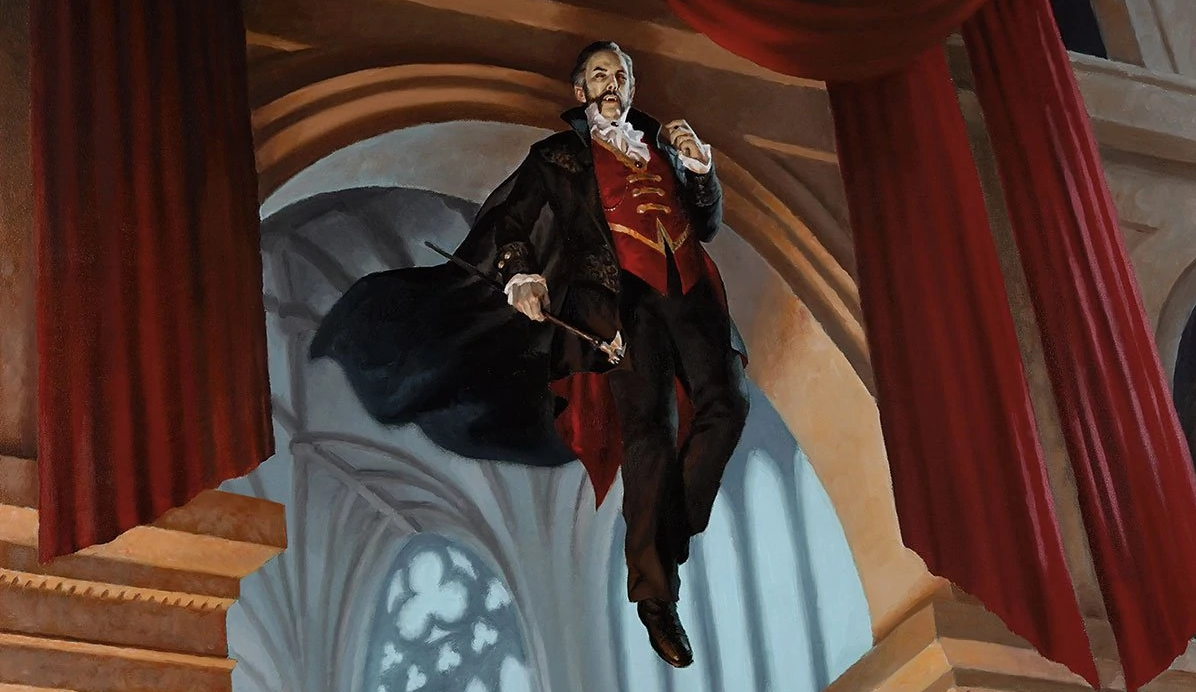 Blood tokens, like Clue tokens, are a super fun mechanic! Creating a bunch of useful artifacts is great, and there's a lot that we can do with them, such as using them to fuel graveyard-matters strategies or artifact-based strategies. The color pairing of BR is perfect for these types of artifact-token strategies, so having a commander that generates a ton of them is a very solid starting point. It's worth noting that this ability only triggers at the end of our turn, which means that many traditional 'punisher' effects in red don't directly interact with Strefan. However, some of them can allow us to ping ourselves for that fourth token.

Strefan's attack trigger is just as powerful as his first ability, allowing us to cheat Vampires into play. If you ever played Standard when Sorin, Imperious Bloodlord was legal, you know how strong cheating a Champion of Dusk can be in the right shell, and with the whole Vampire pool to choose from, this type of ability is even more powerful. With enough support, it's very easy to consistently hit people without much mana investment. As if that isn't impressive enough, we can also build around type-changing cards, like Conspiracy, and use this ability to cheat out any creature that we want!

All in all, Strefan is an interesting build-around commander that has a lot of potential even outside of his intended tribal shell.

One of the many upsides of having so many cheap discard outlets (Blood tokens) is the ability to set up our graveyard. [elDragon's Approach[/el] is a great enabler for a Dragon-tastic strategy, one that also gets enabled by Strefan's ability. Damage means Blood, Blood means filtering, filtering means a bigger yard and more toys to play with. This duo synergy makes for a consistent strategy, where one part sets up our draw, while the other acts as our finisher.

Let's talk about Dragons. In a shell that pumps out this many artifacts, Hellkite Igniter becomes a fast clock, especially since we can often get it into play for three mana with Dragon's Approach, leaving more mana aside for us to use that pump effect multiple times! Hellkite Tyrant can also be a reasonable win condition, since we'll make so many artifacts with our commander! Even when we can't threaten to win the game with it, we can still use it to steal our opponents' artifacts, and it's always useful to acquire more utility artifacts and mana rocks. Knollspine Dragon is a great target for when we're trying to recover, as our deck already tends to deal consistent damage to our opponents, and Utvara Hellkite is a good mid-range option for when we want to get value across multiple turns.

Our Dragons are good at dealing huge bursts of damage, but they're not all able to one-shot an opponent, so we also have to set the stage for their arrival by lowering enemy life totals before any winged beasts arrive. One effective way to help lower everyone's life total is to play a few hate pieces that provide a constant clock to our opponents. Cards like Ankh of Mishra, Burning Earth, and Manabarbs are a good way to punish players for going bigger than us. Harsh Mentor and Immolation Shaman are great at slowing down some specific strategies, such as Aristocrats, while also being generally useful for minor punishments here and there, and Rampaging Ferocidon and Sulfuric Vortex are great ways to ensure that all of our damage is permanent. Even if some of these cards don't always reliably trigger our commander's Blood generation, they work great at controlling the pace of the game.

Besides Dragon's Approach, we still have some 'poking' effects to trigger our commander as much as possible. While their damage output will be severely limited, their main purpose is to make sure that we're able to continue getting Blood tokens even while developing our board. Firebrand Archer and Kessig Flamebreather are solid creatures because they're cheap enough to be played on curve with our other Slug pieces (and our commander). Triskaidekaphobia is a bit on the expensive side, but it more than makes up by allowing us to get the full four tokens every turn (and it can even act as an alternative win condition).

Strefan is one of those commanders that benefit greatly from having a dedicated support suite. Oni-Cult Anvil is a great artifact, providing a constant stream of bodies and life that helps us get around aggression. Dragonspark Reactor works very similarly to a Fireball, but it has the benefit of growing in damage without having to invest mana. Glint-Horn Buccaneer and Reckless Fireweaver are fast sources of chip damage, which, unlike the aforementioned sources, have the benefit of being either cheaper or more effective than their competition. However, they do tend to be a bit more unreliable when it comes to triggering Strefan's ability, so watch out for that!

For opening hands, we're mostly looking to start creating our precious Blood tokens ASAP. This means we're trying to get our commander out as soon as possible. In the early game, we need to set up for our commander, either with ramp or an early damage enabler, like Kessig Flamebreather. We'll be set once we start creating Blood tokens, so we shouldn't be afraid of sacrificing a few to dig for more cards.

By the mid-game, we should be very close to triggering Dragon's Approach, and we may even use Blood to get some extra Approaches into the graveyard early to help us hit their threshhold as quickly as possible. Choosing a good target for the first Approach payoff is key to maintaining pressure throughout the game. If we think our opponents lack removal, we can opt for Utvara Hellkite. If we have a few Blood tokens around, we can pick Hellkite Igniter. At this stage, the damage that we've done with our hate pieces starts piling on, so it's important to find as soon as possible a way to finish off some of our opponents - otherwise they might gang on us.

Our deck the explosive power found in many other strategies, so the late game can be challenging if we're in top deck mode. Try to keep up persistent pressure, and find an opening for a late-game Approach to shake up the table if you find yourself in a board stall.

Non-singleton decks tend to be a bit slot-intensive, so keep this in mind when adding new cards to this deck, or trying out a few tweaks to the list! Bladewing the Risen is a good addition to the Dragon suite, as it allows us to discard Dragons when we draw them without that much concern. Since we have a graveyard-based synergy and do a lot of looting, it isn't a stretch to want to include a few Dredge cards, either. A few of those might allow us to reduce the numbers of Dragon's Approach needed in the 99, since we can get four into the graveyard more quickly that way. Adjusting our Group Slug pieces is another fun way to give this deck some variance too, and there are tons of interesting punisher cards out there to choose from.