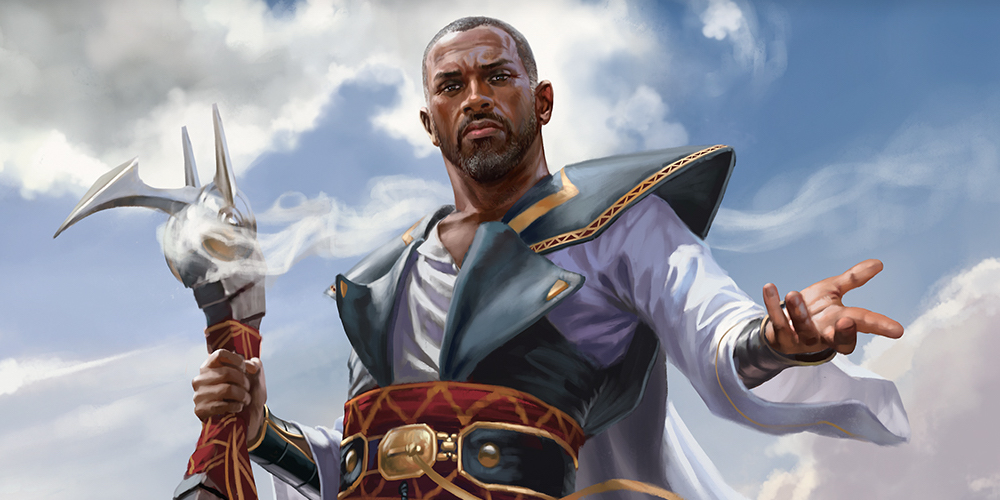 This is the first Epic Experiment of the year, so how about we start with something special? In this article we're looking at Teferi, Temporal Archmage. -1 Untap up to four target permanents.

-10 You get an emblem with "You may activate loyalty abilities of planeswalkers you control on any player's turn any time you could cast an instant."

He has a very steep mana cost for a nongreen commander.

His +1 helps dig for cards when playing combo.

There are a lot of nasty permanents that like being untapped by his -1.

He can used pretty effectively as a ramp tool when combined with mana rocks.

His ultimate could be useful in a superfriends shell, although his color restriction may get in the way.

With that in mind, let’s head to Teferi's EDHREC page and see how he’s usually built: As we can see, he's a very competitive-leaning commander. Many of his slots dedicated to common blue staples, like Counterspell, Ponder and Cyclonic Rift. There's also a strong preference in tutors that directly or indirectly get The Chain Veil, as well as a bunch of mana rocks and stax effects.

I think Teferi wants to be in a combo shell, or at least in a deck with a combo finish. It's hard to compare anything with the The Chain Veil combo, since it only requires an easily tutored card, our commander, and a handful of mana rocks we were already going to play anyway.

With that out of the way, let's see what we can come up with. His -1 untaps four permanents. This number caught my eye because, as a huge sucker for Goblin Charbelcher (Belcher for short), it's the exact number needed to untap the Belcher and three mana (which means that we can shoot someone else). The math also checks out; if we play our commander when we have six mana, the next turn we'll likely have seven mana to cast and activate the Belcher, meaning that we could potentially kill two players on the spot.

At this point, some may ask, "But we're playing lands! Are we just going to leave the Charbelcher effect to chance?" Fortunately, we have Mana Severance to exile all of our lands from our library. The best part of this combo is that we get to kill one player and stack our library the way we want, granting us a clear path to victory the following turn.

While this first combo is sweet, we need some backup win conditions (or combos) in case our plan A fails, so we can still try to win. Going in deep on the 'cannon' theme established by the Charbelcher, I'd also like to try Aetherflux Reservoir. It functions like an upfront Storm card and it's greatly synergistic with the Belcher, since most of the tutors we're running can get both. We still need to Storm off to enable the Reservoir, and since we aren't playing Storm spells specifically, we need to find a way to cast a ton of spells. The Dramatic Reversal + Isochron Scepter combo is a great way to generate an infinite Storm and infinite untaps. We can also use those untaps to shoot someone to death without Mana Severance, or go crazy with The Chain Veil.

Now that we've established our win conditions, we need to talk about their support. Voltaic Key can untap the Belcher for one more round. Rings of Brighthearth can copy several key abilities, including The Chain Veil, Aetherflux Reservoir, the Belcher, and Teferi himself. This deck has two combos, and they both need different things to function. Normally, this would be a downside, since drawing half of two different combos doesn't help you win with either. Thankfully, that's not the case here, since our tutor suite is extremely flexible and the pieces we need for both combos are so similar to each other. This means that we can slow roll our tutors until we have one combo in mind.

Fabricate, Whir of invention and Tezzeret the Seeker can get any of the key artifacts mentioned above. Muddle the Mixture grabs any two-cost card, like Isochron Scepter, Dramatic Reversal, Mana Severance. Mystical Tutor gets most of the previous tutors, plus Dramatic Reversal and Mana Severance The same is also true of Spellseeker.

Since this is also technically a Chain Veil deck, we need multiple mana rocks that provide two or more mana to enable an infinite loop with our commander. We need to tread carefully though, otherwise we'll get into cEDH territory (which isn't necessarily the power level I'm aiming at with these cannons). Any of the following will fulfill the mana requirements for the loop: Gilded Lotus, Basalt Monolith, Thran Dynamo, Extraplanar Lens. We can also combo off with any two of Sol Ring, Hedron Archive, or Worn Powerstone.

Aside from that, the rest of the deck is pretty straightforward and consists largely of the standard mono-blue counterspells, draw spells, ramp, and removal packages.

For our opening hand, we need some ramp (preferably at the two-mana slot), a card draw spell or two, and maybe a tutor. We need to spend the early game developing and digging for a winning line. Mana rocks that tap for two or more mana should be valued highly because they help fuel multiple combos. We should play counterspells defensively, only using them when needed to protect our pieces.

In the mid game we should have some idea of how we're going to win. Remember that both of our combos require different setups, so once we commit to a plan, we shouldn't change it. We should only consider playing Teferi when there's not much board pressure from our opponents, though there are times where he can act as a ritual, such as when we have Rings of Brighthearth in play. We should also tutor for our combo pieces at this stage of the game, but we need to wait for either countermagic for back up, or having enough mana to play them in one turn, rather than individually committing them to the board unprotected. By the late game, we are probably one top deck away from comboing out. This is where being conservative with counters pays off. If we get to the point where we have the mana to play our combo pieces and hold counterspells, it means we're probably going to win. One thing to note is that, while both kill conditions require preparations, The Chain Veil is pretty much a one-piece combo if we meet the mana requirements, so sometimes, especially with an underwhelming hand, the answer is just to tutor it out and try to win from there.

This one was a more streamlined deck, so there isn't much that I would do differently. Since Chain Veil is so good, I felt that I had to include it, but this is a good card too exclude if you always feel forced to get it. Additionally, one could add protective cards like Fog Bank or Aetherspouts to help keep Teferi alive, but since we're so combo-centric, I don't think it will be very relevant unless we're playing him recklessly.