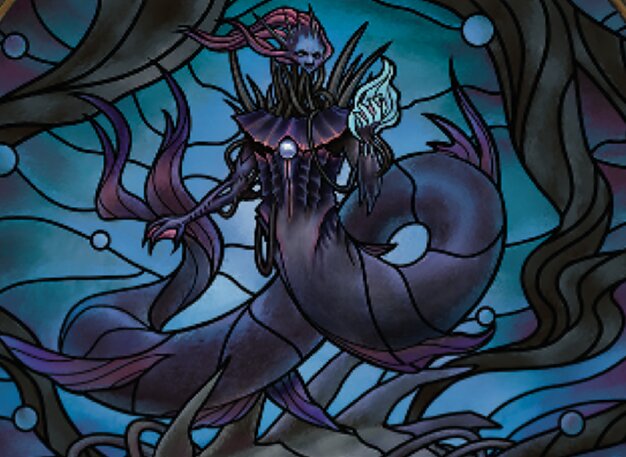 Vohar is a surprisingly powerful commander for its cost. In a way, he works very similar to Jace, Vryn's Prodigy, but we get a more front-loaded value effect from the Flashback effect in exchange for the flexibility of JVP's flipped side. The card filtering aspect alone can more than replace the need to play cheap cantrips, and while the ping damage won't make that much difference, gaining a few points of life can make the difference throughout a longer game.

The biggest draw to Vohar, however, is his second activated ability. The ability to play an instant or sorcery from the graveyard is very powerful and easy to build around. Even when going for a more 'goodstuff' type of build, it's possible, together with strong self-mill support, to build a toolbox that's just hanging out in our graveyard waiting for us to need it.

One of the most impressive things about Vohar is how both parts of his kits complement each other and his color combination. Reanimation decks, for example, get to Dredge away without the fear of milling a reanimation spell.

So, how will we give Vohar a twist?

I'm a bit surprised that we don't have all that many Gyruda, Doom of Depths Companion Vohar decks out there. This combination seems so good! They both straightforwardly complement each other, making up for each other's deficits.

The core of the deck (as is the case in many Gyruda lists) is Clone effects to duplicate the Gyruda effect over and over, constantly grabbing new copies to redo the effect and churn through tons of cards. Spark Double and Sakashima of a Thousand Faces may be the most important Clones because they allow us to keep more than one Gyruda on the board. Damage isn't our main gameplan, but multiple blockers or 6/6 attackers is a nice way to stay safe or eliminate players with damage if we need a backup plan. Undercover Operative's shield counter makes it a lot safer to pass the turn, which can help us go off when we untap, and Mirrorhall Mimic and Vizier of Many Faces provide value when they hit the graveyard.

Once we've triggered Gyruda a few times, we're ready to start phase two, which is to finish milling our opponents with the big mill spells that wound up in our graveyard from all the Gyruda milling. Cards like Maddening Cacophony and Cut Your Losses mill a ton of cards, and a big Mind Grind has a lot of variance, but usually does the trick. We're also packing Mesmeric Orb and Mindcrank as other mill sources, which are particularly useful to finish players off after playing our big spells.

It's often best to let Gyruda die to the legend rule to avoid leaving it open to exile-based removal. This makes it important to include some reanimation effects in the deck. Blood for Bones is a powerful effect that gives us access to two creatures, one to hand and one to the battlefield, and this can be used to put Gyruda safely into our hand to dodge graveyard exile effects. Ever After is a bit expensive, but the power-to-card ratio makes it a great option to top deck or to use our commander's ability. Persist and Exhume are cheap reanimation effects with a few small disadvantages, but given how our deck operates, we tend to either pass over them very quickly or just go over the top of their downsides (for instance, using Persist on a Clone to copy the Gyruda we already have in play).

With the amount of self-mill we're doing, it's important that we don't overwork our commander. Snapcaster Mage and Mission Briefing are copies of our commander's sacrifice ability, and they give us the opportunity to access our spells effect even without Vohar around.

In addition, Flashback effects are great ways to help us grind through some types of interactions. Card draw spells, like Deep Analysis and Memory Deluge, can help us dig for any other cards we need. Oh, and Army of the Damned is a neat opportunistic threat stored in our back pocket.

Our opening hands are very forgiving; we mostly just don't want to have many Clone effects. Between playing our commander and paying the Companion tax, we're pretty much tied up in the early turns.

Our first Gyruda trigger is a key moment in the game; most games we'll chain into a couple of Clone effects and keep one, but, if we hit any of our nonlegendary Clones, we can also gather a small army. Getting to untap with a Gyruda out can be pretty good, but we can always use one of our reanimation spells to get the chain started all over again.

Our late game is great, too! Between our commander and some of our graveyard recursion effects, we have a lot of potential for winning the attrition war. Just watch out for graveyard hate! That's the main way this deck shuts down, and losing access to Gyruda can be a challenge to overcome. As long as we stay focused, though, our commander and our Companion will help us 'even' the odds!