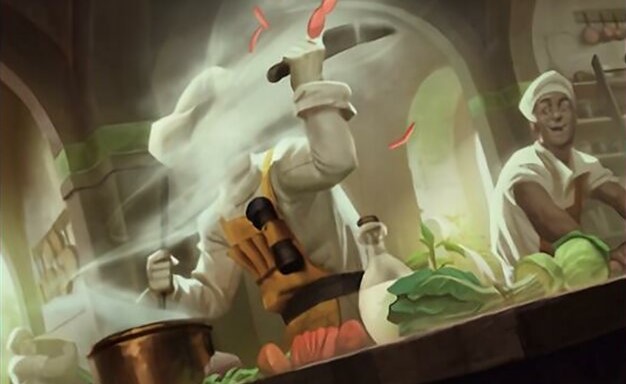 A Bite Out of Backgrounds

Just as a show has been resuscitated after a 10-year hiatus, so too can an EDHREC series!

Greetings, sleuths, saboteurs, and skulkers! Welcome to a random installment of Evasive Maneuvers, where we examine keywords and strategies that help get our creatures through during combat. In this surprise visit, I'll be attempting to cook up an evasive brew for a commander in light of the show Iron Chef.

For those who haven't seen the original, the newer, or the newest Iron Chef, it's an absolutely over-the-top show pitting highly trained chefs against one another in one of the famed "Kitchen Stadiums." Challengers typically select a renowned Iron Chef of their choice to battle head-to-head with. The chairman then reveals a secret ingredient, and both chefs must conjure up a five-course meal for a panel of discerning judges centering around that ingredient - all in under one hour.

It's equal parts hectic, chaotic, artistic, and beautiful. Think Battlebond, but in the kitchen.

As I've been binge-watching the new (new) Iron Chef, I found a lot of parallels with brewing with Backgrounds from Commander Legends: Battle for Baldur's Gate. In Iron Chef, each of the chefs must make five courses with a mandatory ingredient, the options for expression and avenues of flavors are endless. Similarly, the Background mechanic (like its predecessor, Partner) allows for some immense agency and creative expression when brewing. Each of the 31 "Choose a Background" legendary creatures can combine with any of the 29 Backgrounds (excluding Faceless One from each category), giving us 899 options for deck brews, which is a lot. With such endless possibilities, you too can be an Iron Chef and cook up something truly unique!

Instead of five courses, we'll take a "secret ingredient" (i.e., a commander with "Choose a Background") and choose five potential builds for them, one for each of the possible colors, all with evasion in mind.

A flexible creature type that also requires getting their hands dirty, Burakos, Party Leader provides a fun thought experiment in balancing power with flavor (heh). Generating Treasure tokens is no joke, but Burakos does require you to construct around the party mechanic in some manner, and they have to attack to yield the reward. That second requirement is what brought me back to Evasive Maneuvers.

Let's explore five courses of Burakos, each highlighting the different ways Burakos can get in safely for damage using evasive possibilities from each of the five colors.

So without further ado...Allez  brew!

The mantra of any effective professional restaurant or chef, mise en place, refers to having everything prepared ahead of time: everything in its proper place. Before we start cooking up our decks, for each of our "courses", if you will, we'll want to look at:

There are, of course, cards that can go into any Burakos deck. Think of them like your salt, or butter: they can belong just about anywhere and will enhance the other flavors we include later.

Here's a pantry of options to pull from that can be used in any of the following "courses." After all, who doesn't want Hot Soup with Burakos?! 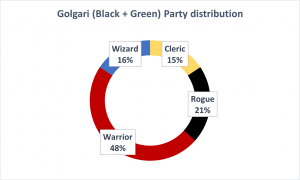 Let's start the meal off right — with bright, bold, fresh flavors that Green can only offer.

And what better way than to pay respect to our mentors? After all, we were trained by culinary giants.

Hardy Outlander seems better with a bigger commander, which doesn't mesh with Burakos's native two power. I'd rather pump Burakos with a Background than have to pump him for his Background to make much of an impact in the first place.

I actually quite like making Burakos big with Raised by Giants, then using Lure effects to make Burakos into a sort of Gorm the Great (and look, he's a Warrior!).

All we care about is Burakos attacking and not dying, and there really aren't that many creatures that will be able to block Burakos and kill him in the process with Raised by Giants. Plus, we're in green, so let's give him trample!

Some lovely toppings for our salad:

My, is this not the perfect deck for Ruthless Technomancer? Sacrifice Burakos for 10 Treasures, but only reanimate him for two, but he comes back as a 10/10?! What's next on the menu!?

Onto our second option: blue. Sticking with earthiness but adding more subtlety, we look to the wonders of blue (corn massa). 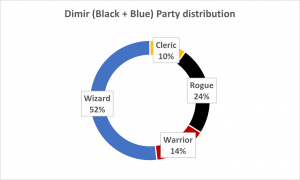 Clan Crafter allows us to convert surplus Treasures into card draw, even growing Burakos in the process so he isn't so likely to die in combat.

It's a good option, but if we're brewing with evasion in mind, my money is on Sword Coast Sailor. We can stack the trigger with Burakos to have the defending player either lose life first (from Burakos) or after to ensure that we still get our evasive potential with Sword Coast Sailor. This gives us a pseudo-Dethrone, but even better due to the way it's worded.

We also get access to some amazing ingredients in blue. Robe of the Archmagi equips to Burakos at a discount since they're a Wizard, which works great with Sword Coast Sailor. Call to the Kindred lets us effectively "cheat" a creature out of the top five cards of our library since they'll likely share a creature type with Burakos, and Lumengrid Sentinel or Junk Winder turns the Treasures that come in during our attack into a means to tap down potential blockers. Now that's evasion!

It's time to add some fire to the meal, and what better way to add a kick than with red? 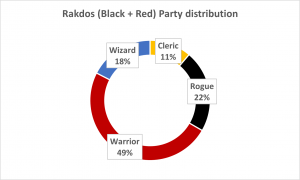 Welp, that's pretty much a "no" for evasive Backgrounds. I think either Guild Artisan or Street Urchin are our best bet here, relying on the 99 to get Burakos in safely. In true Rakdos fashion, we're likely to lean on things like menace as our go-to form of evasion.

I think a more flavorful option is leaning on things like "tunneling", like Goblin Tunneler, Pathmaker Initiate, Goblin Smuggler, and even Dwarven Warriors. As it turns out, they satisfy our Party conditions as well!

What we're left with may appear to be a more combat-restrictive variant of Prosper, Tome-Bound, but don't be fooled: Professional Face-Breaker, Harmonic Prodigy, and Combat Celebrant all add some neat synergy with the more aggressive style of play, and with Guild Artisan, we actually get swells of Treasures on our turn by going to combat rather than relying on chaining spells together. Both may be Rakdos and care about Treasures, but Burakos will enable swells of Treasures all at once rather than relying on impulsive draw (not knocking impulsive draw, which has its upsides).

Now, how about something a bit more sweet? 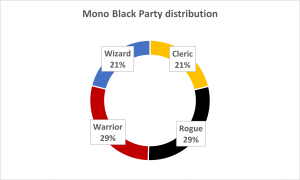 While you may not get a ton of varying flavors out of a chocolate cherry torte, there's something just lovely about simplicity. What it lacks in variety, though, it surely makes up for in depth and indulgence.

While it may be bittersweet (like chocolate!) to lose an additional color, mono-black Burakos is still nothing to shake a desert spoon at. Even others out there agree: just scope out the Burakos page with possible Backgrounds, and you'll be surprised to find that mono-black Burakos paired with Haunted One is actually the second-most popular option for a Burakos + Background pairing, trailing only behind the preconstructed Party Time deck's Burakos, Party Leader + Folk Hero pairing. Let's take a look at the possible pairings:

Haunted One is the obvious frontrunner and is the more telegraphed choice. Since Burakos will effectively be sharing a creature type with nearly every other creature in our deck, it allows us to attack in with Burakos and pump our board while also granting them Undying, a powerful recursive and even combo-potential ability with things like Persist (e.g., Cauldron of Souls). What's even more neat is throwing in things like Patriar's Seal, Honor-Worn Shaku, or Thousand-Year Elixir, since Haunted One only really cares about your commander becoming tapped, so untapping and re-tapping Burakos allows you to pump your board even bigger!

That being said, Haunted One doesn't exactly provide evasion, just insurance in case it gets blocked by something bigger or with deathtouch. Creativity is one of the criteria on Iron Chef, so can we think outside the box a tad here?

I'm actually fairly big on most of the Backgrounds in this deck. Agent of the Iron Throne means our Treasures start to push life totals in the right direction, Cultist of the Absolute gives flying and protection, Criminal Past grants menace, and Agent of the Shadow Thieves makes Burakos stronger with each combat and gives deathtouch.

I think Cultist of the Absolute is probably my favorite of the evasive options, as we get flying, ward, and a nice power boost. The sacrifice condition means we can lean more into an aristo-party build, with creatures like Vindictive Lich, Bitterblossom, or Whisper, Blood Liturgist, that create sacrifice fodder or otherwise want things to die. The ultimate mono-black suite spot!

And for our final course?

That's right, we're keeping classic French here and ending our meal with a cheese course, lest we draw the ire of Gyome, Master Chef! 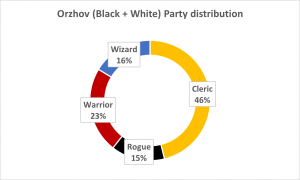 Let's start with the obvious: Folk Hero. It came with the precon alongside Burakos, which makes a great deal of sense, as with both you effectively have both card draw and ramp in the command zone, which is about as good of an engine as you could ask for.

As far as the 99 goes, a lot of it has been well crowd-sourced by the community. With magnitudes more decks being listed for either Burakos + Folk Hero or Nalia de'Arnise and the precon-effect in full swing here, Orzhov party is now an established thing. Clerics are your go-to tribe of choice here, but balancing with less represented classes may require you to dip a bit further into black, like Rogues and Wizards.

I quite like Flaming Fist as an alternative. Double strike may not technically be evasion, but the sweetness of the Treasures Burakos generates (white port) works nicely with the raw, pungent power of double strike (stilton). All that being said, I think my favorite option is Noble Heritage, allowing you to grow Burakos in size and possibly curry favor with your dinner mates. Solemn Recruit, Angel of Destiny, and Arashin Foremost are all party-themed double-strikers who can be grown with Noble Heritage, helping facilitate a true beatdown of your palette.

Well, my work here is done. It's now up to you — the judges — to decide which "dish" (color pairing/brew) you were most impressed with. You'll find your scorecard below, but please leave additional comments below for the chef, if you would be so kind.

As for me, I'll be honest that I actually ordered the Dimir pairing and will be busting it out for its debut on a literal kitchen table very soon. After all, as Andrew Zimmern so simply stated: what counts most is that your food (and decks!) make you happy.