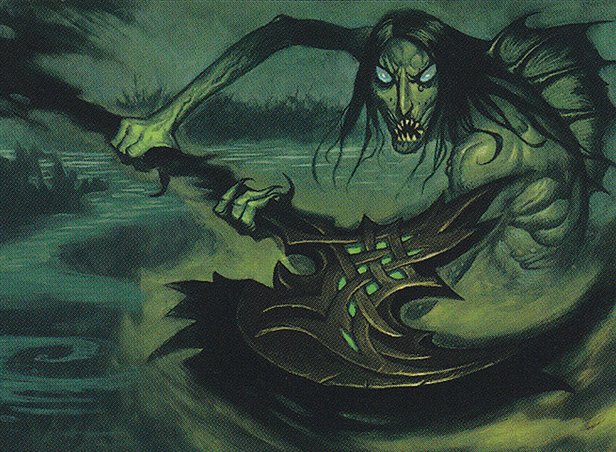 (Gift of the Deity | Art by Steve Prescott)

This week it's double trouble: we'll be lumping together Lure-effects with deathtouch. While each have enough support to warrant their own discussions, deathtouch and Lure are a match made in heaven, and I'd be remiss to try and squeeze an article out of one without mentioning the other.

The concept behind deathtouch was originally introduced in Alpha with none other than Thicket Basilisk, where it was originally a triggered ability. In Future Sight and leading into Lorwyn, deathtouch gained keyword status, and it was eventually transitioned to a static ability rather than a triggered one. As of now, the rulings for it can be found under 702.2c:

Deathtouch is one of those tricky keywords that skirts the line with evasion by acting as a deterrent for blockers rather than straight up "I'm getting through and there's nothing you can do about this." As a result, despite it not being as effective as other forms of evasion, it does create more decision-making and agency in-game, which I think is a good thing. For all its evasive faults, deathtouch is unquestionably a highly interactive mechanic.

Lure mechanics, on the other hand, come from the namesake, Lure, in Alpha, which compels all creatures that the defending opponent controls to block, if able. What deathtouch gives, in terms of agency, Lure takes away. A true dream team!

As is tradition, let's start with the breakdown of cards that have or grant deathtouch (n = 244), followed by what cards exist that inhibit deathtouch's potential. 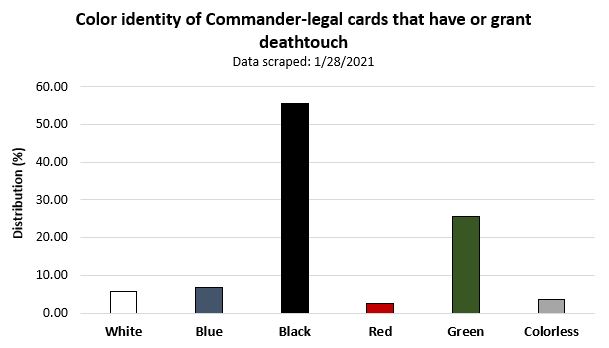 It's no surprise that deathtouch is predominately found in Golgari: between your Deathgaze Cockatrice and assorted Daggerback Basilisks, there's a menagerie of venomous villains at your disposal.

Unlike flying or Horsemanship, which have specific blocking requirements, any creature can block a creature with deathtouch. The question is: will they?

It makes a great deal of sense why Archetype of Finality sees comparatively little play against its starry keyword counterparts. Other than being a six-mana creature that can also die to a Reclamation Sage, there just aren't a lot of creatures printed with deathtouch, so its potential to strip away deathtouch is fairly corner-case outside of going against your Yarok, the Desecrated or Queen Marchesa lists.

People run Archetype of Finality 'cause they really want to give their other creatures deathtouch, plain and simple. When we look at its page, we see it's typically run in decks that have commanders that innately synergize with deathtouch, whether it's the proactive strategies, like Kelsien the Plague (306 decks, 46.9% of lists), to control the board and keep it clear of creatures, or the more reactive strategies, like Ishkanah, Grafwidow (161 decks, 36.8% of lists), who want to deter attackers from looking their way.

Mirror Shield is another card that can inhibits deathtouch's potential by outright inverting the combat step and killing the deathtoucher instead. As of writing (1/28/2021), it sees play in 2,294 (1% of possible) lists and for good reason: it's a budget-friendly Equipment that provides a toughness boost and hexproof, with a small corner-case of circumventing deathtouchers. As stated above, running Archetype of Finality just to meta-game against deathtouchers likely isn't going to do you much good, but the Mirror Shield provides so much additional upside, its Gorgon-gutting potential is just gravy.

With only two cards that can metagame deathtouch, it's a solid form of evasion, right?

Not quite. Deathtouch's biggest downside isn't a series of cards or a card that sees too much (or too little) play; it's your opponents' willingness to sacrifice blockers, plain and simple. If you're desperate to get in with your Isareth, the Awakener, Varragoth, Bloodsky Sire, or Oakhame Adversary for various effects, your deathtouch may deter the occasional blocker, but your opponent may also throw even their commander in harm's way if it means stopping your plan, let alone a chump blocker like a token or Reassembling Skeleton that they can get back.

While deathtouch has some 230+ cards to its name, mass Lure effects have roughly 30. There's an additional suite of effects that are targeted (e.g. Culling Mark), and nine cards that have Provoke, which target a defending player's creature during the declare attackers step, and can untap the creature to force it to block. Provoke was notably replaced by the fight mechanic after Legions. RIP Goblin Grappler — you were too young.

The color breakdown for these various Lure effects is as follows: 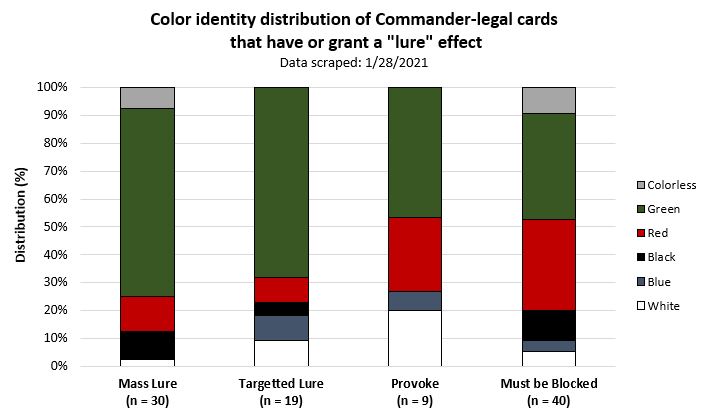 Predominately found in green followed by red, it makes sense why the colors of "Smash!" are associated with diversionary tactics and forced combat.

We see Lure effects crop up with fun mechanics like Rampage (e.g. Gabriel Angelfire, 29 decks, 90.6%) so that each successive blocker results in larger power boosts; indestructible commanders, like Rhonas the Indomitable (who also has deathtouch! 87 decks, 43.7%); or other commanders that benefit from brawling (e.g. Neyith of the Dire Hunt). We also see it paired with other high-synergy creatures, like Brash Taunter, or cards like Infiltration Lens to draw twice as many cards as there are opponents' creatures.

Lure effects can obviously be used for great evasive potential, by diverting the defending player's blocking decisions onto one creature, while the rest of your team gets through. Deathtouch can be a semi-effective form of evasion, so long as you (as the attacking player with deathtouchers) think your opponent won't want to block. Its effectiveness lies in creating uncomfortable decisions for the defending player, but as soon as they have expendable creatures or just really don't want to get hit by your Virtus, the Veiled, they likely can and will block.

Which is why the two were made for each other! Lure can be slapped on a deathtouch creature and not only divert blockers for your others to get in, but suddenly put you (the attacking player) in control to destroy as many creatures as you have points of power since only 1 point of power is needed to be considered lethal.

A tag-team of mechanics go hand-in-hand with the dynamic duo of none other than Virtus, the Veiled and Gorm, the Great.

Just like how Lure and deathtouch are partners, so are Gorm and Virtus, each embodying one of the respective mechanics. From a flavor perspective they are fantastically designed, with Virtus, the Veiled as the agile, small, black-aligned (remember our color stats above!) deathtoucher, and Gorm the Great as a lumbering, defensive diversion tactic in green.

The influx of support cards for deathtouch has been a godsend for Dana Roach and other deathtouch aficionados. Deathtouch tribal decks have long been able to create effective 'pillow forts' (more like barbed-wire fort?) to encourage opponents to look elsewhere with their attacks, but typically have struggled in closing out games, outside of combos or big spells (e.g. Exsanguinate). Cards like Ohran Frostfang, Hooded Blightfang, Vraska, Swarm's Eminence, and Fynn, the Fangbearer have been instrumental in beefing up deathtouch to be more aggressive than just defensive.

We pair some of these deathtouchers with a heavy amount of Lure effects, just in case Gorm the Great isn't available to us, or we want to slap a Lure effect on a deathtoucher to start clearing some pesky creatures.

Slapping a Lure on Toski, Bearer of Secrets lets our team get through for damage and card draw, and Toski remains unscathed. Anara, Wolvid Familiar (as well as Dolmen Gate) keeps Gorm, the Great safe to continue being the big distraction that he is, and they allow Virtus, the Veiled to swing with reckless abandon. Falthis, Shadowcat Familiar may be redundant with Virtus's deathtouch, but giving Gorm the Great deathtouch gets real nasty, and the menace for Virtus is over the top.

Putting it all together, we have a combination of mechanics and commanders so closely bonded that they could likely pull Gold at the next winter Olympics pairs skating:

That concludes our deathly duo!

But what do you think? Do you use deathtouch, and if so, for a more offensive or defensive strategy? Do you enjoy the support we've gotten for making deathtouch more aggressive? Do you prefer evasion that promotes decision making in combat, or just plain circumvents it? Sound off in the comments below!