Flash of Insight — 5 Lessons for Commander My Wife Taught Me

Well hello there! Welcome back to another edition of 60…wait. No, that’s not right this time. Sorry about that! If you came for my regular series on adapting 60-card decks for Commander, you’ll find that article is Unexpectedbly Absent this week. This topic is something that I’ve wanted to cover for a while, and several other writers for EDHREC agree that it’s a topic that we all could use a refresher on now and then. It just so happens that in September my wife, Ashley, and I celebrated our second wedding anniversary, so it seemed timely that I write this article. Get ready for some of these. Maybe…

In my professional non-Magic life I work in training and operations, so I am all about giving people the tools to succeed. This article’s goal is to use my life lessons to hopefully help equip you in your MTG adventures. I’m no relationship expert by any means and have a tendency to embarrass my wife with hijinks, so please don’t take this as gospel. I’m sure we all hit a rut now and then when it comes to Magic or our real life, so hopefully the lessons I’ve learned (some the hard way) can at least be a Flash of Insight for you in your nerdier pursuits of life.

Lesson 1: Communication can fix many problems

I’m going to be totally honest here; I suck at communicating with those close to me. I’m a guy, and many times I would just rather process situations or emotions internally than talk things through. My wife, on the other hand, is quite the talker. She loves hosting people and can be the life of the party. Unfortunately, when it comes to communication between us, we can be on different pages. Whether it’s what we want for dinner (our most common fight) or planning a trip together, we don’t get the information to the other. We assume the other will just go along with what we had in mind and don’t give all the information needed, a recipe for failure. How many times have you sat down in a Commander pod with people you don’t know and wondered “what types of decks do these folks play?” You casually slip out your tuned Kozilek, the Great Distortion control deck and notice everyone else has…lackluster commanders. As you proceed to crush the other players all at once, afterwards there is an awkward silence telling you they don’t want to play another game with you, or even share the air in the room with you.

So you offer up “Well, I have this Ayli, Eternal Pilgrim cleric tribal deck to play instead.” And it works, the power level is all equal and everyone has a blast. Someone at the table says “Why couldn’t you have played that deck to begin with?”

As Magic players, there’s a stigma that we suck at communication. This whole scenario could have been avoided if we had just led off with some small talk like “What’s your favorite commander/playstyle?” We could have learned a ton about the other players and helped level set expectations, skipping the sour game and diving right into everyone having a blast. Ultimately, this is a game meant to be fun. If we can Anticipate what others look for in their games we can save everyone lots of hassle and enjoy the game.

Lesson 2: Just because you’re having fun doesn’t mean everyone else is

Does anyone else remember that one card from Conspiracy: Take the Crown? It was a commander that lots of people were split on. Either you loved it or you hated it. Most HATED it. What was it…oh yea! He wasn’t fun. There was a very VERY narrow group of people who liked playing Leovold, Emissary of Trest, and an even smaller group of people who liked playing against him. I can’t even show you his face because that stupid smug grin of his induces traumatic flashbacks for many. The type of gameplay he encouraged may have been fun for a few, but many bemoaned sitting down to play against him.

In in case you couldn’t tell by my articles or bio, I’m naturally a competitive person (who did like Leovold, Emissary of Trest). I played football in college at the NCAA level so my mindset is just naturally geared to be competitive about everything. Ashley though, is not a competitive person. Far from it. When we have board game nights she is all about sharing the fun and team games. I tried once to explain how Magic works and it just wasn’t for her. King of Tokyo? Sure. Exploding Kittens? Absolutely. 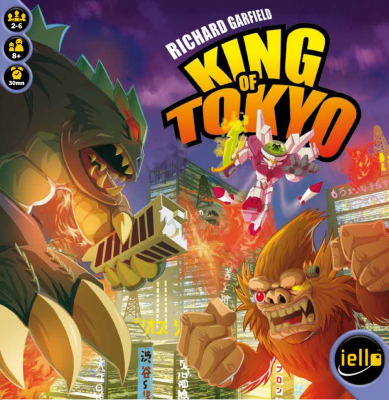 If your LGS sells these, buy them. They’re wonderful

Ashley, being the host that she is, loves having people over for game nights. On the opposite end of the spectrum I have a tendency though to get a little…motivated to win. Sometimes it gets to the point where she doesn’t enjoy playing with me and asks to switch games. I can be a Leovold and Aggravate her without even realizing it. I had to learn the hard lesson about making sure that I wasn’t killing the fun for everyone else. It might mean that I don’t win EVERY game against her, but it DOES mean that I get to keep having those experiences with her and others, which is the goal. I guess my point here is this: Don’t be a Leovold. Which brings me to my next lesson!

Lesson 3: Sometimes you win by losing

Every experienced Commander player has sat down with someone at an LGS before who has NEVER played before. Whether it’s at a prerelease, Commander night, or even just standing at the counter looking through cards, you have encountered what we call in my playgroup as the “baby seals.” They’re so innocent and don’t know what they’re about to get themselves into. I say this in a good way of course. If you told me when I was 11 that Magic would go as far as it had for me, I’d never have believed you. When those baby seals sit down to play Commander with strangers for the first time it can make or break whether they keep coming back. They say first impressions are a big deal and even with Magic this holds true.

You know that phrase everyone tells newlyweds during their engagement, the one about “happy wife, happy life?” Well guys, it’s true. At least as far as I can tell. Nobody tells anecdotes about the husbands “waking up grumpy, days gonna be lumpy.” That’s just a Tuesday after all. So in order to keep Ashley happy, sometimes it’s taken me letting her win a time or two (yes, LET her win) so her first impression of a new game I like isn’t a bad one. She won’t play games she doesn’t like, after all, no matter how much I beg. Even though my wife enjoys the previously mentioned King of Tokyo game now, that wasn’t always the case. Lord Kong wore out his welcome quickly before I started to lighten up with the “win every game” attitude. Once she won a game or two she was able to see why I enjoyed it, which helped her to enjoy it more. It was a small sacrifice on my end that meant a great deal to her. Maybe next time you sit with a baby seal who pulls out his unsleeved 104-card Boros Allies deck with only like, three actual Allies in it, let him cast Boulderfall even if it means you don’t win the game. Build others up and let their confidence grow. You don’t HAVE to make it obvious or show them you could have stopped it. Remember that they came to have fun and so did you. Let them win a game or two to create goodwill, and I’m sure you’ll have a new player for your group in no time. You wouldn’t crush their dreams now would you?

Let’s be real for a second; everyone remembers the fun memories more than the bad beat stories. I’ve played enough games of Magic to know that the bad experiences blur together, but those laughs and great memories stand out on their own. If you asked me about the best Brainstorm I ever cast I would know just the story without hesitation (it’s embarrassing but great.) On the same note if you asked me how far I could throw a Banisher Priest like it was a shuriken ninja star, I also could tell you and laugh about the story why. Seriously, this guy is totally a Leovold

You don’t have to spend much time on the World Wide Web to see that there is a ton of negativity out there. Many players of this fantastic game use it as an escape from the troubles away from their playmats. It doesn’t make help to dwell on that negativity with a hobby. If you are one of those folks that like to collectively dump on other peoples stories, maybe you could use one of these friend… There! Isn’t that better? Things are so much neater when you’re trying to look on the bright side. We choose our friends because we enjoy the time we have with them, not because they drag us down. I didn’t marry my wife so I had someone to gripe to(or gripe at me for that matter) so why would I waste my breath weighing her down? This isn’t to say that you have to be Chris Traeger all the time, but a positive outlook certainly can’t hurt!

Lesson 5: Slow down and enjoy the ride! Ashley and I both can suffer from tunnel vision when we get motivated to do whatever it is we are doing. Life isn’t just a series of boxes to check off or accomplishments to complete, there is a journey that we’re all in together. My wife is terribly motivated by goals, and I am very “go with the flow,” so you can imagine the clashes we’ve had when it comes to our days off. It works out though, since we both balance each other out when she helps keep me moving forward, and I help her slow down and appreciate smaller things now and then. Maybe this point is only important to me because it’s the only thing I’ve been able to teach my wife, but then I’m sure we all need reminders now and then.

Thanks for your time again everyone. I’ve really enjoyed being a part of EDHREC up to this point and hope to be a part of it for a long while moving forward. That is, until Jason fires me on his podcast. Again. I’ll have more of the same for you next time around with a reader requested deck. I hope you enjoyed reading this as much as I enjoyed writing it. See you next time!