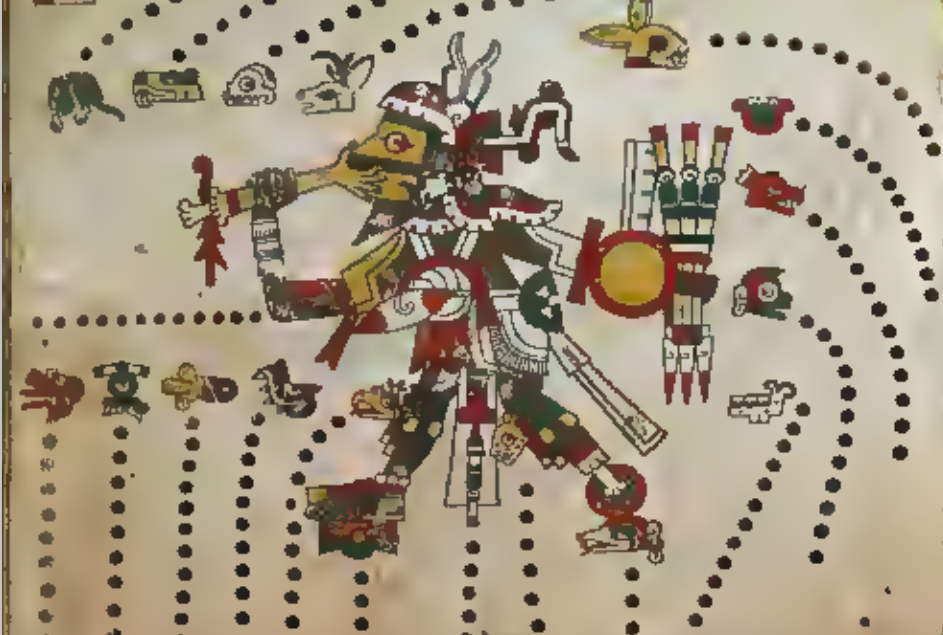 Not those cycles, godsdamnit! Not cycling! No, the cycles to which I here refer are a staple of Nahua and Tenocha-Mexica cosmology—and they refer to the nature of reality and the world. This is surprisingly relevant as of Rivals of Ixalan and the unleashing of the five Elder Dinosaurs near Orazca. Why, you ask? Because of the Nahua/Mexica (Aztec is an 19th century term that neither the Mexica or the Spanish used but it’s catchy so it stuck, more's the pity) cosmology conceived of the world as being cyclical—creation, destruction and rebirth under a new prime god, or sun.

Today, we’re going to examine the myth of the Five Suns and how the five Elder dinosaurs play into it—basically, that the world was destroyed four times and remade, and that current humans were inhabiting the fifth such world. The Mexica imposed a regular ‘scheduled’ apocalypse every fifty-two years, unless humans gave enough sacrifices. It’s a longer essay, but this was both politically, culturally, and religiously expedient for the Mexica to propagate as a belief as a fledgling empire with many uncertain allies.

A quick note: mythology is a many-headed thing, especially creation myths, which have countless variants even inside the same culture. The Mexica, as a Nahua speaker, shared versions of this myth, but tended to venerate their patron god Huitzilopochtli over Tonahtiuh, the final sun. Without further ado, let’s go forth!

What's God Got to Do with It? Tezcatlipoca, from a Mixtec codice showing him as the center of the universe, wearing the day-signs.

Tezcatlipoca, the Smoking Mirror. God of sorcerers, the mundane (as in worldly phenomena), and trickery. He is compared to the night wind in the Cantares Mexican—invisible yet present. Tezcatlipoca has a wide range of titles—the Enemy on Both Sides, Enemy, Mocker. He was the first sun, ruling over a world of giants until his chief rival, the famed Quetzalcoatl, wrested control of the sun from him. In a huff, Tezcatlipoca sent a swarm of jaguars to end the world, devouring the giants and generally laying waste. If that’s not on a metal album cover somewhere, I will be very surprised. But it probably looked something like this, except with more cow bell.

The Elder Dinosaur that most closely references this is Tetzimoc, the Primal Death. Fun fact! The name is a probable portmanteau of the Nahuatl word ‘tetic’ (strong/strength) and iztzoc (to be)—therefor the closest translation I can cobble together with my fledgling Nahuatl is ‘He who is strong’ or something to that effect. While Ankylosaurs aren’t usually associated with jaguars, the night and sorcery, the color and the use of ‘prey counters’ fits well with the image of Tezcatlipoca as a rogue-like god who encourages strength through bringing others low. If you want to rise high, everyone else must be brought down—a view that is very much in Black’s wheelhouse. Tezcatlipoca was eventually toppled from the celestial throne, leaving his hated rival, Quetzalcoatl, to make the new world and establish hegemony.

Ehecatl-Quetzalcoatl (to the right) and a sacrifice from the Codex Borgia. Note the duck-like mask, a consistent trait of this deity.

Quetzalcoatl is one of the few Nahua gods most people could name without consulting a book. The Precious Serpent has a false repute for being one of the few gods against human sacrifice, a laughable suggestion in a cosmology that put as much focus on personal sacrifice as the Nahua did. More to the point, in this myth, he is revered as Ehecatl-Quetzalcoatl, god of winds and knowledge. He is more easily identified by his signature red duck-like mask. He and Tezcatlipoca hated each other, but more in the feuding brothers manner than the more western dualistic, good versus evil sense. At any rate, once Ehecatl-Quetzalcoatl took over the new sun, through various whacky antics, the people of that world, whether through impiety or another cause, were transformed into monkeys. This world was destroyed by winds, fittingly. Oh man, if only there was an Elder dinosaur with flying and a suit of terrifying abilities. That would be a great transition to the Wind Sun. Oh hey there Zetalpa, Primal Dawn. Didn’t see you there. As the only flying legendary dinosaur, it’s a cinch to link Ehecatl/Quetzalcoatl, thematically. Not to mention one of the largest pterosaurs has the unlikely name of Quetzalcoatlus—apparently, to date, the largest animal ever to undertake independent flight. (http://www.eartharchives.org/articles/quetzalcoatlus-the-largest-flying-animal-of-all-time/)

The Wind Sun ended, leaving my personal favorite god to take up the reins of command. Tlaloc, He Who Makes Things Sprout, the Lord of Sustenance and the Thunderer, is hands-down my favorite major Mesoamerican god. In charge of life-giving rains, he is also one of the oldest deities—which makes sense for agrarian cultures to value the rain god above all. Lightning and thunder in all forms are his domain. He is usually depicted as having a mouth full of long teeth and a distinctive pseudo-handlebar mustache, and typically is painted the green of fertile earth. He also had a bit of a temper. The story goes that as Tlaloc ruled over the new earth, the third one now, a drought came. Naturally, the people prayed for rain with parched mouths while their crops withered in the dust. That was a mistake. Tlaloc, ever hasty and temperamental, granted their request. Technically.

Tlaloc gave the people of the third world a rain of fire, because when you pray you need to be very, very explicit about what you want. The fire consumes everything, and people only escaped the flames by becoming birds, or, in some versions, only birds survive. Some versions of the myth attribute this fit of pique to the loss of his wife, Xochiquetzal, a love-goddess, to our good friend Tezcatlipoca, but not always. The Elder dinosaur that most closely resembles this myth is Etali, the Primal Storm. Not only is the term ‘storm’ in his name, but his motif includes lightning, something also associated with Tlaloc. Not to mention, this dinosaur is clearly emerging from water, giving him another point of association with the storm god. Anyone who has a jade snake as a nose-piece is not to be trifled with.

Next up to rule the world was one of Tlaloc’s wives, Chalchihuitlicue—the goddess of rivers, standing water, childbirth, and in some of her forms, the oceans. Her name roughly translates to ‘She of the jade [or green] skirt’—a precious material in Mesoamerica as discussed previously on Historically Speaking. Chalchihuitlicue is depicted as a magisterial and beautiful figure in many surviving codices, clad in noble woman’s attire. When she takes over the fourth world, things go well at first. People are recreated and things are peaceful for a time.

As you may have noticed, the worlds of the five suns tends to end in catastrophe.
This one is no exception—Chalchihuitlicue drowns the world—and people either drown or magically become fish. This brings us to Nezahal, the Primal Tide. The most piscine and aquatic of the pentad of Elder Dinosaurs, the creature clearly belongs in a world flooded beyond the point of use by anything that doesn't use gills to get their air. It's connection with Chalchihuitlicue is admittedly tenuous, outside of it's strong association with water, but still, it has an alien, otherworldly feel to its art.

Ok, lets pause for a second. The earth has been made and unmade four distinct times, each time under the rulership of one of the major gods: Tezcatlipoca, Quetzalcoatl, Tlaloc and the Lady of the Jade Skirt. Finally, the gods decide they need a new strategy if they aren't going to have to constantly re-do creation.

They meet at Teotihuacan (in the Mexica version of the story), the City of the Gods, and decide what is to be done. Tezcatlipoca and Quetzalcoatl don't exactly patch up their differences, but they agree that in this new world they will leave each other to their respective realms. After much deliberation, and a story that is fascinating but too long to tell here involving a rivalry with an ostentatious god, the assembled deities pick Nanahuatzin, a deformed and pimpled god, to be the new sun because of his humility and goodness.

There is one catch; to become the sun, he must jump into a raging bonfire, letting himself be consumed entirely. Furthermore, in order to sustain him (the Mexica iteration of this myth continues) he must be kept fed by human hearts to keep him moving across the sky. Nanahuatzin does so, plunges into the flames, and the current sun (And world) was born, becoming the new deity, Tonatiuh.

Ehecatl/Quetzalcoatl, in some versions, sacrifices the rest of the gods to provide start-up fuel for the newborn sun; a stark contrast to the popular (and erroneous) view of him as a god opposed to sacrifice. The other gods get better after sacrifice, but that's hardly the point.
This leads us to our current sun.

Tonatiuh is a more hands-off deity than his predecessors, due in part to the previously established truce between Tezcatlipoca and Ehecatl-Quetzalcoatl. He accepts the sacrifices made to him, but worship of Tonatiuh was relatively muted among the Mexica compared to their veneration of their war god, Huitzilopochtli, who was also a solar deity. However, this fifth world was said to be doomed by earthquakes, when the end inevitably comes. Whether this is one mega-earthquake that shakes the world apart or a series of catastrophic tremors, is unclear. What is lovely about this is the reference to the 'earth walking' in his flavor text, tying him clearly to the end of the five-sun cycle and the association with earthquakes.

See you next month!