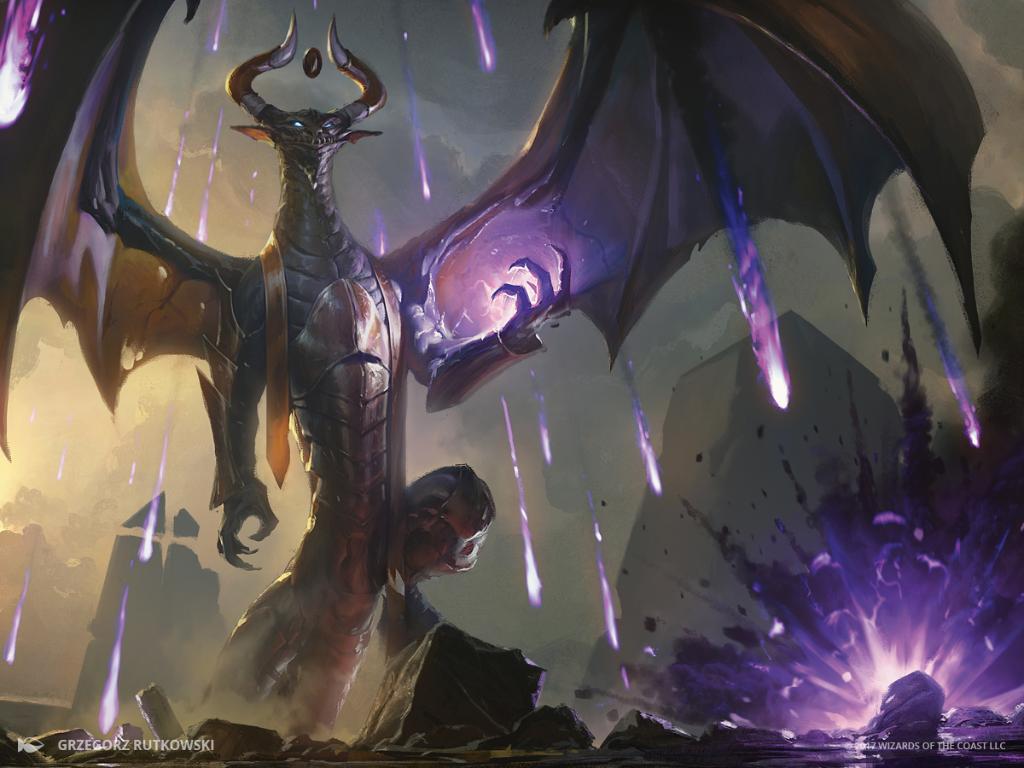 Hello, everyone! Are you excited? I'm excited! If you're wondering why I'm excited, today was the end of "spoiler season" for the upcoming Magic: The Gathering expansion, Hour of Devastation. This means that every card in the set is now released, and everyone will be rushing to get their opinions out there. I'm no different, and today I get to bring you something a little different than my regular article series, The Underdog's Corner. I have the privilege to bring you a review of some cards that may have homes in some of your EDH decks! Specifically, I'm going to be covering the black cards of Hour of Devastation, and where they may have homes. Enjoy! Are you tired of seeing -1/-1 counters being slung everywhere and deathtouching snakes appearing out of nowhere? Well, I've got some bad news... Hapatra, Vizier of Poisons makes great use of -1/-1 counters, and this card adds even more support to her venomous army. Hapatra curves into this, and each time your opponent casts a spell, you place a -1/-1 counter onto this Zombie Crocodile Demon (what an amazing creature type). Hapatra makes snakes, and Nest of Scarabs turns the Ammit into a makeshift Noosegraf Mob. While most of the cards with -1/-1 counters seem to get slam dunked into Hapatra (and this does get consideration), Banewhip Punisher probably finds a better home in The Scorpion God. Drawing cards is always better than not. Three. Mana. Wrath. We don't get those often. Your lands won't untap (ANY land, not just the ones tapped for the spell), but clearing the board for so cheap is worth consideration. We'll soon see if the exert-esque downside is worth it. I really like how the rares with Eternalize were handled with how they have a "power matters" theme. My mind always goes to Sidar Kondo of Jamuraa whenever I see a creature with power 2 or less, as he offers evasions. Pump Dreamstealer after it's not blocked, and your opponent won't be happy. I think there's some interesting territory with this card, especially since Menace is tacked on. Destroying creatures has always been in black's wheelhouse, but getting access to exiling creatures has been a bit more uncommon until recently. There are actually several other options that exile at four mana, but this is one of the least color-intensive as well as being one of the few that can be played at instant speed. Other cards with this effect include: Gild, Silence the Believers, Oblivion Strike. That was my reaction to first reading Razaketh, the Foulblooded. Just... Wow. This demon is a monster. 8/8. Flying. Trample. And that's the weakest part of it's card. Its second line of text is just absurd:

"Pay 2 life, Sacrifice another creature: Search your library for a card and put that card into your hand. Then shuffle your library."

No, there is not a mana cost. No, there is no "nontoken" ride. No, it is not limited to sorcery speed. Yes, it is ANY card to your HAND. Everything that is usually tacked onto these powerful abilities to limit their applications are absent. Get ready to see this card a lot. While a lot of cards I've talked about have pretty niche places in the format, I'm ready (or not) to see this creature pop up all over the place. Token decks can use it and lifegain loves it. Kaalia of the Vast is crying in a corner from joy, and reanimator strategies are still having to be convinced this card is indeed real. There is already a gratuitous number of combos with Razaketh being formulated, and let's not forget that this is just another toy for Necrotic Ooze. Absurd. Insane. Powerful. This demon is the real deal. I saw a lot of comparisons to both Killing Wave and Exsanguinate when this card was spoiled. That is to say, the consensus on Torment of Hailfire was highly contentious. This will likely find a home in big-mana decks like mono-black, or a strategy that is out to make your opponents miserable.

Since there has been confusion, the process of an opponent sacrificing a nonland permanent, losing life, or discarding is done X times, not X+1, per the Hour of Devastation Release Notes. Indestructible. Zombies. That's a terrifying thought. While limited to only targeting "attacking" zombies, there may be a few budget decks that could benefit from this. This is very much a card that could slide into Hapatra, Vizier of Poisons or The Scorpion God. While not as cost-effective as Go for the Throat or Doom Blade, the added synergy of -1/-1 counters may earn it a slot. It's a more expensive Diabolic Tutor that comes with Cycling B attached. Potentially a fit in very budget decks. Shout out to everyone currently making a casual curses deck. I'm with you, and the more curses we get the better. Certainly an annoying effect (as most curses are), this may be a thorn in your opponent's skin.

That's it! Let me know what you think of the set, and what cards you're planning to fit into your decks! Especially if I overlooked a card!