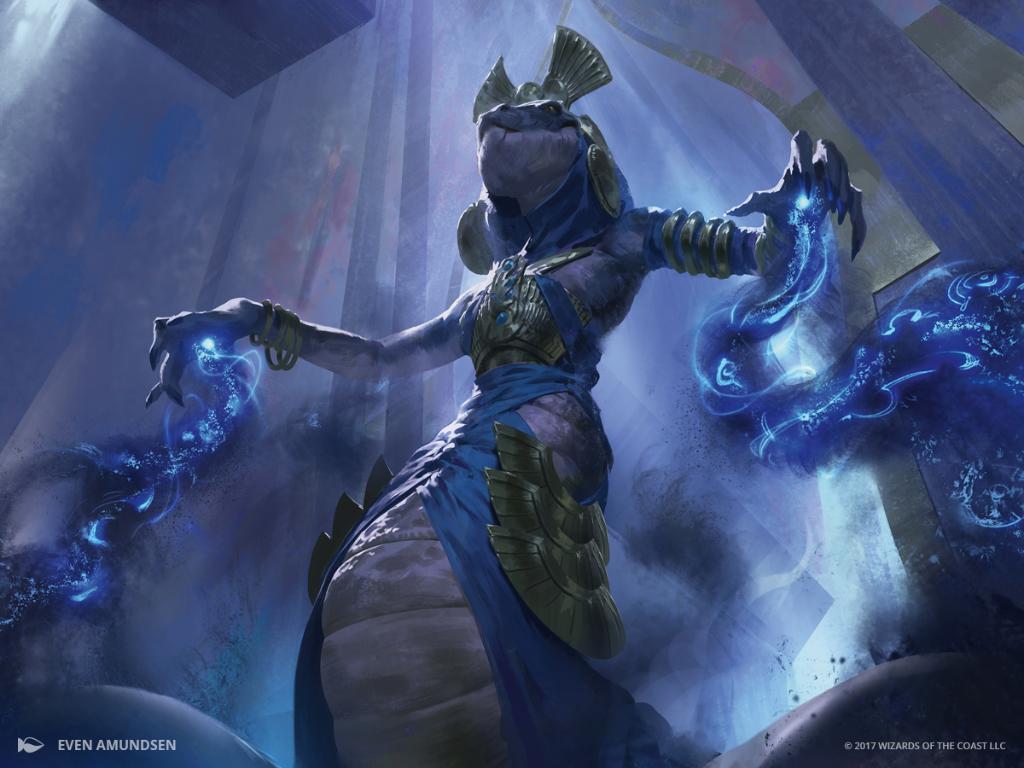 Welcome to Hour of Devastation review of blue, where we will take a look at the most powerful offerings from this small set. Maybe I should have said most devastating offerings. I’ll be here all week, or at least until the end of the article. I would be remiss if I didn’t start off with the mythic blue legendary creature of the set, Unesh, Criosphinx Sovereign. Is the best card of the set? Probably not, but it will see play, and it will enable all the sphinx tribal decks out there to actually get the average casting cost to something that resembles a normal mana curve. Not only that, he himself is a slightly smaller Sphinx of Uthuun, which is one of the best top end blue creatures EDH has to offer for control players. This card is interesting. When we think blue zombies, we think about recursion as the lynchpin strategy for the deck. However, Hour of Eternity negates that plan, full stop. So where does the zombie synergy card fit? Token decks can get some use from any Chasm Skulker that may have found its way to the graveyard. Finally, it could be a great finisher for The Scarab God after a board wipe. 4/4 zombies are nothing to sneeze at either, they are upgrades to a lot of early dorks into something much stronger to finish a game with. Be still, Ephara, God of the Polis’ heart, for your need for a more flexible Disallow has came to answer your prayers. Flash bird wizards are something Ephara decks already want to play, like Aven Mindcensor, but now you can leave up the mana for a counter and draw, or a 3/1 flyer and draw a card. Nimble Obstructionist could easily slot in any other blue deck out there that wants another flying threat. Not a flashy card, but the utility should turn this into a staple for control decks. Pair with Traumatize, a fruity red wine, and a medium rare steak for a great dinner. If you’re looking to mill people, you probably want to mill out one person at the table more than anyone else. You know the one, the person who just countered your Forced Fruition. That’s what Fraying Sanity is for. Revenge. And a nice dinner. Pick an Izzet commander, and they will happily want to have any of their spells copied for free. Swarm Intelligence will likely find a home in, of course, The Locust God, but also any other wheel commander like Nekusar, the Mindrazer or Arjun, the Shifting Flame. While the converted mana cost is a bit steep at seven, it is unlikely to see play outside of very spell-heavy decks. It will see enough play that you might want to pick up a copy or two for yourself.

Vizier of the Anointed Vizier of the Anointed is a niche card, for the people who really love to make block-focused decks, or keyword-tribal decks. This cleric is going to make or break games for those decks as it is an engine unto itself, drawing and tutoring for cards. This is a great source of card draw for a zombie deck, as you will want to go aggressive most of the time. Eternal of Harsh Truths also already has the zombie type and punishes anyone who dares block him. Just the way Nicol Bolas, the God Pharaoh intended it. Strategic Planning was first printed in Portal Three Kingdoms, and reprinted once more in Commander 2013, so it isn’t unreasonable to mention it here. Anywhere you need to dig to a combo piece, this will be an option that is hard to pass on. Tragic Lesson has the moonfolk ability that allows you to return a land to your hand, which is sometimes super useful. If you need your Tolaria West back in hand to transmute for Pact of Negation or if you just want to get your hand full for a really sweet Windfall. This is almost the inverse of Compulsive Research. Some decks might consider Tragic Lesson over Compulsive Research.

Seer of the Last Tomorrow Part two of the mill cards in Hour of Devastation. That is what most people would think, but you and I? We know better. Seer of the Last Tomorrow is perfect for Sidisi, Brood Tyrant. It’s a creature, it mills you and is also a naga. How can you go wrong!?

That is about all that I saw in blue for this set, there are some real solid cards that re-enforce a number of archetypes here.